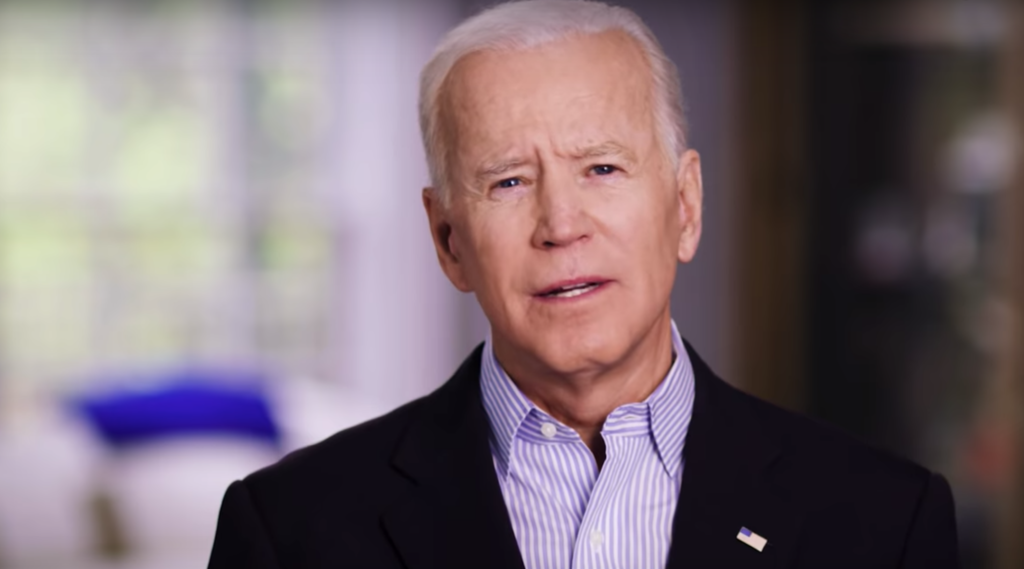 The launch underscored how much the battle for the Jewish vote has already figured in the campaign and, more broadly, how each party is endeavoring to attach the taint of anti-Semitism to the other.

“Charlottesville, Virginia, is home to the author of one of the great documents in human history,” the former vice president said in a 3 1/2-minute video he posted Thursday morning. The reference was to Thomas Jefferson, who authored the Declaration of Independence.

“Charlottesville is also home to a defining moment for this nation in the last few years,” he said. “It was there in August 2017 that we saw Klansmen and white supremacists and neo-Nazis come out into the open.”

Biden spoke over footage of the marchers saying “Jews will not replace us.” He described them as “baring the fangs of racism, chanting the same anti-Semitism bile heard across Europe in the 1930s.”

Biden referred to the murder of Heather Heyer, a counterprotester who was killed when one of the marchers rammed his car into a crowd.

“With those words, the president of the United States assigned a moral equivalence between those spreading hate and those with the courage to stand against it. And in that moment, I knew the threat to this nation was unlike any I had seen in this lifetime.”

Over the course of the weekend’s events in Charlottesville in August 2017, the president initially blamed both sides for the violence, a day later condemned the Ku Klux Klan and neo-Nazis, and on the subsequent Tuesday said there were “some very fine people” on both sides of the clashes.

Biden is the 20th Democrat to enter the 2020 race, and the debate has focused so far on a plethora of issues, including jobs, health care, military interventions abroad and the corruption investigations besetting Trump.

But the longtime senator’s opening gambit shows the degree to which Democrats plan to use Trump’s perceived jabs at Muslims, Hispanics, blacks and the disabled as well as Jews as a 2020 issue. Biden, even before he announced, was leading in the polls, and other candidates have not hesitated to call Trump a racist.

Republicans want to reverse that dynamic. Trump and GOP members of Congress have been eager to focus on statements perceived as anti-Semitic by a freshman Democrat, Rep. Ilhan Omar, D-Minn., and sharp criticisms of Israel by some Democratic presidential candidates, particularly Sen. Bernie Sanders, I-Vt., who is breathing down Biden’s neck in the polls. Republicans say the party has not done enough to censure Omar, and Trump has called Democrats “anti-Jewish.”

Biden, who has deep ties to the country’s Jewish and pro-Israel communities, said in the video that Trump’s presidency was an inflection point.

“We are in a battle for the soul of this nation,” Biden said. “I believe history will look back on four years of this president and all he embraces as an aberrant moment in time. But if we give Donald Trump eight years in the White House, he will forever and fundamentally alter the character of this nation, who we are, and I cannot stand by and watch that happen.”

Trump used the phrase “very fine people on both sides” three days after the violence at a news conference at which he sought to defend his initial comments on the day of the march when he blamed the violence on “many sides.”

“If you reported it accurately, you would say that the neo-Nazis started this thing,” he said at Trump Tower in New York. “They showed up in Charlottesville. Excuse me. They didn’t put themselves down as neo-Nazis. You had some very bad people in that group. You also had some very fine people on both sides. You had people in that group that were there to protest the taking down, of to them, a very, very important statue and the renaming of a park from Robert E. Lee to another name.”

Trump’s words shocked many Americans and led at least one of his Jewish advisers, Gary Cohn, to consider quitting.

Although the protests had been billed as a defense of a Confederate statue, a white supremacist group openly sought the permit for the march. Real-time television coverage showed marchers bearing neo-Nazi flags and torches while chanting anti-Semitic and racist slogans.