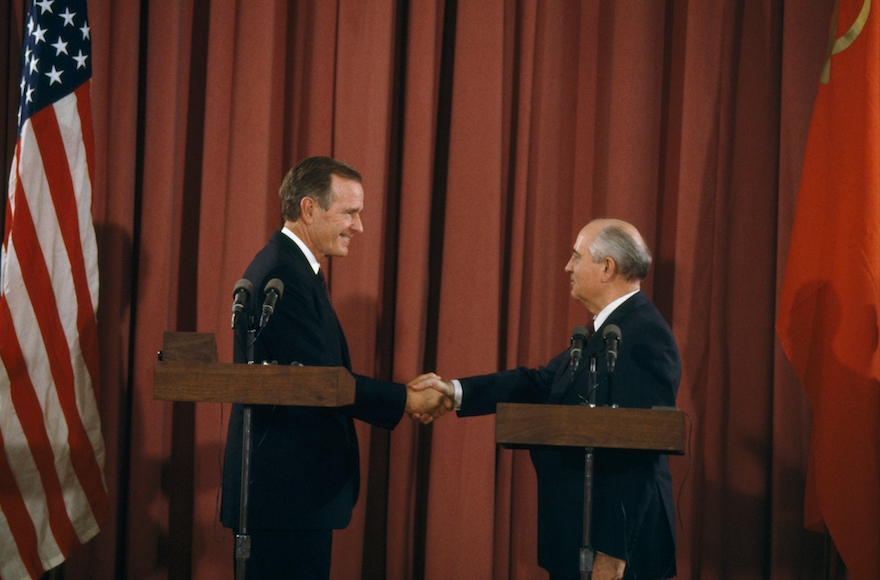 WASHINGTON (JTA) — When a president dies, the tendency is to put aside long-simmering resentments and consider the wholeness of his record.

So it was when Israeli Prime Minister Benjamin Netanyahu remembered George Herbert Walker Bush, who died last week at 94.

Despite the tense relationship with Israel that was a hallmark of Bush’s single term, the prime minister praised the late president for things that a younger Netanyahu fiercely opposed.

“We in Israel will always remember his commitment to Israel’s security, his decisive victory over Saddam Hussein, his important contribution to the liberation of Soviet Jewry, his support for the rescue of Ethiopian Jewry, as well as his efforts to advance peace in the Middle East in the Madrid Peace Conference,” Netanyahu said at the launch of Sunday’s Cabinet meeting.

In real time Netanyahu, a deputy foreign minister during much of Bush’s 1989-93 term, had a real problem with two of the Bush agenda items he now praises: how Bush handled the first Gulf War, and the demands he put on Israel in its wake at Madrid. Netanyahu’s opposition to the Madrid process made him persona non grata at the State Department.

Still, his praise for the process this week is not so much a matter of polite hypocrisy but a signal of how he has evolved: The principles underpinning Madrid now inform Netanyahu’s approach to peacemaking.

Netanyahu was the most outspoken member of Prime Minister Yitzhak Shamir’s government opposing the request from the Bush administration not to retaliate should Saddam Hussein provoke Israel after Bush pledged to drive Saddam out of Kuwait. Netanyahu said it was a “certainty” that Israel would retaliate.

After U.S. forces launched their war to oust Saddam and the Iraqi dictator launched missiles at Tel Aviv, Shamir decided to heed Bush; the president later thanked him for his restraint. Netanyahu was vindicated somewhat when Israeli military analysts came to believe that reticence to retaliate during the Gulf War emboldened Hezbollah to strike Israeli targets in subsequent years.

Bush also leveraged the U.S. victory over Saddam into getting Shamir to send a delegation to the Madrid talks. Shamir hated the idea of the talks, so much so that he sidelined his actual foreign minister, David Levy, who was open to the talks, and instead made a star of Netanyahu, who was relentless in his criticism of not just the talks but their land-for-peace premise.

Bush’s secretary of state, James Baker, was so frustrated with what he perceived to be Netanyahu’s obstructionism that he banned him from the State Department.

The Madrid talks led to the Oslo process, which launched direct Israeli-Palestinian negotiations.

Netanyahu built much of his subsequent career on saying that Oslo was a mistake because it promised the transfer of critical territory to an entity that Israel could not trust to secure it. It’s an outlook that has helped get Netanyahu elected four times as prime minister.

Instead, in recent years he has favored a multilateral peace that includes all major Arab players in the region; relies on Saudi Arabia to bring others into the process; and builds toward a final status plan through regional cooperation. Key to Netanyahu’s approach is that the Palestinians do not have the power to prevent other Israeli-Arab talks from advancing.

If that sounds familiar, it should: Bush 41 suggested something similar in a familiar context.

“What we envision is a process of direct negotiations proceeding along two tracks — one between Israel and the Arab states, the other between Israel and the Palestinians,” Bush said at the opening of the Madrid peace parley on Oct. 30, 1991. “This conference cannot impose a settlement on the participants or veto agreements.”