Before her suicide, a Dutch Holocaust scholar saw deep threats to her life’s work 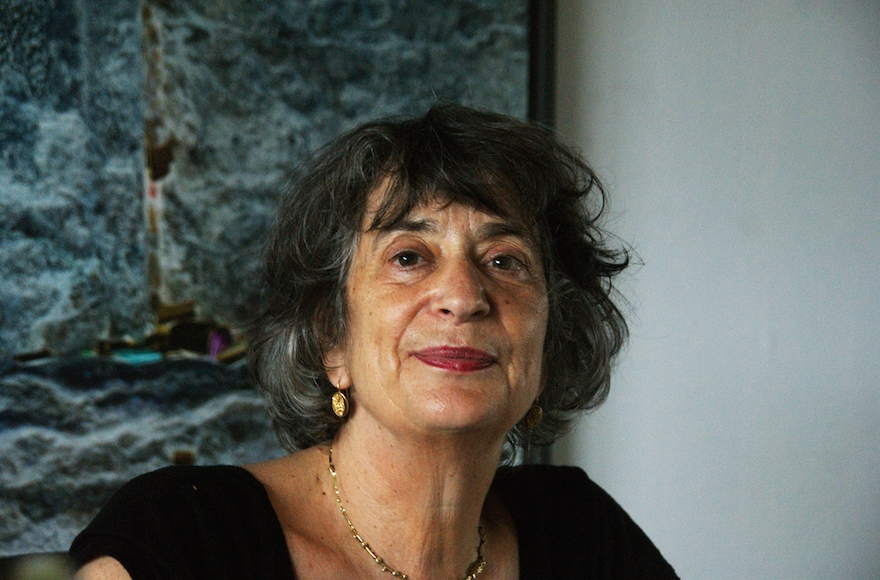 Evelien Gans was one of the Netherlands’ foremost scholars on anti-Semitism and the Holocaust. (Courtesy of Daniel Staal)

AMSTERDAM (JTA) – On July 19, Evelien Gans, one of the Netherlands’ foremost scholars on anti-Semitism and the Holocaust, jumped to her death from her fourth-story Amsterdam apartment, where she lived alone.

Gans, 67, a retired professor at the University of Amsterdam who had struggled with clinical depression for years, prepared her suicide with characteristic meticulousness. She left a carefully worded note for her life partner, Frank Diamand, and a last will and testament for her sister.

Yet only hours before jumping, Gans bought a two months’ supply of her favorite olive oil.

Diamand says the purchase shows that “her mind was on two parallel tracks”: Whereas one part was preparing an exit, another was determined to live.

In that internal conflict, he said, Gans’ focus on the persecution of Jews “didn’t help.” Nor did her growing disappointment in what she considered creeping Holocaust distortion and victim blaming by some members of her intellectual bubble, Diamand suggested.

And while Gans’ work was only “one factor out of several” that led her to take her own life, “having to deal with anti-Semitism day in and day out is not good for anyone’s health,” said Diamand, a child survivor of the Holocaust and award-winning documentary filmmaker who had been Gans’ significant other since 2006.

Gans described this effect in more vivid terms in her last major interview, which she gave to the prestigious Vrij Nederland weekly in January.

“It has gnawed away at me,” she said about her 2016 book titled “The Holocaust, Israel and ‘the Jew’: Histories of Antisemitism in Postwar Dutch Society.”

The subject of the book was never far from the mind of Gans, whose father, Marco, survived the war by hiding in safe houses, escaping from one to the other no fewer than 13 times.

“When she was 6, he already told her everything about the war years. How walking on the left side of the street or the right one could mean the difference between life or death,” Diamand said.

Gans was born in New York, where her parents moved shortly after World War II. The family returned to the Netherlands in 1954, when Gans was 3 years old, because her father feared the outbreak of the Korea War would trigger a third world war that would endanger his family in the United States, according to the Volkskrant daily.

In the final and pessimistic interview with Vrij Nederland, Gans spoke of an increase in anti-Semitic incidents both by radical Muslims – she cited a Syrian man’s anti-Semitic assault on a kosher restaurant in Amsterdam in December, among other incidents — and what she called “an obfuscation between perpetrator, victim, bystander and collaborator” in the Holocaust.

Gans was an award-winning writer who was recognized in 2002 with the prestigious Henriette Roland Holst literary prize for her book on Social-Democrat and Social-Zionist Jews. That year she began teaching at the University of Amsterdam, where she had been a professor of modern Jewish history until her retirement last year.

Last year, she retired from her long-held position as senior researcher of modern Jewish history and anti-Semitism at the NIOD Institute for War, Holocaust and Genocide Studies – Holland’s foremost organization of its kind.

A quick-witted speaker and interlocutor with a proclivity for sarcasm, Gans was a regular guest lecturer at the University of Michigan and other renowned international institutions. She was interviewed frequently in the Dutch media.

But Diamand said her retirement led to a loss of social structure, leaving Gans increasingly worried about whether she alone could finish the second part of a monumental biography of two Holocaust victims whose first part she published in 2008. Gans did not have children.

“Increasingly, she fell into negative thinking patterns that didn’t make sense and she became immune to rational analysis,” Diamand said.

After skipping a recent conference in Krakow, Diamand recalled Gans telling him that she was “done for” professionally because she missed the opportunity to meet several colleagues there — all of whom she already knew well and lived in the Amsterdam area.

“I told her it didn’t make any sense but I saw I was not getting through to her anymore,” Diamand said.

In parallel, Gans was waging an articulate war in the media against what she considered Holocaust obfuscation and inversion. Neglecting her own unfinished biography – she had to wade through 12 cardboard boxes’ worth of archive material, which she had arranged in the form of a wall in her study – she took on a former ballerina over her flawed family biography.

In that book, author Isabel van Boetzelaer claimed that her father, a Nazi SS volunteer who had served in Ukraine, had no knowledge of the Holocaust. She also stated, apparently without proof, that her grandfather had plotted to kill Adolf Hitler.

Gans’ friends were dismayed at the amount of effort that she had put into debunking an account so flimsy that few historians of her caliber felt merited their attention. Referencing this, her interviewers from Vrij Nederland asked: “Writing a book requires concentration. Will you be able to ignore signs of anti-Semitism and rewriting of history?” Gans answered that she would try but could not make any promises.

She had campaigned similarly twice before in recent years for historical veracity, feeling disillusioned and angry in the aftermath.

One painful episode involved historian Bart Van der Boom, who in a 2012 book claimed that non-Jews in Holland largely failed to help Jewish compatriots in the Holocaust because they did not know the genocide’s purpose and scope. Even Jews did not know this, he further claimed, or they would have escaped the minimum-security concentration camp of Westerbork.

Gans and her colleague, Remco Ensel, faulted Van der Boom for ignoring the cruel reprisals visited on relatives and friends of anyone who escaped Westerbork. But as Gans herself bitterly noted, her objections did not prevent the flawed book from being celebrated as a masterpiece, nor its author from receiving in 2012 the prestigious Libris History Prize — and the $23,000 in cash that went along with it.

Six years later, in her final interview, Gans revisited the subject, characterizing Van der Boom’s book as an ultimately successful attempt to “defend the actions of average countrymen” in a nation where collaborators worked with the Nazis to murder at least 75 percent of Dutch Jewry – the highest death rate in Nazi-occupied Western Europe.

Gans also was left drained and downtrodden following a dispute with Chris van der Heijden, a historian whose father served in the SS. Focusing on a handful of Jewish supporters of the Dutch Nazi party in the 1930s, van der Heijden “heaped anti-Semitic stereotypes” in a 2008 book, Gans told Vrij Nederland. In that book, Gans said, “The Jews allowed themselves to be murdered, collaborated and are now perpetrators” of similar crimes in Israel.

These polemics not only depressed Gans, Diamand said, but “made her enemies.”

As these and other issues continued to take their toll on Gans — a left-wing activist in the 1970s whose participation in violent protests acquainted her with the inside of a police car — she began drawing inward.

Things became so bad in the spring that she was hospitalized voluntarily for a month at a psychiatric treatment facility.

As an outpatient, she tried to participate in group therapy but felt too estranged from the other patients to discuss her issues in the group.

“I told her, ‘who cares, just use this group therapy tool to get better,’ but it was beyond her ability,” Diamand said.

Despite its broader context, Gans’ suicide is “ultimately a personal tragedy,” Diamand insisted. Her focus on the Holocaust and anti-Semitism, he said, was “a factor, not the factor” in her decision to end her life.

“A whole set of elements led her to her painful and wrong decision,” he said.