(New York Jewish Week via JTA) — Despite the swanky setting and the (mostly) maskless crowd in bespoke suits and dresses, UJA-Federation of New York’s Wall Street Dinner Monday night made very clear that the city — and even its most affluent denizens — still lived in the shadow of the pandemic.

There was an atmosphere of relief in the room, with the usual scenes of hugging, smiling and schmoozing that typify fundraising dinners. Hors d’oeuvres were eaten, awards were given and speeches were made.

But the ongoing effects of COVID pervaded the event Monday night at the Marriott Marquis in midtown Manhattan, and lent it an air of guardedness. Former Mayor Michael Bloomberg received the night’s main award, and Stephanie Cohen, an executive at Goldman Sachs, was also honored.

But in the first speech, former Goldman Sachs CEO (and current chairman) Lloyd Blankfein made a point of reminding attendees how the pandemic has bared their privilege.

“The lesson of COVID that’s most pertinent to tonight’s purpose is just how bifurcated our society is,” said Blankfein, who emceed the event..

“So let me say, at the risk of being provocative and sounding tone deaf, I had a pretty good pandemic, and most of my friends who live in the same bubble as me had a pretty good pandemic too,” he continued. “The market went up and we even made money. That is our bubble. But what about the rest of the world, the 99%? People in service jobs who had to show up or whose jobs didn’t survive the pandemic?”

The pandemic was also present in the attendees’ interactions. Before checking their coats and passing through metal detectors, they stood in a snaking line to show their vaccination cards and IDs — a process that New Yorkers have gotten used to. A huge sign on the way to the ballroom read “UNDAUNTED. RESILIENT. READY,” above a picture of people wearing masks. Those three words also scrolled on an electronic marquee around the room. Another sign was blunter: “LEADING IN COVID RECOVERY.”

The event raised a record $32 million for UJA-Federation, slightly above the $31 million haul of last year’s virtual dinner. And speakers reminded the crowd of the additional $70 million above its budget that UJA raised for COVID relief.

But Monday night’s proceedings were pared down from pre-pandemic levels, with only 700 in-person attendees instead of the 2,000 in 2019, and no actual dinner. Instead of sitting at tables, the crowd sat in rows to listen to the speakers. And conversations during the cocktail hour revolved around the strange normalcy of gathering after more than a year apart.

One attendee joked to his friend, “I don’t recognize you not in casual clothes.” Another estimated that half the men in the room had decided to go without ties this year. A group of younger men stood around a table talking about the results of the 2020 election in Orthodox neighborhoods.

And in addition to Blankfein, other speakers made plain that the purpose of the event was to give of their wealth to people who have had a harder time since COVID hit.

“The pandemic has been difficult for everyone, but it has highlighted the profound inequities in our society,” said Cohen, who was given the Alan C. Greenberg Young Leadership Award. “These are the headlines that don’t make it onto CNBC: One and a half million New Yorkers are struggling to feed themselves and their families right now.” 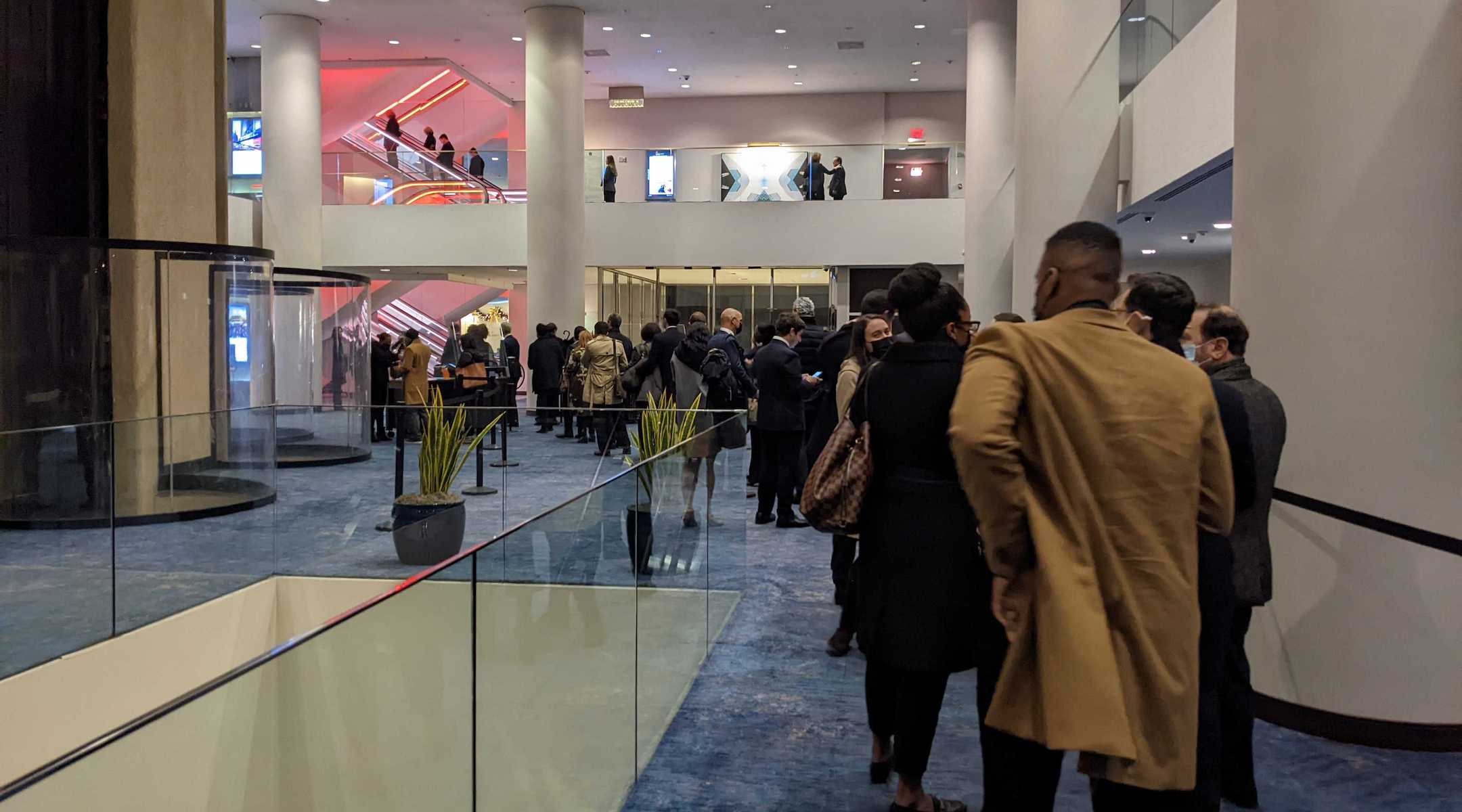 Attendees at the Wall Street Dinner of UJA-Federation of New York, held in Manhattan, wait to get their vaccine cards checked,Dec. 6, 2021. (Ben Sales)

The other theme of the night — which Bloomberg highlighted in his speech at the end of the event — was combating antisemitism across the political spectrum. Videos and speakers throughout the dinner lamented rising antisemitism, particularly the spike in attacks in New York that followed the May conflict in Israel and Gaza.

UJA-Federation CEO Eric Goldstein condemned the 2018 “Tree of Life massacre by a white nationalist” in Pittsburgh, and received applause when he noted antisemitism and anti-Zionism on the left. “There’s now a sense that having progressive values… is somehow inconsistent with living proudly Jewish lives or supporting Israel’s right to exist,” he said.

Before Bloomberg decried antisemitism in his own address, he basked in some of the crowd’s wistfulness for his unsuccessful 2020 campaign for the Democratic presidential nomination. TV star Judge Judy Sheindlin, who introduced him via video, said she wished he had been elected, drawing applause.

And Bloomberg got a dig in at Sen. Bernie Sanders, the Vermont Independent, in his speech. “I was not the only Jewish candidate trying to make history in that primary campaign, but I was the only one who didn’t want to turn America into a kibbutz,” the media mogul said of the democratic socialist.

The bulk of his speech, however, was a call to remove partisanship from the fight against antisemitism, which he said has turned into “a perverse form of whataboutism.”

“Too many on the right seem only concerned about antisemitism when it occurs on the left — and vice-versa,” he said. “When antisemitism appears in their own ranks, they try to ignore it. Or, they will say, in effect: ‘Well, the antisemites in your party are far worse than the ones in mine.’” He added that the fight against antisemitism should not be divorced from the broader fight against discrimination. He noted that while he opposes the movement to boycott Israel and the exclusion of pro-Israel students from progressive campus spaces, as mayor he also defended the rights of pro-boycott students to speak at The City University of New York..

Fragmenting the Jewish community along partisan lines, he said, only serves antisemites.