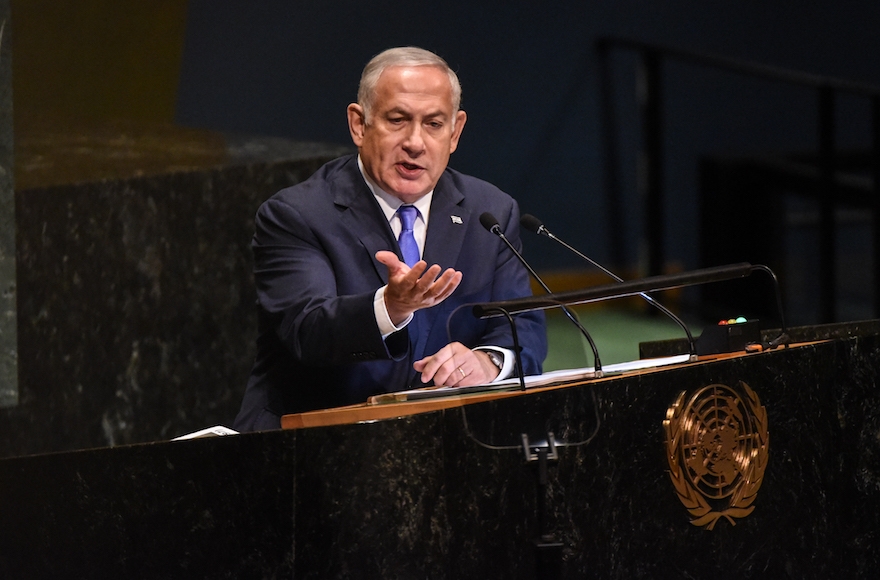 (JTA) — Palestinian Authority President Mahmoud Abbas, in an address to the United Nations, rejected criticism of the P.A. for paying monthly salaries to Palestinians who kill Israelis or the families of the killers.

“I pay tribute to our hero martyrs and prisoners of war,” he told the General Assembly on Thursday.

Meanwhile, Prime Minister Benjamin Netanyahu of Israel in his address unveiled the location of a secret Iranian atomic warehouse in Tehran and implored the International Atomic Energy Agency to inspect it. Netanyahu dedicated more than half of his speech to Iran’s nuclear transgressions and aggressions against Israel and other countries.

He reminded the delegates about Israel’s raid on a Tehran storage facility containing Iran’s atomic archive and chided the IAEA for not taking action against it. Since the raid, he said, Iran has been emptying the warehouse, including spreading more than 30 pounds of radioactive material around Tehran.

“What Iran hides, we will find,” Netanyahu said.

Netanyahu also spoke of Hezbollah’s threats against Israel and provided an aerial photo to show where the Lebanon-based terrorist group has hidden precision-guided missiles throughout Beirut.

Netanyahu said he was “deeply grateful” to President Donald Trump for his decision to withdraw from the Iran nuclear deal and that Iran’s economy has tanked since the U.S. reimposed economic sanctions. He said Israel had opposed the deal from the outset “because it threatens our future, even our very survival.”

One positive consequence of the Iran deal, Netanyahu said, was that it “brought Israel and many Arab states closer together than ever before, in an intimacy and friendship that I have not seen in my lifetime, and that would have been unthinkable a few years ago.” The Israeli leader also said he hoped “the day will soon arrive when Israel will extend a formal peace, beyond Egypt and Jordan, to other Arab nations, including the Palestinians.” 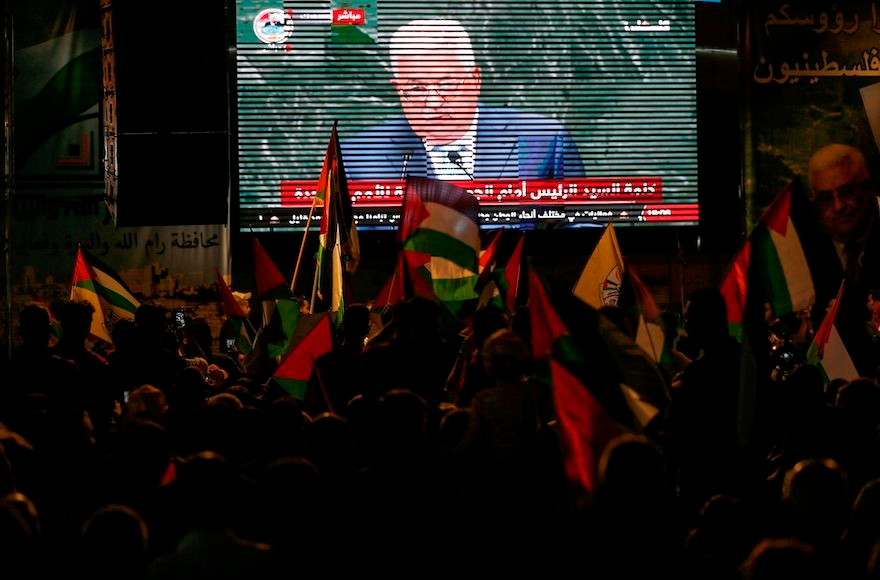 Netanyahu defended the country’s nation-state law and called it “downright preposterous” to accuse Israel of racism. He noted that more than 100 countries in the United Nations have one official language, 50 have crosses or crescents on their flag, and dozens define themselves as the nation state of a particular people.

Abbas, who was introduced as head of the “State of Palestine,” said the law will lead to “one racist state, an apartheid state,” and reminded the General Assembly that it had sanctioned South Africa for its policies of apartheid. He accused Israel of “legalizing discrimination against the Arabs of Israel and called on the United Nations to act to reject it and cancel it.”

At the beginning of his speech, he announced that “Jerusalem is not for sale. And the Palestinian people’s rights are not up for bargaining.”

Abbas said the Palestinians have participated in all peace initiatives and accepted every invitation to sit at the peace table with Israel.

“I reiterate that we are not against negotiations and have never rejected negotiations on any day, and that we continue to extend our hands for peace,” he said. “We only believe in peace. Peace is the only path. We don’t believe in terrorism and violence.”

Abbas accused Trump of sullying the peace process and of being “too biased for Israel” to be an honest broker.

“We welcomed Trump when he was elected and praised his announcement of peace plan, but were shocked by his actions concerning the process,” he said.

Trump “decided to close the P.A. mission in Washington, then recognized Jerusalem as the capital, moved the embassy to Jerusalem, and even boasts that he took issues of Jerusalem and refugees off the table. He even intensified his assault on international law by cutting humanitarian aid to refugees and funds to Palestinian Authority,” Abbas said.

Abbas said there would be no peace unless eastern Jerusalem is recognized as the Palestinian capital and the borders are drawn on the pre-1967 lines.

“Please do not try to outsmart us,” he said.

He said the Palestinians have practiced “peaceful, popular resistance” and are “resisting the Israeli occupation by legitimate means.” He said that while “settlers use arms against our people, we will continue to reject violence and use of weapons.”

He called on the world community to view the Palestinians “as humans. We are not redundant.”