Are the Schmaltz brothers of the NHL Jewish? 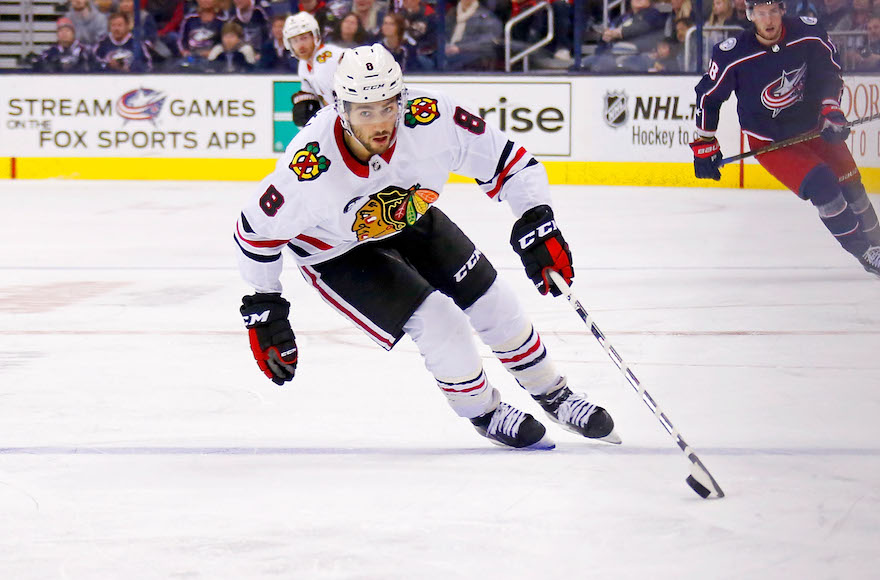 Nick Schmaltz of the Chicago Blackhawks controls the puck during a game against the Columbus Blue Jackets at Nationwide Arena in Columbus, Ohio, Oct. 20, 2018. (Kirk Irwin/Getty Images)

(JTA) — Nick Schmaltz is spreading around the puck this season as the NHL’s Chicago Blackhawks try to rebound from some lean times a campaign ago.

Schmaltz, a third-year forward, has 6 assists to tie for the team lead as the Blackhawks have jumped out to a 6-2-2 start, tied for second in the Western Conference’s Central Division. The club finished last a season ago and missed the playoffs for the first time in a decade.

For the uninitiated, schmaltz is the fat rendered from poultry used for frying or spread on bread especially popular among Ashkenazi Jews. (My mom always gave me a hard time for dipping my rye, even white bread; not healthy but oh so good!) Schmaltz’s teammates reportedly call him “KFC,” a reference to the fried chicken brand.

Nick isn’t the only Schmaltz in the National Hockey League, either. His older brother, Jordan, is a third-year defenseman for the St. Louis Blues. The Wisconsin brothers both played for the University of North Dakota and were first-round draft picks.

It appears that the Schmaltzes are not Jewish, however. The Jew or not Jew website says the family comes from German ancestry. But his name’s Yiddish meaning has earned Nick one great nickname.

The post Are the Schmaltz brothers of the NHL Jewish? appeared first on Jewish Telegraphic Agency.