Are Israeli media too soft on the country’s popular military?

JERUSALEM (JTA) — Like citizens in democracies around the world, Israelis are losing trust in their state institutions. In a recent poll by the Israel Democracy Institute, no more than 31 percent of the public trusts the government or the legislature, and only 16 percent trust the political parties.

However, one institution continues to garner nearly universal approval: the army. Nearly 90 percent of Israeli Jews say they trust the Israel Defense Forces, an approval rating reflecting the centrality of military service in a country where conscription is mandatory and hostile forces like Hamas and Hezbollah have thousands of missiles aimed at major population centers.

The army’s domestic credibility has sustained even a series of news reports claiming that the defense establishment had misinformed the public on a variety of issues.

Earlier this month, former Defense Minister Moshe Yaalon admitted that the country’s political and military leaders kept residents of Israel’s northern border in the dark about the presence of Hezbollah attack tunnels, telling them for years that the Lebanese terrorist organization was not digging under the border despite knowledge to the contrary.

Several days later, B’Tselem, a local human rights group, released video footage that showed Muhammad Habali, a disabled resident of the West Bank city of Tulkarem, being shot in the back of the head while hanging out outside of a local restaurant. The army claimed they were quelling a riot; the footage suggested otherwise.

In other democracies, such incidents might lead to a public outcry, or at least a series of heated media reports and calls for an accounting. The muted reaction to both incidents here, however, suggest to some that the Hebrew media are excessively deferential in their coverage of the army, reporting claims made by the spokesman as facts rather than assertions.

Part of the issue, one reporter said, is that a not insignificant number of local reporters first learned their profession through working for Army Radio or the spokesperson’s office.

“I think that the Israeli media in general is very much an establishment media,” said Oren Persico, a media reporter for The Seventh Eye, a local outlet that reports on media issues. He cited work by Sagi Elbaz, a media researcher who wrote a book describing how local reporters tend to take the accuracy of government statements “for granted.”

“It’s an unsaid state of thought that if the state proclaimed it, it’s probably true unless someone else says something else and you have to check,” Persico told JTA.

Yaalon, who had previously served as IDF chief of staff, acknowledged the Hezbollah tunnel subterfuge during an interview with Army Radio following the launch of an operation to clear out the tunnels.

“We did it to mislead the other side,” he said, explaining that his previous comments denying the existence of the tunnels were made “in order to preserve the security of the state.”

And while the IDF spokesman told JTA that “no tunnel, not even one, has been found in any of the places where Israeli civilians complained of hearing digging,” Yaalon had been less specific in his language: In 2016, he told a group of students that “we haven’t discovered a single tunnel” despite knowledge of Hezbollah’s operations. 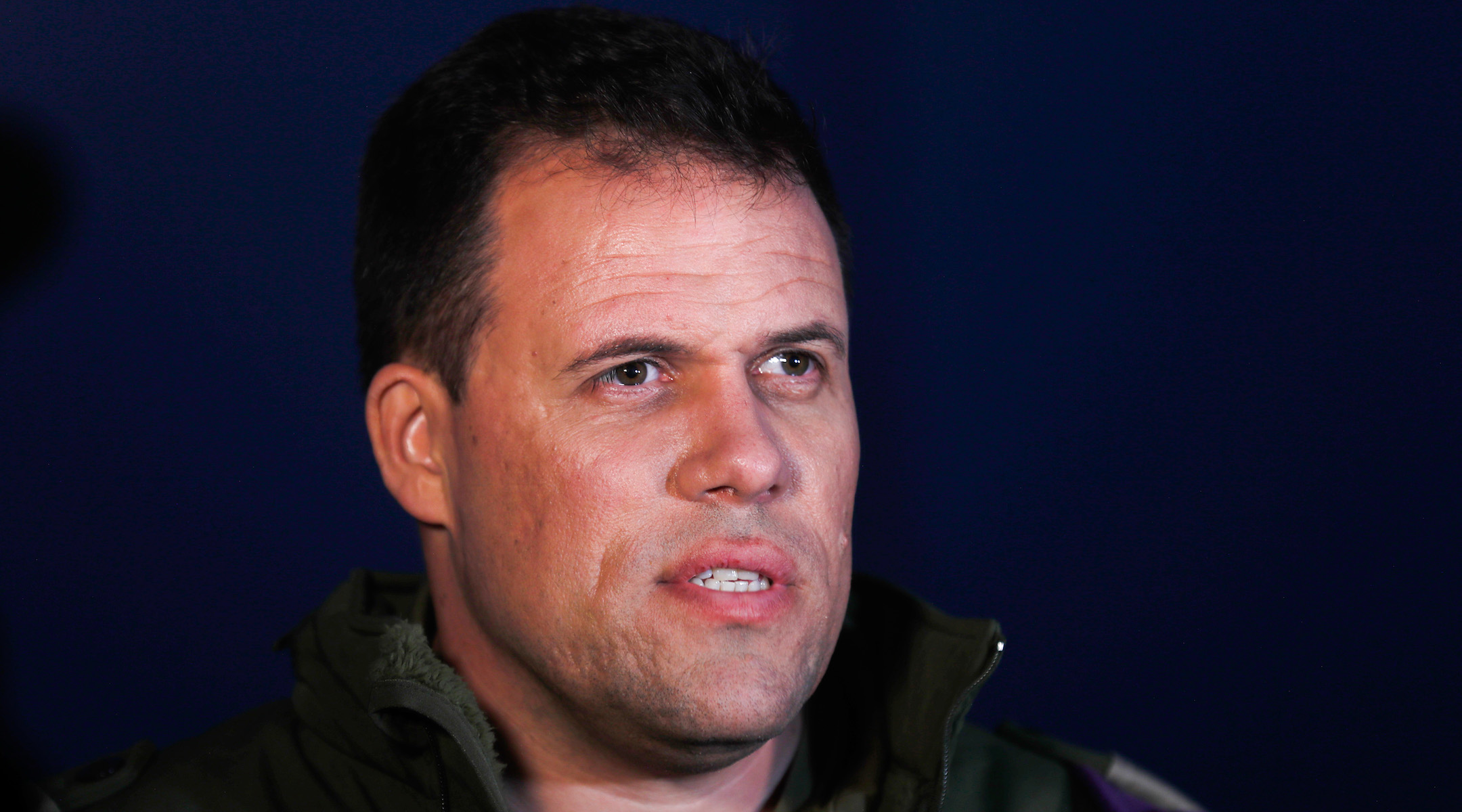 Lt. Col. Jonathan Conricus, IDF Spokesperson for Foreign Media, stands near a tunnel that crosses from Lebanon to Israel, on the border between Israel and Lebanon in northern Israel, Dec. 19, 2018. (Flash90)

According to B’Tselem, the army also misled the public about the shooting incident in Tulkarem.

“When the incident was made public, the military responded by claiming that a ‘violent disturbance of the peace had developed’ in the area, that ‘dozens of Palestinians were throwing stones,’” B’Tselem said in a statement. “The video footage and the eyewitness accounts collected by B’Tselem from people who were near Habali show no absolutely no of sign of any ‘disturbance,’ stone-throwing or use of crowd control measures.”

The following week, B’Tselem accused the IDF of “manipulating the truth” in its accounts of the deaths of two Palestinians teens killed in northern Gaza by an Israeli munition. Israel claimed he had been accidentally killed by an explosive used as a “knock on the roof” to inform residents that their building was about to be leveled. In a video posted to YouTube, B’Tselem and the British-based group Forensic Architecture alleged that the IDF intentionally omitted video footage showing that Israel’s highly touted method for warning civilians was not as safe as popularly believed.

“When reports like these come out they tend to cast doubt on the credibility of the IDF spokesman’s office,” said one senior foreign correspondent who asked to remain anonymous.

“I think that the IDF is highly credible,” said British journalist David Patrikarakos, who featured the army spokespersons’ unit in his bestselling book “War in 140 Characters.” However, he cautioned, while the army “is probably the best brand in Israel, internationally, in large parts of the world it is extremely tainted.”

NGOs like B’Tselem wield significant influence in how the the outside world views the Israeli military, which it sees as as less than honest in admitting its failures.

“When human rights violations are exposed, the IDF spokesperson tends to immediately respond without substantiating claims and with no thorough research,” B’Tselem spokesman Amit Gilutz told JTA. “Thus, time and again it changes its unfounded versions, after being caught sending the media unreliable information. All this is predictable, as the spokesperson operates like a de facto PR agency for the military. What is surprising is how readily the media still publishes the military’s claims with no reservation despite such claims proven wrong, misleading or inaccurate time and time again.”

“Israeli reporters trust in the political echelon and high-ranking IDF officers were absolute over the years,” Elbaz told JTA, accusing the local media of ignoring “essential and important questions such as whether the army is prepared for war or whether the home front is sufficiently well-protected from missile attacks.”

However, journalists like the Times of Israel’s Military Correspondent Judah Ari Gross say they aren’t so gullible or deferential.

Gross says he never forgets that the IDF sees its spokespersons’ unit as a military unit and that it “is used as such by the military in order to shape public opinion.”

“As a journalist and citizen, I think the army should be as open and transparent as possible [but] I do recognize it is a military unit that is part of the state and will therefore work toward the interests of the state,” said Gross.

In an interview, retired IDF spokesman Lt. Col. Peter Lerner said that his primary consideration was always the unit’s credibility and that he was “focused on the ability to deliver real information in real time.” The unit’s Achilles’ heel, he explained, was the need to get “confirmed and verified information” out in real-time and that he “never received instructions to be untruthful.”

Given that the IDF spokesman is dependent on information from commanders in the field, occasionally his office would put out incorrect information, he said. Lerner recalled an incident in which border police shot two Palestinians and the after-action report stated that they had only used rubber bullets, leading to an incorrect initial statement.

However, he insisted, such incidents are “rare” and constitute the “exception that proves the rule. I think generally the clarification of what happens on the ground is very accurate.”

Asked if the IDF ever sees misinformation as justified as a security tactic, current spokesman Lt. Col. Jonathan Conricus said that his unit “does not conduct psy-ops, information operations or anything else which is not pure public affairs.” Conricus said that “the only constraint that we have is the constraints of operational security which does not always allow us to share all of the information all of the time.”

Asked about the incident in Tulkarem, he replied that the IDF only releases information “that we are convinced is truthful and correct at the time of its release.” Conricus acknowledged that the first statement on the shooting was not an accurate representation of events.

“It appeared afterwards to have been incomplete and for those who asked we added the information and said that the IDF is investigating the incident,” he explained. “As soon as we have information we prepare it for dissemination and in the case of Tulkarem, the first time it was released and once journalists asked again we looked into the matter further and provided more information.”

His office did not have any information indicating that its first statement was incorrect prior to being informed of B’Tselem’s video, he added: “Of course not.”

Turning to B’Tselem’s assertion that the IDF was selectively releasing videos, Conricus said any claims that the IDF was engaged in deliberate misinformation were “totally baseless and false, categorically.”

However, say critics, regardless of the level of credibility of the army, local journalists have to learn to question more.

“The willing desertion of balanced and neutral journalism standards stands out in times of emergency and threats to national security,” said Elbaz. “Journalists prefer to stick to the national identity and the patriotic emotion and to blur their attachment to the profession of journalism.”