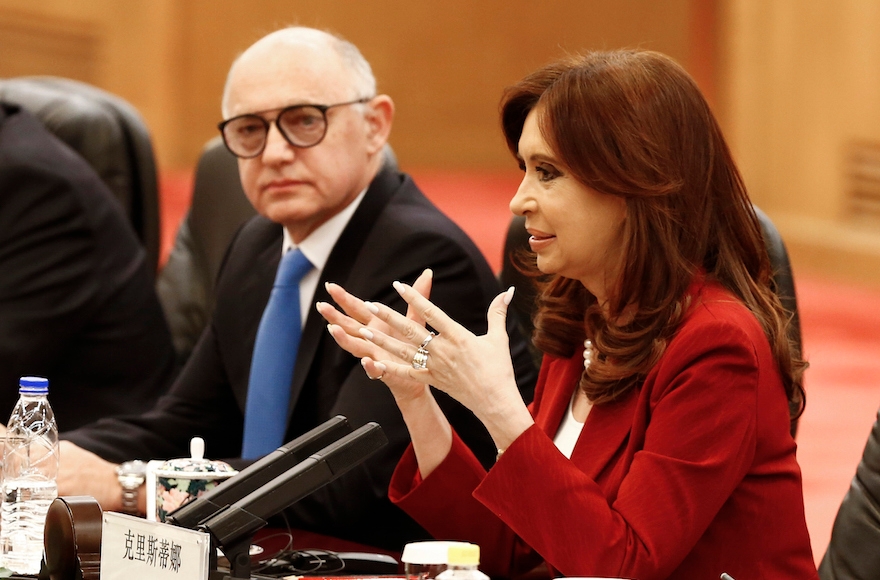 BUENOS AIRES, Argentina (JTA) — An Argentine news outlet’s analysis of secret recordings about the bombing of the 1994 AMIA Jewish center in Buenos Aires beat out The Wall Street Journal and others to win an international journalism award.

La Nacion, a daily, won the international Online Journalism Award from the Online News Association for excellence in audio digital storytelling for medium and large newsrooms.

Its “Prosecutor Nisman Phone Interceptions Mapped in Playlists” was developed through its data journalism website La Nacion Data and also was picked over The Guardian, KPCC public radio in Southern California and the Texas Tribune.

La Nacion Data Argentina analyzed 40,354 audio recordings that included information on which special prosecutor Alberto Nisman based his allegations that the government of former President Cristina de Kirchner cooperated with Iran to cover up the Islamic Republic’s role in the July 18, 1994, bombing of the Jewish center that killed 85.

The project included a two-year crowdsourcing effort to listen to 40,354 phone interceptions of the 986 hours of audio used by Nisman as the main evidence in his investigation; creation of a database with the 200 most important and relevant audios; and publication of those recordings in an interactive visualization tool.

The analysis conducted by 120 volunteers uncovered several pieces of information that had not been previously disclosed.

Nisman was found dead on Jan. 18, 2015, hours before he was to present his allegations concerning the Argentina-Iran agreement about the AMIA bombing. His allegations named the government of Kirchner as part of the cover-up of Iran’s role.

Whether Nisman’s shooting in his apartment was murder or self-inflicted has yet to be determined. Even though there is not a judiciary sentence yet, the current investigation is based on the hypothesis that the death of Nisman was murder, not suicide.

The OJA prize was announced Sunday at the Online News Association Conference and Awards in Austin, Texas. Launched in 2000, the OJAs are a comprehensive set of journalism prizes honoring excellence in digital journalism around the world.