An unopened letter never made it Anne Frank’s hiding place. Now it’s up for auction. 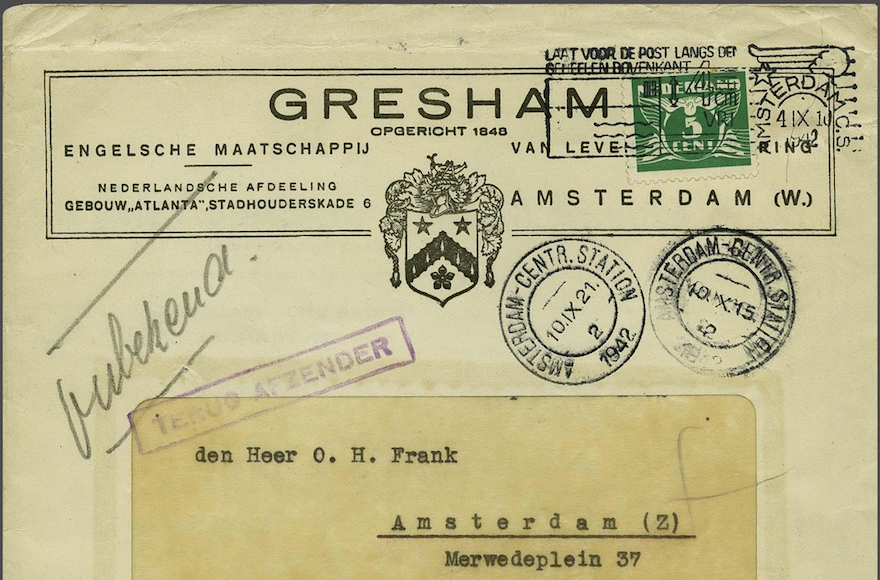 An unopened letter to Anne Frank’s father from an insurance firm is up for auction in Amsterdam. (Corinphila Auction House)

AMSTERDAM (JTA) — An auctioning house is selling an unopened letter that was mailed to the home of Anne Frank while she and her family were hiding elsewhere from the Nazis.

Bidding on the envelope, which came from an insurance company in 1942, will begin at $570 during the auction, which is scheduled to take place on Sept. 21 at the Corinphila Auction House in Amstelveen south of Amsterdam.

The letter is of “paramount importance, a testament to the most difficult period in the life of the Frank family, their underground existence,” the auction house wrote in a statement.

The envelope carries a red “return to sender” stamp and is addressed to Otto Frank, the teenage diarist’s father and the only member of her nuclear family who survived the Holocaust.

When it was sent to the family’s home in Merwede Square in Amsterdam’s south, the Franks were already in hiding in what is now called the Anne Frank House in the Dutch capital’s west. They hid there for over two years, until they were discovered and sent to concentration and death camps.

Anne Frank, who was 13 when she went into hiding with her family, wrote journals during her time there. Her father later edited them into a book titled “The Diary of a Young Girl.” Published in 1947, it became a bestseller and turned Anne Frank into a symbol of persecution and one of the world’s best-known Holocaust victims.

The unopened letter, which presumably never reached Otto Frank — he died in 1980 — was found along with other the belonging of stamp collector Stefan Drukker following his death in 2013, the Trouw daily reported Wednesday. The envelope containing the weighty letter carries the logo of the British life insurance agency Gresham.

Nathan Bouscher, the auction house’s director, told Trouw that the envelope was found in a room containing other old envelopes that Drukker had collected for the stamps on them. Bouscher does not know what the sealed envelope contains, despite his attempts to hold it against a bright light to see what’s inside. He could make out typed text.

The post An unopened letter never made it Anne Frank’s hiding place. Now it’s up for auction. appeared first on Jewish Telegraphic Agency.