(JTA) — In many ways, Chavie and Chaim Bruk are the archetype of Chabad emissaries. The couple live in Montana, one of only a handful of observant Jewish families in the state. Pre-pandemic, they used to welcome as many as 50 Jews of all backgrounds into their Bozeman home for Shabbat dinners featuring a three-course, home-cooked meal, loud singing and deep discussions about spirituality. And like many Chabad families, their house is full of children — they have five ranging in age from 3 to 16.

The story of how they built their family isn’t as typical.

Like many Orthodox Jews, the Bruks were set on following the biblical command that urges Jews to “be fruitful and multiply” and hoped for a large family after they married in 2006. That changed two years later when a doctor delivered devastating news: They would not be able to have biological children.

The news, delivered at a New York City fertility clinic during one of the couple’s trips from Montana, “flipped our whole life on its head,” recalled Chavie, 36. “Here you are thinking that you know what you want and what your life is going to look like … and all those things were kind of taken away from us.”

Determined to build a family however possible, they started exploring adoption. They were mostly unfamiliar with the experience.

“In the religious world we did not know anybody who had adopted. It was very, very unusual. It wasn’t talked about,” Chavie said.

The pair blazed a new path. Just a year after their diagnosis, the Bruks adopted their first daughter — a 2-month-old girl from Russia whom they named Chaya. In the following decade, they adopted four more times.

With each child, the couple grew the number of Orthodox Jews in Montana, where they had moved in 2007, a year after getting married. The state is home to a handful synagogues but little of the infrastructure that underpins observant Jewish life. So the Bruks order large amounts of kosher meat several times a year and store it in the seven freezers at their home. Their children attend public and secular private schools — there are no Jewish schools in the state.

The couple used to travel seven hours back and forth to be able to use a mikvah in Utah, the ritual bath that observant women immerse in monthly following their periods, but eventually built one in Bozeman that is used by Jews from neighboring states.

Since the Bruks arrived, two more Chabad couples — including Chavie’s sister and her husband — have settled in Montana, in different cities. Overall, they estimate that there are some 5,000 households with at least one Jewish person across the sparsely populated state and they can reach some 2,000 of them every year.

But the Bruks’ impact extends far beyond the state’s borders. As they have grown their family, they also have become forceful advocates for adoption in the Orthodox world. Through writing about their experience online and on social media, and giving interviews to observant Jewish outlets, the Bruks have fashioned themselves as ambassadors for other Orthodox Jews looking into adoption. Every month they get multiple calls from others in a similar position.

“My goal is when I talk about it publicly is to first of all help people feel less alone,” Chavie Bruk said. “I think before no one even knew it was an option, it wasn’t even on the table, and thank God, through our journey and through speaking publicly about it we have facilitated many other families through an adoption process, and we have a lot of joy and pride in that.” 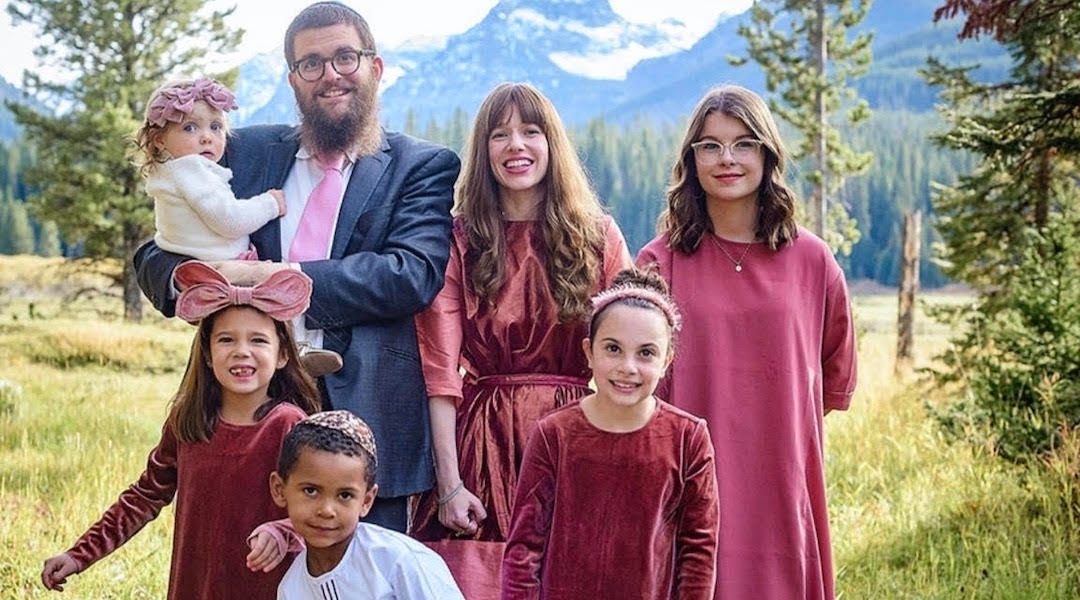 The Bruks are among the handful of Orthodox Jewish families in Montana. (Courtesy of the Bruk family)

The observant Jewish community places a huge value on large families as a means of promoting Jewish continuity, and couples who face challenges building a family can feel left out or alienated.

“As Jewish communities become more traditional, your main street cred is the number of biological kids you have,” said Shmuly Yanklowitz, an Orthodox rabbi in Arizona who founded an organization that advocates for fostering and adoption in the Jewish community. “It’s built into the culture to give people a blessing to have many children … There is a lot of pressure.”

Through Yatom, Yanklowitz runs educational programs and provides small grants to families such as the Bruks to encourage them to foster and adopt children. Yanklowitz has fostered eight children with his wife and, through his organization, worked with 29 family units to pursue fostering and adoption.

The Bruks see themselves as countering the notion that infertility is something to be embarrassed about because there are still pathways to creating large families.

“What Chavie and I are doing in our own way is not only adopting children but sharing with the world the incredible journey that it is, so that other couples know that there’s nothing to be ashamed of,” said Chaim, 38. “It’s not a badge of shame to be an adoptive parent, it’s actually a badge of honor. It’s an honor to be able to take wonderful children who accept us as their parents and we accept them as our beloved children.”

Less than a year after they adopted Chaya, the couple traveled to New Jersey to meet their second daughter, Zeesy, who was a baby when they met her for the first time at a car rental agency at Newark’s airport. Then came Menny, a boy they adopted as a baby; Shoshana, whom they took in as a 12-year-old; and Chana Laya, adopted as a baby in 2017.

With each child’s unique story comes a set of challenges — whether dealing with physical illness or childhood trauma. Shoshana, now 16, has struggled with self-harm and an eating disorder as a result of childhood trauma — experiences that she recently detailed on her mother’s blog. She has tried to kill herself.

“I grew up believing G-d gave me a cursed life and that I was unloved. Until I was blessed with my family,” Shoshana wrote in the blog post, where she described the treatment programs she had participated in while living with the Bruks.

Adopting children has also meant having to grapple with new issues relating to identity. Menny, now 7, is Black, and Chaim remembers some initial worries.

“I was concerned about the reality of a kid growing up as an Orthodox Jewish boy that happens to be Black coming from Montana and how that integration would work in the broader Orthodox community,” he said.

Menny rarely comes across other Jews of color in Bozeman, which is 92.4% white; less than 1% of residents are Black. But the family makes an effort to expose him to books featuring diverse characters and music by artists such as Nissim Black, an African-American Orthodox rapper whose songs Menny has learned by heart.

Though the Bruks had to deviate from their expected path to building a family, they say they wouldn’t have it any other way. Chavie has come to believe that she didn’t have biological children because adoption “was the path that I was supposed to take.”

“And being that I grew up in an observant, religious Chabad background, if I had biological children, adoption would never have crossed my mind — not because I’m against it or because I don’t think it’s beautiful,” she said, “but because it wasn’t on my radar.”