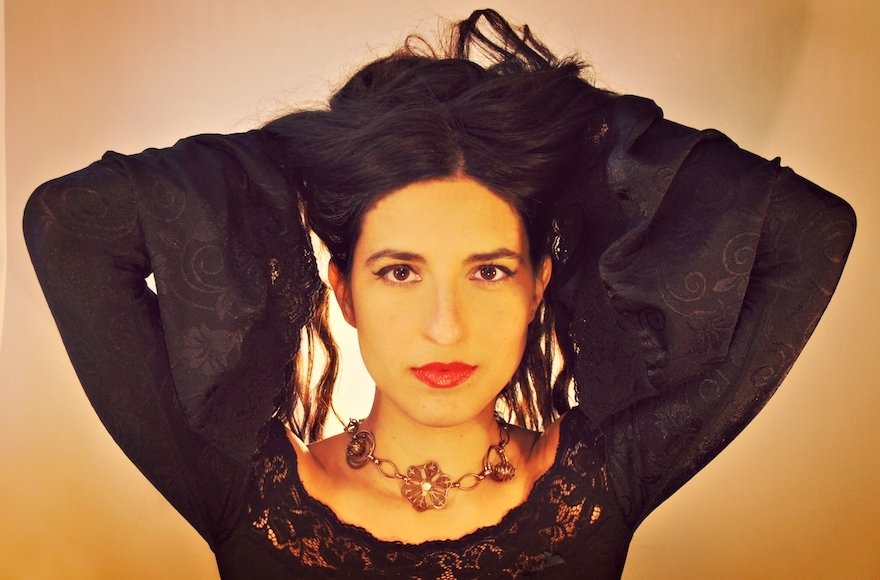 AMSTERDAM (JTA) — Wandering the ornate streets of the city of Fes in northern Morocco, Noam Vazana heard several men singing a tune so familiar that it made her stop in her tracks.

Vazana, a successful 35-year-old Israeli musician living here, was visiting her ancestors’ country of birth for a performance at the Tanjazz festival in Tangier when she heard the tune. She began following the men through alleyways to a square where hundreds of locals were singing that same Arabic-language song at a street party.

She could neither recognize nor understand the lyrics, but the melody was woven into some of her earliest childhood memories: It featured in a song that Vazana’s late grandmother used to sing to her regularly in Israel in Ladino, the dying Jewish-Sephardic language.

For Vazana, the experience was the start of a journey to study her roots and grandmother’s language and culture.

It also was the trigger for the creation this year by Vazana of what several experts in the field say will be the first album in many years entirely comprising newly written or newly composed Ladino songs for adults.

The new album, which has yet to be recorded in full, is coming out under Vazana’s stage name, Nani — her grandmother’s nickname for her.

“Ladino was something of a forbidden language at our home,” Vazana said. To her father, a Fes native, it represented the opposite of fitting into Israeli society, she explained.

But hearing the melody in the Moroccan city reminded Vazana of how her grandmother would sing to her in Ladino anyway, including “one time that she and I were peeling beans in the kitchen,” the singer recalled.

The Ladino album is part of a growing musical scene that came into its own about 20 years ago thanks to young Sephardic artists, many of them from Israel, who like Vazana reconnected with their roots through music.

Notable artists from that scene include performer-composers like Yasmin Levi, daughter of the late researcher of Sephardic culture Yitzhak Isaac Levy, and Mor Karbasi. Both deploy their powerful voices to showcase the operatic melodrama typical of many traditional Ladino numbers.

Preserving Ladino music in all of its authentic glory is a difficult task — and many believe an important one — because of the relative paucity of historical recordings.

After the Holocaust and the creation of the State of Israel, the vast majority of the Jews of the Mediterranean basin left for Israel and beyond. The exodus meant that Ladino went from being a living, breathing language spoken by half a million people to a dying dialect spoken mostly by a graying population of immigrants in Israel and a minority of Turkey’s 15,000 Jews.

Vazana said that she cares about preserving Ladino. She is currently giving a European tour of traditional Ladino songs with a modern twist, titled “Andalusian Brew” — the same title as her upcoming album, which will contain only newly composed numbers. 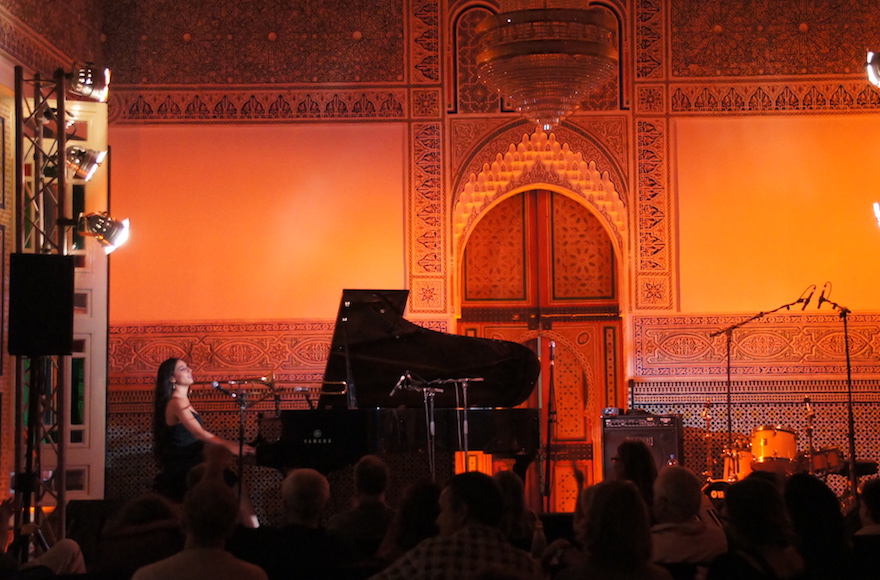 But her take is anything but ethnographic.

Instead of trying to re-create Ladino music authentically, in the new album she attempts to adapt it to modern times, leaving listeners to imagine a world where Ladino and its music were allowed to evolve like other Spanish and Portuguese variants such as Canarian Spanish, Creole or Galician. Radio stations where these dialects are spoken often play compositions that combine ancient and contemporary elements.

The themes treated in the new tour and album reflect even more poignantly Vazana’s attempt at modernizing Ladino music. One track is a passionate but humoristic tribute to the virtues of the eggplant, complete with cooking tips. But other songs are more risqué. One gives voice to a transgender woman who becomes a man to make her son-less father proud; another adapts the allegedly homoerotic poetry of the 11th-century philosopher Shmuel Hanagid.

A former trombone player and member of the Israel Air Force and Israel Defense Forces orchestras, Vazana shows off her skills as a musician as well as a singer in the “Andalusian Brew” show. With her powerful voice and confidence playing the piano, parts of the concert feel like an unlikely fusion between the music of pop innovator Vanessa Carlton and one of the great Ladino divas of the 20th century, Rosa Ashkenazi.

One of her songs, “A Second Skin” (“Una Segunda Piel),” which will be on the new album, concerns an ancient Sephardic custom called “La Mortaja” in which middle-aged people were wrapped in shrouds and given a mock funeral – often after becoming grandparents or retiring.

“It looks very macabre at first, but actually the ceremony is not about death at all but about rebirth,” Vazana said. “You come to grips with your mortality, but at the same time you shed the shroud and symbolically your troubles away with it and begin a new phase in life.”

In preparing the tour and album, Vazana studied Ladino culture and poetry with Jonathan Benavides, the chairman of the Jewish community of the Dutch city of Leiden. Benavides is also among a handful of Ladino language teachers in the Netherlands, whose centuries-old Portuguese Jewish community used to be one of the world’s greatest Sephardic diasporas.

“To my knowledge, so far there have been no Ladino music albums made up of with newly written songs and melodies,” Benavides told JTA. “There have been recently terrific albums with traditional Ladino works.”

Devin Naar, a professor of Sephardic studies at the University of Washington, told JTA that when it comes to newly written music albums in Ladino, he is aware only of two featuring children’s songs: the 2016 “Ora de Despertar” by Sarah Aroeste and another compilation released recently in Israel  titled “Yeladino.” 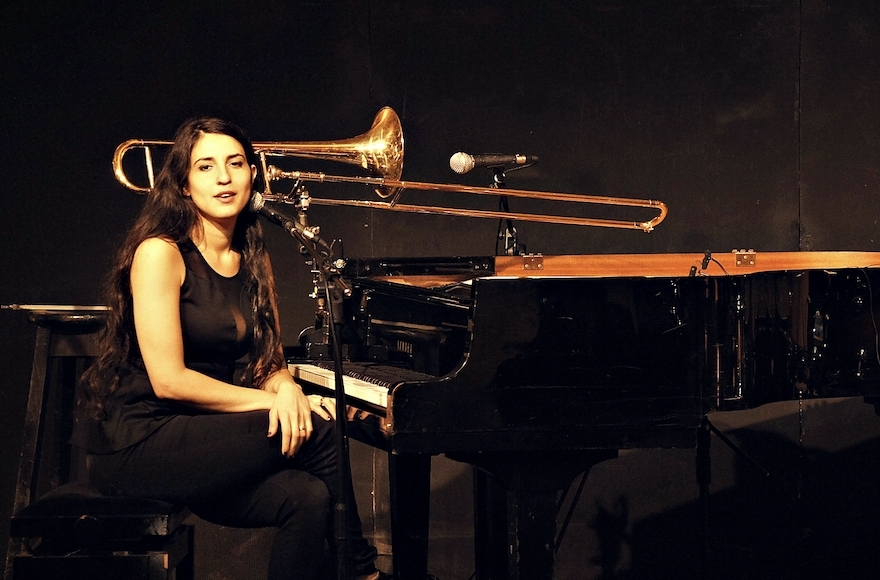 Benavides has not seen Vazana’s tour, but said he is not sure about some of her interpretations of the sources she studied under his instruction – including the allegedly homoerotic Hanagid poem.

“It is true that homoerotic [poetry] was written in 12th-century Spain by some poets,” Benavides said. “But I’m not sure you can say that Shmuel Hanagid did that.”

More broadly, though, Benavides said he has limited faith in any project that explores Ladino in a secular context, as Vazana appears to be doing.

“It’s not that Ladino is a religious language. It’s not,” he said. “But it was part of a world, of a community, defined by the Jewish religion. And when you examine it outside of that context, well, you’re looking at half the story.”