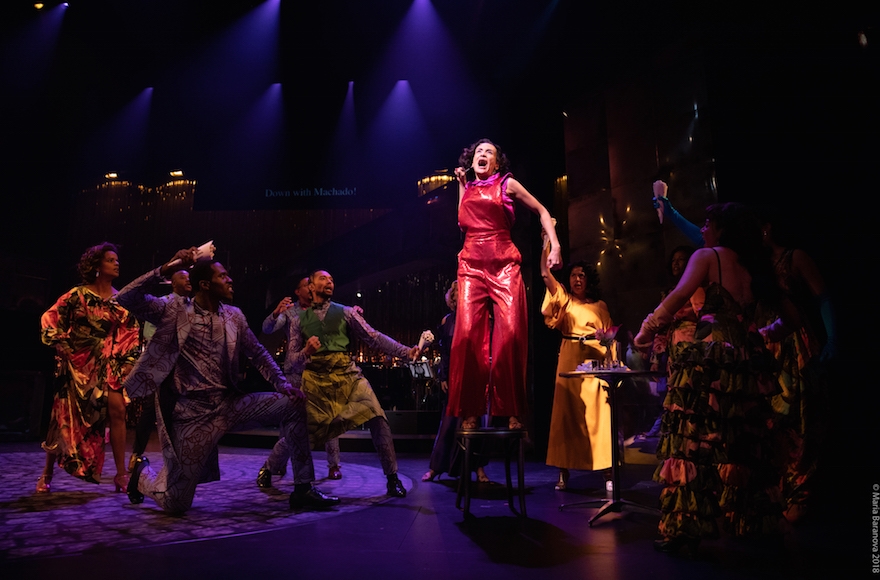 NEW YORK (JTA) — “Hatuey: Memory of Fire” flashes alternately among three unlikely settings and languages. The chamber opera is set in a nightclub in Havana in 1931, a Cuban battlefield where indigenous people fight Spanish conquistadors in 1511 and Ukraine in the early 20th century, where Jews face violent pogroms.

The settings may seem incongruous enough, but they are connected by perhaps an even more surprising piece of writing: an epic Yiddish poem about an indigenous chief who has been called “Cuba’s first national hero.”

The opera, with music by Grammy Award-winning klezmer musician Frank London and libretto by Elise Thoron, is having its U.S. premiere at Montclair State University as part of the suburban New Jersey school’s Peak Performances series. It draws inspiration from the life of Asher Penn, a Ukrainian Jewish refugee who arrived to Cuba in 1924 and later founded the country’s first Yiddish newspaper.

In Cuba, Penn learned about the story of Hatuey (prounced ha-too-WAY), an indigenous chief who led Cuba’s Taino people in an uprising against Spanish colonial forces in the 16th century.

He was so taken by Hatuey’s heroism and execution at the hands of the Spanish — and the way it resonated with his own experience of pogroms in his native Ukraine — that he composed a 125-page poem about him in 1931. The catch: Penn wrote the poem in Yiddish. 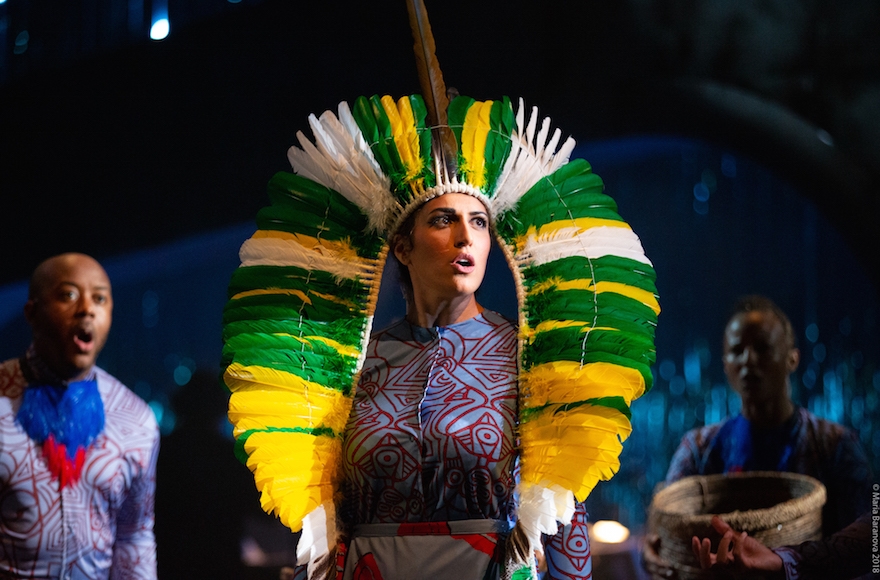 Nicolette Mavroleon appears in “Hatuey: Memory of Fire,” a chamber opera about a Yiddish poet and his obsession with an indigenous Cuban freedom fighter. (Maria Baranova)

London and Thoron’s production, which is playing at Montclair State’s Alexander Kasser Theater through Sept. 23, stays true to Penn’s writing by including excerpts of the poem in the mamaloshen. The Taino characters sing in Yiddish, which could have turned out as a joke from a Mel Brooks movie but instead eerily connects one persecuted “tribe” to another. Other parts are performed in English and Spanish with supertitles.

London, a founder of the Klezmatics and other klezmer supergroups, learned about Penn and Hatuey through his friend, the theater director Michael Posnick, who is Penn’s son-in-law (the Penn family later moved to the United States). Posnick serves as co-producer of the opera.

In a phone interview with JTA, London said that he initially wanted to adapt the poem itself into an opera. But after he teamed  with Thoron, his previous collaborator on a work about Marc Chagall and the Soviet Yiddish Theater, the pair decided to interweave the story of the poet and his poem’s hero.

“Once we had the idea to incorporate the story of poet in our theater piece, that’s where it got both very rich, very complicated, very multilayered and trilingual, but a lot of fun because that opened the door also for us to include the Afro-Cuban music,” he said.

London, who lives in New York, has performed Afro-Cuban music almost as consistently as klezmer in a career that spans some 500 CDs.

Though the pair concocted the fictionalized nightclub setting — and a romance between Penn and the singer to whom he tells the story — the rest of the opera is based on the true stories of Penn and Hatuey, London said. 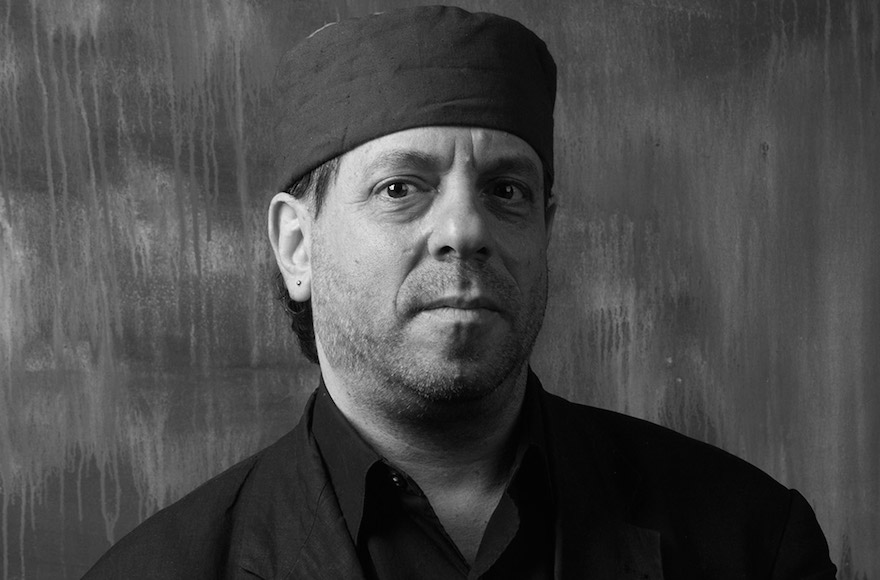 Frank London, a Grammy Award-winning trumpeter, is the composer of “Hatuey: Memory of Fire.” (Anya Roz)

Even though he was enthusiastic about combining the various narratives and languages, London said it wasn’t necessarily an easy fit.

“It took us a long time to figure out how this piece was going to work,” he said.

The diverse cast of 16, none of whom knew Yiddish previously, learned the entire libretto in the span of two weeks. London said it helped that they are all opera singers and thus used to performing in foreign languages.

“It’s hard to act in a language you don’t know,” he said, “but opera singers are trained to learn how to sing in languages they don’t know — that’s what they do.”

The production also received assistance from the National Yiddish Theatre Folksbiene, which helped with translation and transliteration into Yiddish.

Writing an opera in Yiddish had been a longtime goal for London, but he struggled with finding a story that fit.

“I didn’t just want to take a beautiful Sholem Aleichem shtetl story in Yiddish and make a klezmer-shtetl opera,” he said, referring to the famed Yiddish author and playwright. “I really wanted this to have a more universal message and not be a nostalgic piece.”

As a member of the Klezmatics, London has long blended Yiddish musical traditions with contemporary music. For “Hatuey,” he wanted to do something in a similar vein.

“The Klezmatics’ entire career was based on the same premise but within music: to create a vital, living Yiddish klezmer music that is directly connected to our roots and history and to its history, but that is perfectly alive in our world,” he said.

Last year, London staged the opera in Cuba, but he had to make modifications to accommodate the production company’s limitations. The Yiddish parts were performed in Spanish, and London altered the music so it could be played by a band rather than a full orchestra. The New Jersey production represents the opera’s first run as it was written.

London said that putting on a new opera helps bring Yididsh theater back to its roots.

“Yiddish theater 80-100 years ago was cutting edge, avant-garde zeitgeist theater,” he said. “We’ve gotten back to that.”

The post An Afro-Cuban-Yiddish opera tells the story of a Jewish refugee appeared first on Jewish Telegraphic Agency.