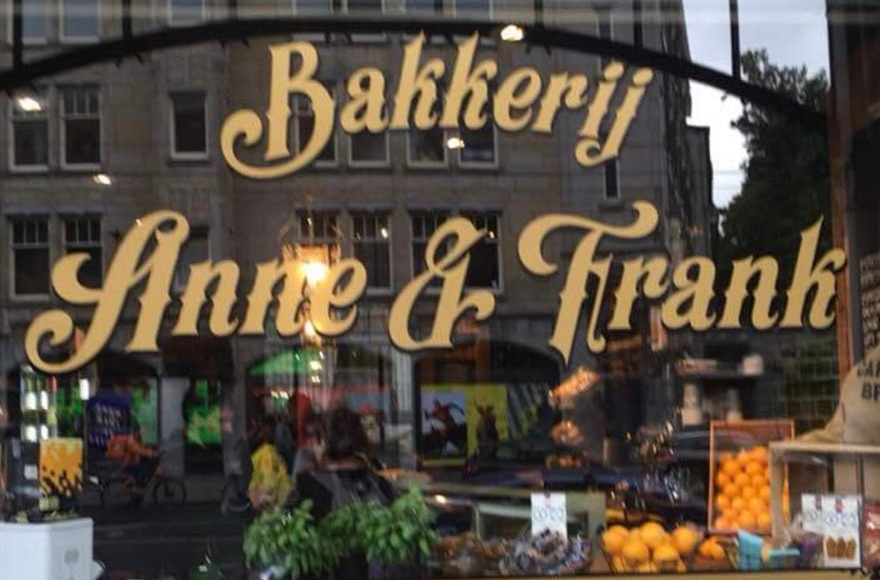 AMSTERDAM (JTA) — A bakery that was recently opened in the Dutch capital under the name “Anne & Frank” will change its name following widespread online criticism.

The bakery, which opened earlier this month not far from the former hiding place of Holocaust victim Anne Frank and her family, received thousands of angry comments on Twitter and other social networks, where it had tried to establish a presence for promotional reasons, the De Stentor daily reported Monday.

Many commenters found it tasteless of the owners to reference Anne Frank in the bakery’s name, which was written in an antiquated font on the bakery’s display window, De Stentor reported.

Owner Roberto Barsoum removed from the sign all the words except bakery. He has said he will change the bakery’s official name with the chamber of commerce.

Barsoum told Het Parool daily that he feared a backlash when his partner suggested the name, but that he later found it too attractive to pass up.

“I was afraid the name would cause anger, that people would think I was trying to exploit the name for commercial purposes,” he said. But later he reckoned that “it’s a good name, a sign of protest. I don’t think it’s an abuse personally of the Anne frank name. And it’s such a small shop, it’s not like it will make anyone a millionaire.”

Some tourists told De Stentor that they felt uncomfortable at the bakery, including the Vulduraro family from Italy. But Aly Shawer, a tourist from the United States, told the paper she found it “fitting” because of its location.

Anne Frank, her sister, mother and father went into hiding from the Nazis in 1942 and hid with several other Jews at Prinsengracht 263 in Amsterdam for two years before they were caught and sent to death and concentration camps. From Anne Frank’s family, only her father, Otto, survived the Holocaust. He edited diaries that Anne had written in hiding and published in 1947 “The Diary of a Young Girl.”

It became an international bestseller, making Anne Frank one of the world’s best-known Holocaust victims and an icon for the victims of racist oppression.

More than a million people visit her former hiding place each year, making it one of the most popular museum in the Netherlands.