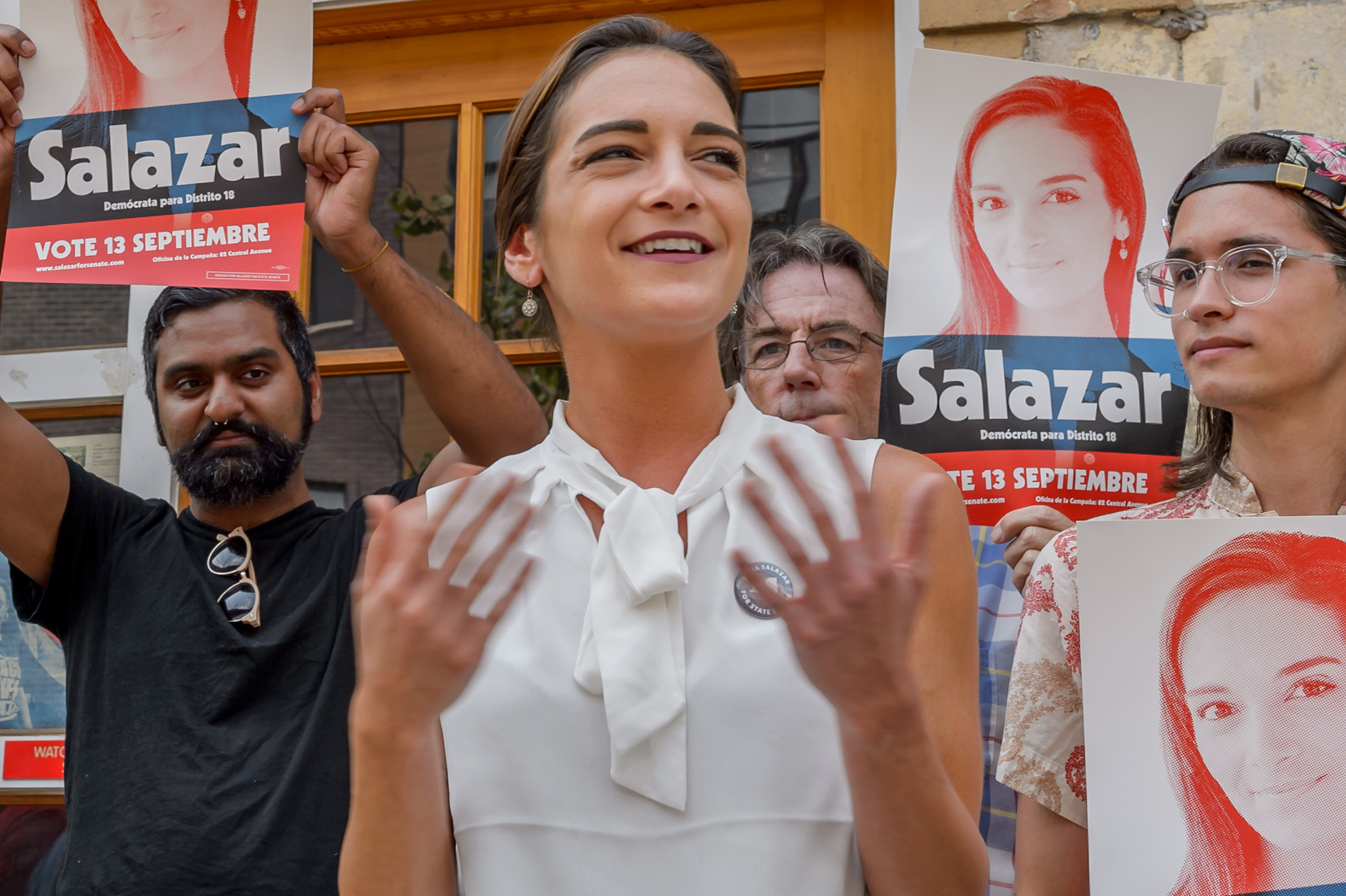 NEW YORK (JTA) — New York State Senate candidate Julia Salazar is pushing back against an article on a Jewish website describing discrepancies in her Jewish and family biography.

Salazar, 27, a democratic socialist running for a seat in Brooklyn’s 18th district, has been profiled in various Jewish and general media, including JTA, which note that she is Jewish and Colombian American.

An article that appeared Thursday in Tablet, an online Jewish magazine, said Salazar has been inconsistent in describing her place of birth and Jewish background, and that her Jewish and “immigrant” identity is “largely self-created.”

The Tablet article, by Armin Rosen, does not challenge Salazar’s right to describe herself as Jewish, although it does say that she appeared to identify as a conservative Christian in her first years as an undergraduate at Columbia University.

Salazar’s brother, Alex, told Tablet, however: “There was nobody in our immediate family who was Jewish … my father was not Jewish, we were not raised Jewish.”

In a JTA story this week published before the Tablet article appeared, Salazar said she was raised in a “secular and mixed family, Catholic and Jewish,” and that she was previously aware of her “Sephardi surname.”

Contacted by JTA on Friday, after the Tablet article appeared, she gave a similar account of her upbringing.

“My parents weren’t religious when my brother and I were growing up,” Salazar wrote over Facebook Messenger. “Some of my extended family are Jewish; many are Catholic. Others converted from Judaism to Catholicism. My dad didn’t identify as Jewish (or any other religion, although his funeral was in a Catholic church).”

Citing this “extended [Jewish] family,” Salazar told JTA,”I converted, but my engagement with Judaism came from learning about my family background. ”

Pressed on the details of her conversion, Salazar said, “I went through a conversion process with a Reform rabbi at [Columbia-Barnard] Hillel in 2012.” She also said, “I don’t really bother to consider it a conversion because many people don’t respect Reform conversion.

“I essentially took a course and learned how to read Torah and had the option of going through a b’nai mitzvah ceremony (along with two other women who studied with me) but declined to do it,” she told JTA. “I didn’t want to make a big deal about it. It also didn’t feel earnest to consider it a conversion because there was no religion for me to convert from. I know that might seem simplistic but it’s true and even halakhic.”

Halachah, or Jewish law, however, considers someone Jewish if their mother was Jewish, if they converted under rabbinical authority or, in the Reform movement, if their only Jewish parent was their father. Rabbis and synagogues have become increasingly welcome to those who express a bond with the Jewish people — especially the non-Jewish spouses of Jews — but most also would encourage conversion. That often includes an extended course of study and a ritual that includes an immersion in a ritual bath, or mikvah.

“Simplistic isn’t what I mean,” Salazar clarified. “Maybe pedantic? Anyway, I felt Jewish, I was committed to Judaism and remain committed to Judaism, and I’ve never demanded that anyone else accept my Judaism nor have I sought to somehow use it to my benefit. From a political or like utilitarian perspective, if I were politically motivated rather than spiritually motivated then I never would’ve identified with Judaism, I would’ve dismissed it just as my older brother did.

“But I am Jewish, there’s no way for me to become un-Jewish except by converting to some other religion which I never intend to do,” she said. “Even if the gatekeepers of Jewishness want to deny my Jewishness, that doesn’t really upset me.”

(Asked later to respond to Tablet’s reporting that she was once a practicing Christian, Salazar did not respond.)

“I’m not running for Chief Rabbi here; I’ve never sought to use my Jewishness for political gain, especially because frankly it is not politically advantageous for me at all.”

In an invitation to a recent fundraiser for Salazar held by The Jewish Vote, a new organization promoting political progressives, Salazar was described as “an immigrant, Jewish women [sic] of color, feminist, democratic socialist, and union member.” The Jewish Vote is an offshoot of Jews for Racial and Economic Justice, an organization where Salazar has worked as an organizer and a Grace Paley Fellow.

Speaking to JTA earlier this week, however, Salazar said she was born in Miami. She gave a similar account in an interview May 5 with Village Voice reporter Emma Whitford, who posted the transcript on Friday.

Some of the discrepancies may be attributed to a political neophyte who was unprepared for the media spotlight. Her campaign was given a boost by comparisons to Alexandria Ocasio-Cortez, another 20-something Latina and political newcomer who upset the Democratic incumbent in the party’s U.S. House of Representatives primary in June.

Her supporters have also blamed the media for misreporting her biography or lifting mistaken biographical details from other outlets.

But others insist that she is misleading voters for political gain. In posting the story to Twitter, Bari Weiss, a New York Times opinion editor and former Tablet editor, argued that Salazar “is running on her identity as a Colombian immigrant and a Jew of color. But it seems she is neither of those things.”

In the Forward, opinion editor Batya Ungar-Sargon wrote, “If Salazar had come out of the gate saying ‘I consider myself Jewish, though my parents are not’ or ‘I am a Jew by Choice’ or ‘I traveled back and forth to Colombia as a very young child so I consider myself an immigrant’ — a sentiment she tweeted in her defense — there would be no expose here.”

In the hours after the Tablet article appeared, Salazar denied any wrongdoing and expressed outrage over what she views as a “birther conspiracy theory” centered around details of her place of birth and Jewishness.

“I virtually never speak publicly about my religion unless media explicitly ask me about it,” Salazar tweeted of her Jewish identity. “And that’s largely because I don’t enjoy subjecting myself to Tablet-esque race science, as a person from a mixed background.”

Alana Newhouse, the editor of Tablet, denied that her site was acting as a Jewish “gatekeeper.”

“We have no test of, or opinions about, ‘who is or isn’t a Jew,’” she wrote in an email to JTA. “Indeed, much to the chagrin of our critics on the right, Tablet has always welcomed everyone into our Jewish tent — regardless of race, gender, sexual orientation, denominational affiliation or lack thereof, Jewish, Christian, Muslim, atheist, Wiccan, et al. Nor is this about a political test. When Alexandra Ocasio-Cortez was elected, we congratulated her — and we continue to wish her success.

“The point of Armin’s article,” she continued, “is that there are inconsistencies in multiple key components of the biography that Julia Salazar has publicly and repeatedly claimed for herself — and not just, or even most importantly, about her Jewish identity.

“Whether voters care about this pattern of falsehoods is up to them. It’s the job of journalists to hold accountable people with power — and those aspiring to power — especially those who claim to speak from, or for, our community. Attacking the press as traitorous for doing our job is dangerous Trumpian poison. There is something unreal and disconcerting about seeing politicians on the left discover its power — and feel unashamed to use it.”

Salazar also denied representing herself as an immigrant.

“My U.S.-born mother and Colombian-born father had two different kids and raised us between two different places,” Salazar posted on Twitter after the Tablet article came out. “I don’t present myself as an immigrant nor as a non-citizen.”

“This is the story of my life,” Sarsour wrote on Salazar’s post about the controversy. “Don’t spend any energy responding. The point is to take you off your game. Distract you from the real work. Keep moving forward.”