All the Jewish moments from Michael Cohen’s dramatic House testimony 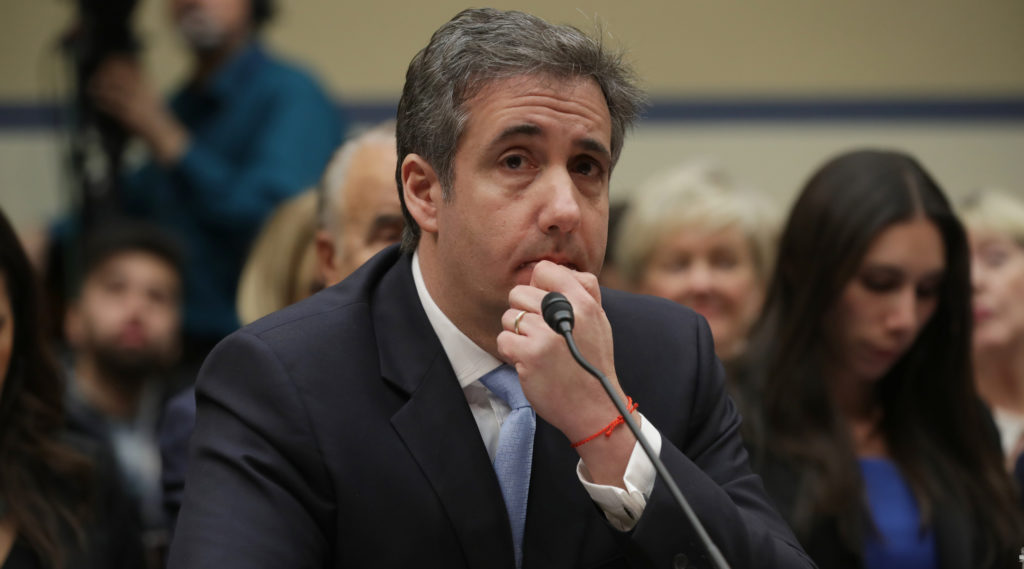 WASHINGTON (JTA) — It was hardly Michael Cohen’s first public appearance. Nor was it his first appearance before Congress.

His testimony on Wednesday to the U.S. House of Representatives Oversight Committee was, however, Cohen’s first extended public appearance implicating President Donald Trump in crimes that will send Cohen to prison for three years.

Gone was the signature toughness that once made Cohen notorious. (Remember when he was the “Says who” guy?) He was deferential and soft-spoken, at one point nearing a breakdown when he apologized to his family.

Cohen seemed resigned to starting his sentence in May for bank fraud, bypassing election laws during Trump’s campaign and lying to Congress about the extent of Trump’s foreign dealings.

Two of Trump’s most loyal lawmakers, Reps. Mark Meadows, R-N.C.. the committee’s ranking Republican, and Jim Jordan, R-Ohio, were the most aggressive in trying to further dent the credibility of the self-acknowledged liar.

It was Meadows who inadvertently brought about the day’s most Jewish moment when he challenged Cohen’s testimony — released at midnight before his 10 a.m. committee appearance — calling Trump a “racist,” “cheat” and “con man.”

Meadows demanded to know how Cohen could call Trump a racist when Cohen himself brought Lynne Patton, an African-American woman, into the Trump organization (Patton is now a political appointee at the Department of Housing and Urban Development).

“You made some demeaning comments about the president that Ms. Patton doesn’t agree with!” Meadows said. “In fact, it has to do with your claim of racism. She says that as a daughter of a man born in Birmingham, Alabama, that there was no way she should work for an individual who is racist — how do you reconcile the two of those …”

Cohen interrupted: “As neither should I as the son of a Holocaust survivor.”

Meadows was in a rare instance flattened, hemming and hawing before saying, “I’ve not heard one time a racist comment out of [Trump’s] mouth.”

It was a quiet moment subsumed by much of the news Cohen made: Among his allegations, he said that Trump authorized payments to Trump’s alleged mistresses in order to buy their silence; that Trump had advance knowledge of plans to release Democratic Party emails hacked by Russians; that there may still be criminal investigations into actions involving Trump; and that Trump was involved in planning a business deal with Russia until late in the campaign.

Answering Rep. Debbie Wasserman Schultz, D-Fla., whose political rise was short-circuited in part because of the email thefts, Cohen also implicated Trump’s Jewish daughter, Ivanka, saying she and her brother, Donald Jr., also were pursuing the Moscow deal well into the campaign.

In his prepared testimony, Cohen cited his father’s Holocaust survival as a reason for coming clean after a decade of loyalty to Trump, and also called the president a racist. Asked why he decided to cooperate, beyond the obvious reasons — the FBI raided his properties and found incriminating evidence being the major one — Cohen cited “Charlottesville.”

That was when Trump equivocated about condemning neo-Nazis and white supremacists whose march in the Virginia city ended in deadly violence in August 2017.

There were other subtle reminders of Cohen’s Jewishness, like when he was asked by a friendly Democrat about Trump’s recent insinuation that Cohen’s father-in-law was a criminal.

“He came to this country in 1973, [with] the expulsion of Jews from the Ukraine,” Cohen said of his father-in-law. “Never in my life did I think Mr. Trump would do something so disgraceful.”

And some on Twitter wanted to know what Rep. Chip Roy, R-Texas, meant when contrasted Cohen’s past support for Trump, which Roy said was self-serving, with those of “real Americans” who backed Trump because they wanted change.

Wisely, most of the Republican attacks on Cohen focused on how he was a confessed and convicted liar, but even that left an opening for Trump’s opponents. Rep. Jamie Raskin, D-Md., opened his five minutes with Cohen by saying, “Our [Republican] colleagues are not upset because you lied for the president. Our colleagues are upset because you stopped lying for the president.”

Trump, attending the summit with North Korea’s Kim Jong Un in Vietnam, did not comment on Cohen’s testimony except to retweet his own tweet from the evening before: “Michael Cohen was one of many lawyers who represented me (unfortunately). He had other clients also. He was just disbarred by the State Supreme Court for lying & fraud. He did bad things unrelated to Trump. He is lying in order to reduce his prison time. Using Crooked’s lawyer!”

The last reference was apparently to attorney Lanny Davis, who represented President Bill Clinton during his multiple scandals in the 1990s and is close to Hillary Clinton. Davis, a Jewish communications professional who once served as a spokesman for The Israel Project, sat directly behind Cohen during the hearing.