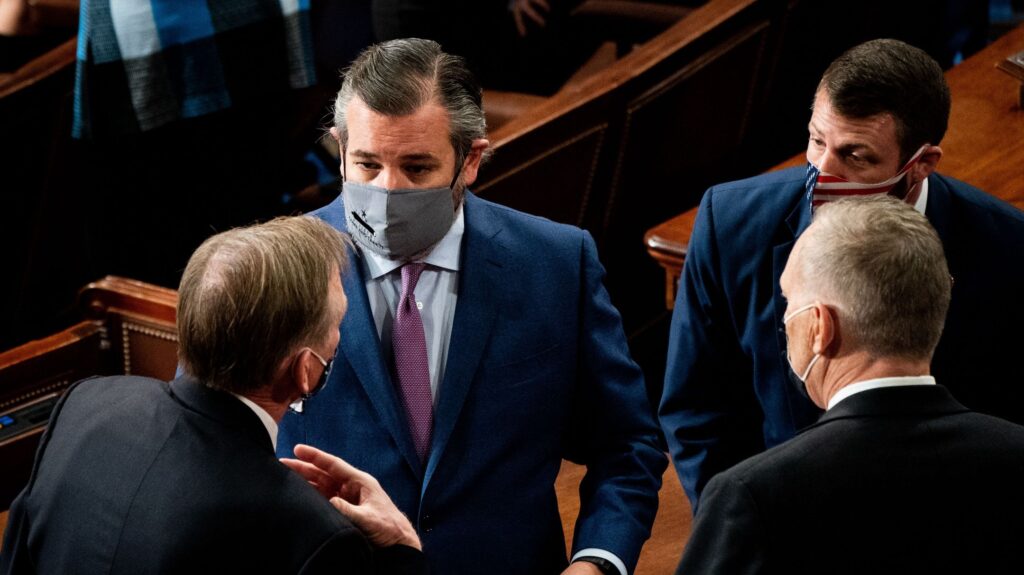 (JTA) — Ted Cruz and Alexandria Ocasio-Cortez engaged in a Twitter beef about the use and misuse of Holocaust analogies.

The weekend’s exchange between the Republican senator from Texas and the Democratic New York congresswoman reflects a disagreement even among Jews — and how liberals and conservatives perceived the dangers posed by anti-Semitism.

It started Friday when President-elect Joe Biden was asked how he regarded attempts by Cruz and Missouri Republican Sen. Josh Hawley to overturn Biden’s victory. The two voted Thursday to challenge the election results, despite a violent assault the afternoon earlier on the Capitol by a mob invoking President Donald Trump’s false claims of voter fraud in the 2020 election.

“They’re part of the big lie,” Biden said. “Goebbels and the great lie. You keep repeating the lie, repeating the lie.” (Goebbels used the expression in reference to tactics he attributed to the Nazis’ British enemies, but it has come to be identified with his own propagandistic strategies. It has been invoked by politicians on both sides of the aisle to decry propaganda on the other side.)

Hawley and Cruz immediately condemned Biden for calling them Nazis.

“Really sad,” Cruz said on Twitter. “At a time of deep national division, President-elect Biden’s choice to call his political opponents literal Nazis does nothing to bring us together or promote healing. This kind of vicious partisan rhetoric only tears our country apart.”

While Biden appeared only to be referring to the uses of falsehoods to drive a political agenda, Ocasio-Cortez shot back at Cruz by making the Nazi analogy explicit.

“They wore Auschwitz shirts, erected gallows, and tried to hang the Vice President,” Ocasio-Cortez said of members of the pro-Trump mob that stormed the Capitol. “Your continued excusal and denial of Wednesday’s Neo-Nazi presence is abhorrent and dangerous. The most healing and unifying thing *you* can do is take responsibility for your actions and resign.”

“Your GOP colleague in the House praised Hitler this week,” Ocasio Cortez said, referring to a newly elected congresswoman who told pro-Trump protesters Wednesday that “Hitler was right about one thing”: the need to recruit youth.” A Confederate flag was hung outside the Museum of Jewish Heritage [in New York City]. Yet you continue to deny this clear connection in the aftermath of Wednesday’s violence. You disgrace yourself and your office further every day. Resign.”

“Ted, there were people who literally stormed the Capitol with zip ties to take hostages, and one person had a ‘camp Auschwitz’ tee-shirt,” Schatz said. “You don’t get to referee the words that anyone uses given your behavior over the last month.”

Cruz ignored Schatz and instead lashed back at Ocasio-Cortez, probably because as a high-profile House progressive she is more of a lightning rod for the right (as Cruz is for the left, a factor that could explain in part why Ocasio-Cortez lashed out at him).

“Epic hypocrisy,” he told Ocasio-Cortez. “Facts: 1) Nazis are evil bigots. 2) You & your anti-Israel pals blocked a resolution condemning anti-Semitism—which I passed unanimously in the Senate. 3) Unless they are genocidal, calling your political opponents Nazis is atrocious.”

The two lawmakers went back and forth, exchanging accusations about Israel, anti-Semitism and the boycott Israel movement.

Their debate resembled one that has riven the Jewish community during the four years of the Trump administration: The left perceives the greatest danger in the rise of the far right; the right emphasizes the growing tendency on the left toward disaffection with Israel.