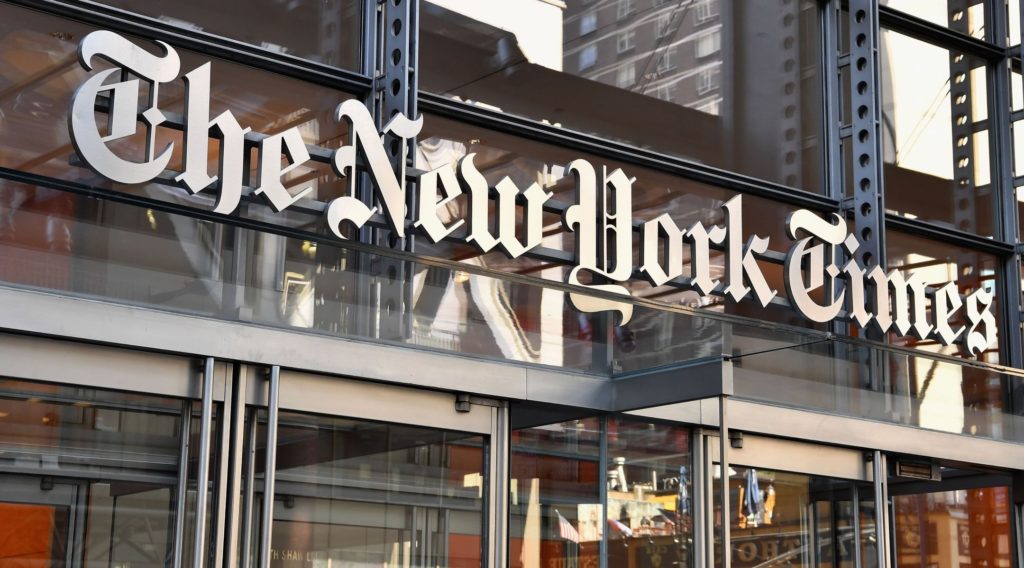 (JTA) — Alan Dershowitz was among dozens of protesters outside the offices of The New York Times in Midtown Manhattan who decried the newspaper’s publication of a cartoon with anti-Semitic imagery.

The demonstrators on Monday night chanted “shame on you” and carried signs reading “Anti-Israel, Anti-Semitic, NYT Guilty” and “NYT guilty of 120 years of hatred,” as well as a sign with a yellow Star of David that read “NYT, should I be wearing this too?” among others.

The image, which appeared Thursday in the opinion section of the newspaper’s international print edition, depicted Israeli Prime Minister Benjamin Netanyahu as a dachshund-breed guide dog wearing a Star of David collar and leading a yarmulke-clad President Donald Trump.

The newspaper in a first statement acknowledged that the image was “offensive” and “included anti-Semitic tropes.” A second statement on Sunday said the newspaper was “deeply sorry” and that the decision to publish the image was the product of “a faulty process” resulting in “a single editor working without adequate oversight.”

Dershowitz, a former Harvard law professor and major Israel advocate, spoke at the rally and said the cartoon “is very painful for me.”

“I have written many, many dozens articles for The New York Times. … I’ve been a strong supporter of The New York Times,” he said. “But when I saw that cartoon yesterday, it just put me in mind of a very dark time in Jewish history. And I asked myself, ‘How could it have happened?’”

He added: “The only good thing The New York Times has ever done for the Jewish people is that it put a lie to the notion that the Jews control the media and use it to support their own interests.”

The Times announced Monday evening that it had ended its relationship with the syndication service that supplied the cartoon.

Times columnist Bret Stephens, who is Jewish, said Monday at a panel discussion at the New York University Global Center that writing the op-ed in response to the cartoon was an “easy” choice.

“The moment I saw the cartoon, I realized I’m either going to denounce it or feel ashamed of myself,” he said.

Stephens also said “it was easy because the senior leadership at the Times — the editorial page editor James Bennet, and people, in fact, more senior to him — were horrified by the publication of the cartoon. It took them by surprise.”