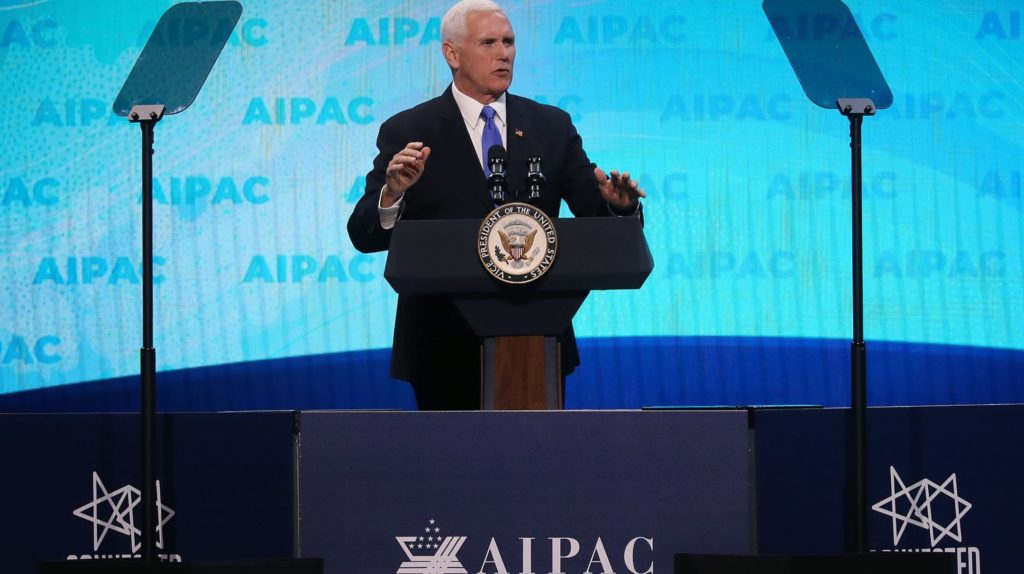 WASHINGTON (JTA) — The American Israel Public Affairs Committee wants you to know it will not be silenced.

“When they try to silence us, we speak up, and when they tell us to sit down, we stand up, we stand up,” Howard Kohr, the Israel lobby’s CEO, said in his set-the-tone speech at the launch Sunday of this year’s annual conference. “We. Stand. Up.”

Mort Fridman, AIPAC’s president, picked up the theme that afternoon.

“None of us are willing to be silenced or intimidated,” he said.

And Rep. Steny Hoyer, D-Md., who has had a long and close relationship with the lobby, made it the center point of his raise-the-roof speech on Sunday evening.

“What weakens us is when, instead of engaging in legitimate debate about policies, someone questions the motives of his or her fellow citizens or tries to silence others through exclusion, disenfranchisement or fear,” the majority leader in the U.S. House of Representatives said.

So 18,000 activists filling the capital’s streets and the halls of Congress will not be silenced. But what exactly are they saying?

That was less than clear, and the mixed messages AIPAC sent this week were emblematic of the crisis besetting the lobby whose brand is bipartisan consensus: When it comes to Israel, there is no longer much of a consensus.

The talk of “silencing” and intimidation seemed to be a response to an uprising on the left, emboldened by the controversy over Rep. Ilhan Omar, D-Minn. Weeks before the conference, the House newcomer accused AIPAC of distorting the Israel debate — and Israel’s supporters of an “allegiance” to a foreign country — in ways that Republicans and a good chunk of the Democratic caucus felt sounded anti-Semitic. Omar’s name was never mentioned from the AIPAC stage, but the audience understood knew exactly who Hoyer had in mind when he also said, “When someone accuses American supporters of dual loyalty, I say ‘Accuse me.’”

It’s a crisis, however, that runs deeper than the rift opened up by Omar. If Omar had never uttered a word about Israel, AIPAC’s agenda would still be dogged by differences between Democrats and Republicans — on recognizing Israeli sovereignty of lands it captured in 1967, on how best to combat the boycott Israel movement, and on the path forward, if any, for Israeli-Palestinian peace.

Take the Golan Heights. At the urging of Israel’s ambassador to Washington, Ron Dermer, the AIPAC audience on Sunday rose to its feet to thank President Donald Trump for recognizing Israeli sovereignty over the Golan.

“I think that deserves a standing ovation,” Dermer said.

But even as Trump and Israeli Prime Minister Benjamin Netanyahu were meeting Monday at the White House and Trump signed the proclamation recognizing the Golan as part of Israel, AIPAC’s legislative agenda lacked any reference to the issue.

It’s not that there isn’t any congressional legislation to back: Both chambers have bills under consideration, and Sen. Ted Cruz, R-Texas, has been touting recognition for a year.

The problem is that not a single Democrat has signed onto either bill. Democrats are concerned that recognizing sovereignty over the Golan could encourage Israel to annex the West Bank.

Even AIPAC’s statement welcoming Trump’s Golan announcement carefully avoided the word “sovereignty,” and linked the need for Israeli control of the plateau captured in 1967 to Syria’s current status as a failed state rather than a longstanding claim.

“Given current political and security circumstances in Syria, we have said it was inconceivable to imagine Israeli withdrawal from the Golan Heights,” AIPAC said. Trump’s “statement marks a dramatic change in American policy, and we appreciate his leadership on this issue.”

AIPAC represents a Jewish community that continues to vote overwhelmingly for Democrats, even if Republicans and Israel hawks seem to be overrepresented in the halls and leadership of the group. That presents a  difficult line for the lobby to walk, and one that Republicans — and the Netanyahu government — seem determined not to make easy.

Pending Republican legislation condemning anti-Semitism and the Boycott Israel movement may come from the heart, but it is also a convenient way to taunt Democrats and exploit a split between the party mainstream (who tended to denounce Omar) and its progressives (who defended Omar and also are leading opposition to anti-boycott bills on free-speech grounds).

Vice President Mike Pence was certainly in no mood for bipartisanship when he told AIPAC delegates on Monday that the Democrats were “co-opted” by anti-Semites. He also repeated a falsehood — one stoked by wishful thinking on the left and opportunists on the right — that eight Democratic presidential candidates were boycotting the conference. (AIPAC, in fact, did not invite the candidates to speak, per its usual off-year protocol.)

“There are leaders who are calling to return to that deal,” he said, which was “unacceptable.” Asked whether he believed support for Israel was bipartisan, Dermer said, “Yes, I do” — and left it at that.

The legislative package that the activists will take to Congress on Tuesday also signals AIPAC’s difficulties in reconciling the parties. It includes a House resolution that condemns the Boycott, Divestment and Sanctions movement targeting Israel sponsored by Reps. Jerry Nadler, D-N.Y., Lee Zeldin, R-N.Y., and Brad Schneider, D-Ill. All three are Jewish.

It’s the kind of mom-and-apple pie resolution all sides can usually get behind. But the nonbinding measure is a bid by Democrats to cut off bills preferred by Republicans (and backed by AIPAC) that would help states penalize boycotters, which most Democrats believe impinge on speech freedoms.

The resolution is an attempt to split the difference — denouncing BDS while not criminalizing it.

Although Republicans are signed on to the resolution, they also appear determined to press ahead with the separate, punitive anti-BDS bills. (Another bill Republicans reportedly are planning to advance would expand Education Department powers to investigate and possibly penalize campuses deemed as hostile to Jews — a gambit that also unsettles civil libertarians.)

The Nadler-Schneider-Zeldin bill also resoundingly backs the two-state solution, which Republicans removed from their party platform in 2016 and from which Trump and Netanyahu have retreated.

AIPAC still formally backs the two-state solution, but the only mention it earned from the group’s officials in the main conference hall was when three of the organization’s top lobbyists briefed activists on the agenda. Even then, late Sunday evening, the hall was mostly empty.

The difficulties of resolving the differences between two-state advocates and opponents were made tangible after Monday’s sessions ended. Activists headed to multiple off-campus events: One, at the Renaissance Hotel across the street from the Convention Center, was for “Peace Builders,” attracting AIPAC activists who otherwise are involved in Palestinian-Israeli reconciliation. The event had AIPAC’s official imprimatur and earned a visit from Kohr; support for two states was explicit and ubiquitous in remarks that organizers and guests delivered.

The speakers celebrated the revival of bipartisan legislation that would fund dialogue programs. (Notably, AIPAC is not backing the legislation, which sources say is reviled by a Trump administration that has cut all funding to the Palestinians).

A few blocks away, at the Bible Museum, founded by pro-Israel Christian evangelicals, delegates gathered for the Judea and Samaria reception organized by Israel’s settler movement. Among those attending were top figures in Netanyahu’s Likud party. Here, “two-state solution” was spat out by speakers like a curse.

A consensus remains on AIPAC’s bread-and-butter issue, funding for Israel’s defense. One ask was for lawmakers to support $3.8 billion in defense assistance next year.

Except even that had a wrinkle. The three lobbyists speaking to the empty hall on Sunday night said that the activists should include in their pitch an ask for a “robust overall aid bill.” AIPAC for years has aligned itself with nongovernmental organizations that lobby for increasing foreign aid — an increasingly difficult posture in an administration that leans isolationist.