AIPAC is coming, but no one knows who’s speaking

WASHINGTON (JTA) — AIPAC is coming, but no one knows who’s speaking.

Just about two weeks before the activists come to town for the largest U.S. Israel lobby’s annual conference, AIPAC has no speakers listed on its convention website.

(The formal start is March 1, but informal events will begin two days prior.)

It’s pretty accurate to call the conference an elite crash course in U.S. Middle East policy, albeit viewed through the tint of AIPAC’s pro-Israel outlook. And there will be plenty of speakers, on the main stage and in the sidebars. That won’t change.

This year, if you were hinging your decision on spending $599 on the quality of speakers, you’re told, “Check back for confirmed speakers for the 2020 Policy Conference.”

AIPAC won’t say what was behind the delay. So here’s some speculation from someone who has attended 17 of these confabs: AIPAC does not want Democrats who are still on board with its centrist pro-Israel agenda to be subject to outside liberal pressure not to show up.

Last year MoveOn, the grassroots progressive movement, said that Democratic presidential campaigns were heeding its call to boycott AIPAC. But that was a fabrication of sorts: AIPAC does not host presidential candidates as speakers except in the years when the White House is up for grabs.

Well, 2020 is an election year, and progressive activists have been back at it. This time they have been staking out candidates at campaign events and asking them to boycott AIPAC (in addition to asking for other pledges).

At least one candidate among the Democrats, Sen. Elizabeth Warren of Massachusetts, has heeded the efforts and said she will skip the conference.

It looked as if AIPAC would dodge a bullet this conference, Warren’s pledge aside. But then it stepped on its own feet and now the calls to marginalize the organization are coming from a veteran congresswoman, Betty McCollum.

AIPAC featured McCollum, a Minnesota Democrat, and two congresswomen known for their sharp critiques of the lobby  — Rashida Tlaib of Michigan and Ilhan Omar, also of Minnesota — in one of at least two Facebook ads lacerating some Democrats as “radicals” pushing “anti-Semitic and anti-Israel policies.” McCollum is the lead sponsor of legislation that would link aid to Israel to its treatment of juvenile Palestinians in detention.

(An interesting wrinkle: McCollum chided Omar last year for not taking into account “the effect her words have” after Omar slammed AIPAC in terms that Jewish groups and some Democrats saw as anti-Semitic.)

AIPAC pulled the ads and apologized for their tone, but that was not enough for McCollum, who called the lobby a “hate group.” She said she wants Democrats to “take a stand” on the organization.

McCollum has history with AIPAC: In 2006, her office said an AIPAC lay leader accused her of backing terrorism for opposing cuts to what at the time was a pittance (about $20 million) in annual aid to the Palestinians. (The volunteer denied it.) Gary Ackerman, a Jewish congressman with close ties to the lobby, organized a meeting between McCollum and Howard Kohr, AIPAC’s director.

Both times, notably, what irked McCollum was AIPAC likening her to terrorists. The Facebook ad linked to an online petition that said, “It’s critical that we protect our Israeli allies especially as they face threats from Iran, Hamas, Hezbollah ISIS and — maybe more sinister — right here in the U.S. Congress.”

AIPAC amended the petition to eliminate the portion suggesting that Israel critics in Congress were “more sinister” than ISIS, but only after Halie Soifer, the director of the centrist Jewish Democratic Council of America, basically stepped in to mediate.

This time, the rift between McCollum and AIPAC seems irreparable, and it may have ripple effects. I’ve heard noise that Sanders might change his mind about whether he would boycott AIPAC.

Ripple effects, but apparently not a tidal wave: A substantial number of top Democrats this week echoed the lobby’s calls to push back against the United Nations for posting a list of companies that do business with West Bank settlements. Both AIPAC and Rep. Steny Hoyer, the House majority leader, cast the list as part of the movement to boycott, divest from and sanction Israel, although the U.N. list focuses only on settlements.

Sanders surging: In 2016, Bernie Sanders became the first Jewish candidate to win major-party nominating contests. This week, he made history again. His popular vote win in Iowa and his outright win in New Hampshire, as well as his polling, make Sanders the front-runner for now. My colleague Phillissa Cramer has the story.

Grumpy Old Pashas: Mahmoud Abbas, the unpopular Palestinian Authority president, and Ehud Olmert, the disgraced Israeli ex-prime minister, reunited at a New York hotel to recall good times, when the United States held peace conferences that included both Israelis and Palestinians. My colleague Ben Sales entered the Twilight Zone so you didn’t have to.

Mikey writes it: Bloomberg joins Buttigieg and Biden in writing for JTA about how he would combat anti-Semitism. 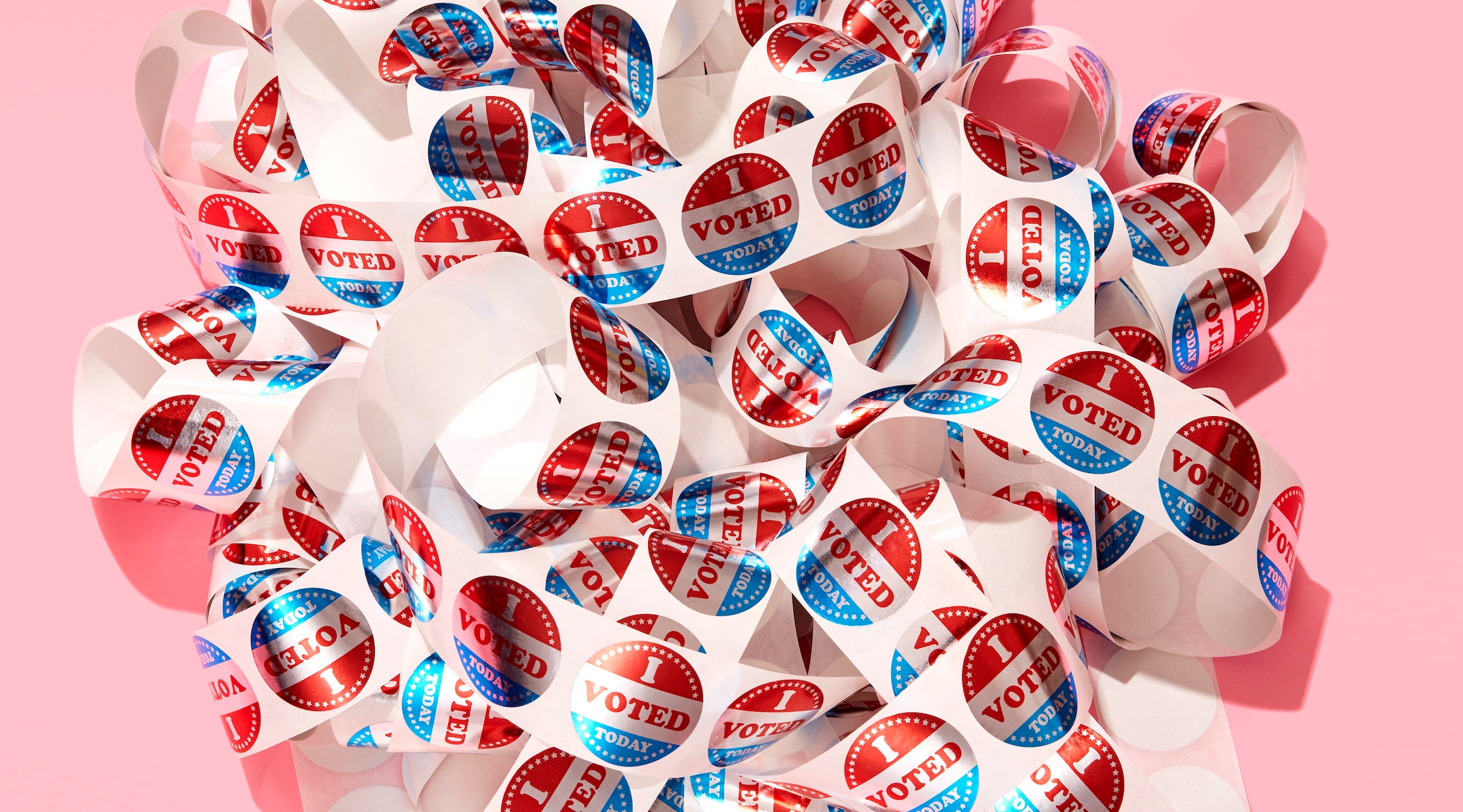 Lara Friedman, the president of the Foundation for Middle East Peace, analyzes the significance of the Jewish vote in the 2020 election for the Arab Center Washington DC. Friedman notes the vast differences between what Jewish voters want and what Jewish political funders like Sheldon Adelson want, and pays attention to a lesser-known aspect of Jewish campaigning: the down-ballot. “Forcing Democrats to constantly fend off accusations of being anti-Israel or antisemitic siphons off campaigns’ time, energy, political capital and funds,” she writes.

Klobesmentum. (I am hearing people referring to her as Klobes.)

Amy Klobuchar, the Minnesota senator, finished third in New Hampshire, following Sanders and Buttigieg. Jewish Twitter couldn’t resist contemplating what the appropriate neologism was to describe the phenomenon. Josh Chafetz, a Cornell law professor, came up with Klobucharge. Eric Columbus, a former top Obama Justice Department official, wants you to use Momenklar. But Garance Franke-Ruta, the executive editor at GENmag, nails it.