WASHINGTON (JTA) — The American Israel Public Affairs Committee apologized for and removed at least two Facebook ads that slammed “radical” Democrats in Congress, and altered a petition that said Israel’s harshest critics in Congress pose a threat “maybe more sinister” than ISIS and other terror groups.

In a statement posted Saturday on Twitter, the lobby offered its “unequivocal apology to the overwhelming majority of Democrats in Congress who are rightfully offended by the inaccurate assertion that the poorly worded, inflammatory advertisement implies.”

The AIPAC apology was attached to an earlier tweet by Eli Clifton, an investigative journalist who first brought one of the Facebook ads to light. An AIPAC official told the Jewish Telegraphic Agency the apology applied also to another inflammatory Facebook ad and to the petition linked in the ads. AIPAC rarely if ever apologizes for its content.

The controversy comes just weeks before AIPAC’s annual conference in early March and at a time that a number of left-wing activist groups are pressuring Democratic presidential candidates to boycott the conference. In response to a question at a campaign event in Derry, New Hampshire on Thursday, Sen. Elizabeth Warren indicated she would skip the AIPAC conference.

AIPAC’s brand is bipartisanship, a path that is becoming more difficult to maintain in a polarized environment. The top post on its Facebook page currently is headlined “Policy over Partisanship” and showcases an array of leaders from both parties addressing past policy conferences.

The two ads, which an AIPAC spokesman said were targeted to pro-Israel Democrats, started appearing on Facebook in late January and were removed Friday. In an email to JTA on Friday, before AIPAC posted the apology, the spokesman said the targeted audience had “responded very positively.” The petition is still live on the web.

In the ad Clifton posted, two little girls are wrapped in Israeli and American flags against a desert background, with a banner that says “Protect our Israeli allies.”

“The radicals in the Democratic Party are pushing their anti-Semitic and anti-Israel policies down the throats of the American people,” the text said. “American should never abandon its only Democratic ally in the Middle East. Sign the letter to Democrats in Congress — don’t abandon Israel!”

Halie Soifer, the director of the Jewish Democratic Council of America, provided JTA with screen captures of another ad that had appeared and two versions of a petition that the ads linked to. Soifer’s group champions moderate Democrats and has criticized some of the same targets identified by AIPAC in the ads, albeit in more considered terms. She said she had forwarded the ads to an AIPAC official, asking “What is this?”

In one of the ads Soifer provided, the same text used in the ad with the little girls was attached to a collage of three Democratic congresswomen: Reps. Rashida Tlaib of Michigan, Betty McCollum of Minnesota and Ilhan Omar of Minnesota. Tlaib says Israel should not exist as a Jewish state; Omar and McCollum back the two-state solution, as does AIPAC. Omar and Tlaib back the boycott Israel movement. McCollum is the lead sponsor of legislation, backed also by Omar and Tlaib, that would link assistance to Israel to its treatment of incarcerated Palestinian minors.

Tlaib and Omar have been accused by Jewish groups, Republicans and some Democrats of peddling anti-Semitic tropes insinuating that Jews wield disproportionate power. Omar has apologized for some, but not all, of her statements.

Soifer also shared two screen grabs to the petition linked in the ad. Each said, “radicals in Congress are threatening the U.S.-Israel relationship by reducing or cutting aid and military assistance, encouraging the boycott of Israeli companies, and using plainly anti-Semitic language.” 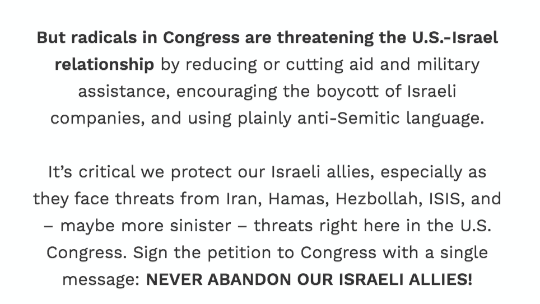 Soifer said the first version was altered after she had asked AIPAC about the ads and the language in the petition. The petition remains live on the web with the second, less inflammatory text intact. An AIPAC spokesman on Friday — before the apology for the ads — said the language warning of “sinister” radicals in Congress “was modified for clarification purposes.”

The AIPAC apology was not entirely unqualified. The ads, it said, “alluded to a genuine concern of many pro-Israel Democrats about a small but growing group, in and out of Congress, that is deliberately working to erode the bipartisan consensus on this issue and undermine the U.S.-Israel relationship.”

The AIPAC spokesman also provided JTA with an older AIPAC ad targeting Rand Paul, a Republican senator from Kentucky, for holding up aid to Israel in 2018. That ad also was sharply worded. Paul, it said, “wants to abandon our Israeli allies.” But it did not identify his party, call Paul a “radical,” accuse him of anti-Semitism or compare him to terrorists.

AIPAC’s efforts to be on-brand and bipartisan have been frustrated in recent years by the appearance that it is more willing to confront Democrats over differences. In 2015, it ran a full-throated and public campaign against the Obama administration’s Iran nuclear deal. By contrast, its opposition to its differences with the Trump administration — over President Donald Trump’s retreat from a two-state outcome to the Israeli-Palestinian conflict, and his defunding of assistance to the Palestinians and of dialogue programs — has been expressed behind the scenes, if at all.

AIPAC has in policy conferences in recent years emphasized its outreach to progressives, including by hiring staff dedicated to making inroads on the left.

The controversy gives fodder to left-wing groups that identify AIPAC as conservative and even partisan. “AIPAC is spending money in ads attacking the Democratic Party,” Yonah Lieberman, the cofounder of IfNotNow, a group leading the campaign to persuade Democrats to boycott this year’s AIAPC conference. “Why would any Democrat, candidate or otherwise, go to AIPAC this year?”

IfNotNow took credit for the questioner, identified as Sarah O’Connor, who pushed Warren on the AIPAC conference. Warren answered “yeah” when asked if she was planning to skip the conference. The candidate did not push back against O’Connor’s questionable assertion that AIPAC was forging an “unholy alliance” with “Islamapohobes and anti-Semites and white nationalists” and insistence that “no Democrat should legitimize that kind of bigotry by attending their annual policy conference.”

“Spending millions of dollars on progressive outreach can’t distract from the fact that a surrogate group it has helped set up has been attacking Democratic candidates and progressive voices who are seeking peace, justice and rights for both Israelis and Palestinians.

Soifer in an email suggested AIPAC was risking its relationship with its most critical constituency, American Jews. “The overwhelming majority of American Jews are Democrats, and they reject the use of Israel as a political wedge issue,” she said.