Ahead of the Trump-Putin summit, 5 things you probably didn’t know about Finland and the Jews 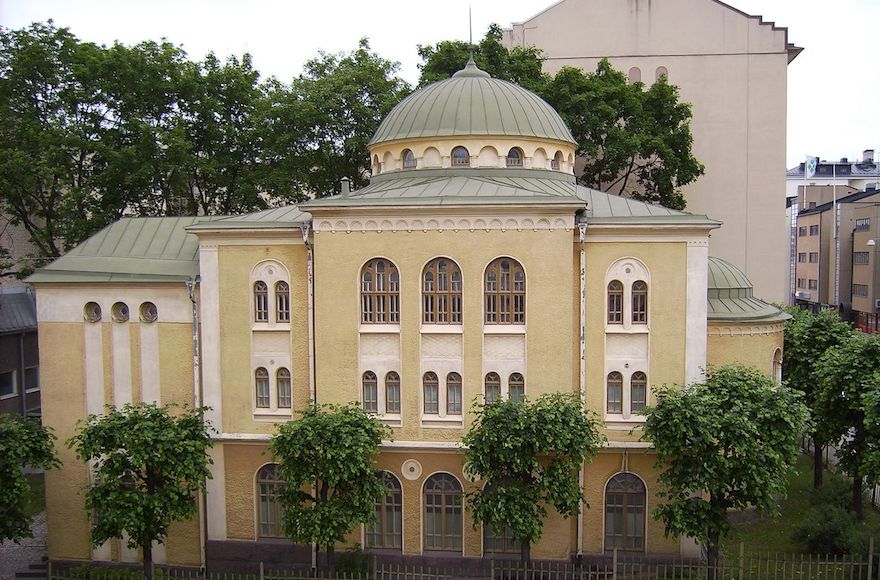 This synagogue in Turku is one of the two in Finland. (Wikimedia Commons)

(JTA) — Next week’s summit meeting between President Donald Trump and his Russian counterpart Vladimir Putin in Finland recasts the Scandinavian nation in a role it had not occupied in decades: that of a political bridge and broker between Russia and the West.

An EU democracy whose border with Russia is longer than the distance between New York and Chicago, Finland during the Cold War relied on centuries of diplomatic experience to chart a cautious course, independent of both blocs, before fully aligning with the West following the Soviet Union’s collapse.

To Jews, though, even after that war Finland continues to serve as a portal between worlds — a function that resulted in a fascinating history full of unlikely twists and unique phenomena.

With all eyes on Finland ahead of the summit, JTA collected five anecdotes connected to the country’s extraordinary Jewish history.

Finnish Jewry was born in sin.

Whereas most of Europe’s Jewish communities began with merchants seeking new horizons, Finnish Jewry’s onset is rooted in a barbaric and racist crime against some of society’s most vulnerable members: impoverished Jewish children. That’s because the earliest Jewish settlers in Finland were former Cantonists, children and boys who until 1856 were forcefully conscripted into the army of czarist Russia for as long as 29 years.

Finland was just a scarcely populated Russian protectorate back then — it broke away and declared independence in 1918 — but its relative independence as a frontier zone appealed to the returning soldiers. They wanted to get as far away as possible from the government that tore them away from their families for decades of arduous service only because they were Jews. In Finland, hundreds of them “had finally overcome the system and found a safe haven,” Andre Swanström, chairman of the Finnish Society of Church History, wrote in a 2012 essay titled “Nicholas I and the Jewish Cantonist Soldiers in Finland.”

Finland, a nation that has always strained under the yoke of Russian domination, fought in World War II against the Soviet Union with German support and arms in what is known in Finnish as Talvisota, or the Winter War. Staving off a Russian invasion against all odds, the Finns stabilized the front around the Karelian forests in the country’s south, where eventually German soldiers also deployed, fighting alongside Finns – including Jews. This anomaly owed to the refusal by Finland’s Field Marshal Karl Gustav Mannerheim to hand over any of Finland’s 2,700 Jewish residents to the Nazis despite their requests. As a precaution, Mannerheim ordered that no Finnish Jewish soldiers should serve under the command of his German allies. The Jewish troops even had a field synagogue, where dozens of them prayed there regularly, less than a mile away from the German army’s main deployment in their native country.

The situation created plenty of awkward interaction, according to Gideon Bolotowsky, a former leader of Finnish Jewry. His late father, Sholom, served in the Finnish army as an interpreter and liaison to German troops.

“When the Germans asked my father how come he speaks such good German, he would tell them ‘It’s important to know your enemy’s language,’” Bolotowsky recalled, laughing. “They didn’t like his answer very much.” 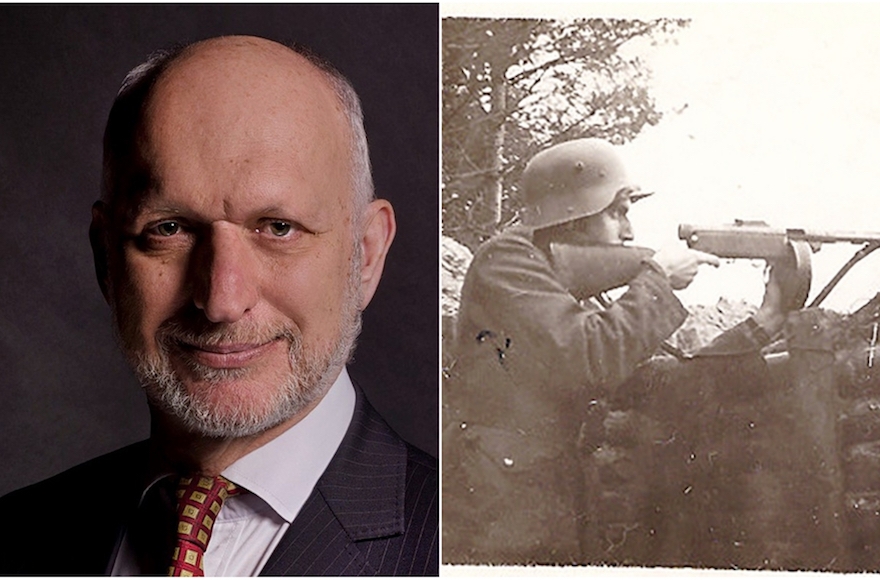 Gideon Bolotowsky, left, is a former leader of Finnish Jewry. His late father, Sholom, is shown wearing a German-made uniform and holding a Finnish machine gun during World War II. (Courtesy of Bolotowsky)

He even has an old photograph showing his father wearing a gray Wehrmacht uniform – courtesy of the German war machine – and toting a Finnish machine gun.

“He felt awkward doing it,” Bolotowsky said of his father. “But you’re in the army. You follow orders.” Sholom and his brother Haim both served alongside the Nazis for three years until 1944.

Bolotowsky’s other uncle, incidentally, was fighting with the Russians against the Finnish and German forces. His family history demonstrates how the frontline in Finland was the first major international military campaign in Europe since World War I in which Jews were fighting on opposite sides.

One Jewish physician serving in the Finnish army, Leo Skurnik, treated German SS soldiers under fire so valiantly that German officers decided to award him the Iron Cross citation even though they knew he was Jewish, according to a 2014 expose on Finnish-Jewish war veterans in the Daily Telegraph. Upon learning of the award, Skurnik told his Finnish commanding officer to tell the Germans: “I wipe my ass with their award.” The commander, Hjalmar Siilasvuo, relayed the message verbatim, according to the article. Skurnik never did get the citation.

The last of the unjust?

More than seven decades after the Holocaust, Finland this year became the latest European nation to announce an official inquiry into the complicity of its troops in the genocide.

President Sauli Niinisto announced the first committee of inquiry of its kind in January following the recent discovery of written testimony by a Finnish Waffen SS officer who said he actively participated in the mass murder of Jews in Ukraine.

It was a major blow to a nation that prides itself on being one of a handful of countries that stood up publicly to the Nazi policy of genocide.

After all, until the discovery it was believed that Finnish officials saved all but seven of the country’s 2,700 Jews — including 300 immigrants who weren’t even citizens (a police chief’s plan to deport in secret the 300 foreigners was foiled by his superiors).

But Andre Swanström, the chairman of the Finnish Society of Church History, last year flagged to the Simon Wiesenthal Center the incriminating letters of Finnish volunteers serving in the Nazi SS unit. This set in motion the current inquiry by state-appointed historians.

In one letter, Finnish SS soldier Olavi Kustaa Aadolf Karpo complains to officer and military chaplain Ensio Pihkala about having to shoot Jews — but not for any moral qualms. Rather, he cites his desire to fight the Russians and writes “for the execution of Jews, less skilled personnel would have sufficed.”

In their letters, Karpo and fellow SS men also protested being sent on a factory detail while their brothers in arms got the chance to “shoot some pickle-headed Ivanovichs” – a reference to Russians. Following World War II, Karpo immigrated to Venezuela, where he died in 1988. At least five other Finns participated in war crimes against Jews, Swanström wrote.

The Finnish route to freedom

Even before the official dissolution of the USSR in 1991, Christian Zionists began using Finland as a pipeline for getting Soviet Jews out. In 1990 Ulla Jarvilehto, a Finnish activist for aliyah, or immigration to Israel, coordinated from Helsinki the very first aliyah flight of the International Christian Embassy Jerusalem, or ICEJ. By the end of that decade, ICEJ had sponsored 54 full airplanes and brought more than 15,000 olim, or immigrants, through what became known as the “Finnish Route.” It turned Helsinki into a major portal for the Jewish communities of northeastern Europe, including Riga and St. Petersburg. In many of these flights, Russian immigrants to Israel flew with Christian Zionists on their pilgrimage, leading to emotional encounters, according to Howard Flower, ICEJ’s aliyah director.

Today, leaving Russia is far less chaotic than it was in those early years. But the Finnish Route is still popular with Russian immigrants to Israel (there were 7,224 of them in 2017, making Russia Israel’s largest provider of new immigrants that year). That’s because nowadays, Finnish Christian Zionists host Israel-bound Russian families in their homes for a few days of rest and relaxation before they take the plunge and brave the bureaucratic and cultural challenges connected to aliyah.

“The hosts basically give the families a Finnish spa experience, but in a family setting,” Flower said. “Think long saunas and delicious Scandinavian meals.”

Sandwiched between Sweden, which many regard as a trouble spot for Jews, and Russia, with its centuries-long history of persecution, Finland is perhaps the only European country where Jews have had uninterrupted safety since the beginning of their presence there. The country has seen no physical assault against a Jew in decades and anti-Semitic hate speech is also rare. Neo-Nazism is a fringe phenomenon without a real street presence  and jihadism isn’t a major issue: Unlike its Nordic neighbors, the country of 5.4 million residents has not opened its doors to Muslim immigration. Finland is believed to have about 40,000 Muslims and 1,400 Jews.

The Jewish community in 2013 received a new chief rabbi, Simon Livson, who was 30 at the time of nomination — one of the world’s youngest bearing the title.

Of course, life as a Jew in Finland isn’t perfect. The production of kosher meat, as well as halal meat, is illegal, and the ritual methods for slaughtering animals are deemed cruel. And there’s the challenge of fasting on Tisha b’Av for about 19 hours — the amount of daylight that Helsinki gets in summer. But being pro-Israel is probably less controversial in Finland than anywhere else in Nordic Scandinavia.

In recent years, Finland and Denmark have emerged as Israel’s closest allies in that region, where the Palestinian-Israeli conflict has soured the Jewish state’s reputation and diplomatic relations with Sweden, Norway and Iceland. Earlier this month, the Finnish media reported that Finland, a high-tech and communications innovator with few natural resources, will purchase Israel’s Gabriel naval missiles. It’s a huge deal estimated at $500 million.

Such relations would have been unthinkable when Finland’s foreign policy was still designed to mollify its neighbor to the east, the famously anti-Israel Soviet Union. Back then, Finland aligned itself in the United Nations with Moscow when it came to the Middle East, according to Bolotowsky, the former communal leader.

“It was a cheap gesture to curry favor with Russia,” he said of Finland’s anti-Israel voting record in international forums. “But those days are long gone.”

The post Ahead of the Trump-Putin summit, 5 things you probably didn’t know about Finland and the Jews appeared first on Jewish Telegraphic Agency.