After NYC’s threat, mask wearing increases in Orthodox neighborhoods — at least on the streets

(JTA) — Almost as soon as New York City warned that consequences including school closures were possible for neighborhoods with high COVID-19 infection rates, mask wearing increased in Borough Park and Midwood, two Orthodox Jewish neighborhoods in Brooklyn at the center of the city’s new COVID outbreaks.

Where few people had been wearing masks on the street before the warning, many boasted them afterward.

The change drew praise from the city’s mayor, Bill de Blasio, who said midweek that even though the number of coronavirus cases in New York City’s cluster neighborhoods had continued to rise, he did not think the heavy restrictions threatened last week — including shutting down nonessential businesses, banning gatherings of more than 10 people and possibly closing schools — were needed yet.

“What we are finding initially as the more there is communication with members of the community about the importance of wearing masks, the more there’s free mask distribution, and obviously a sense that there are consequences to not wearing masks, the more we are seeing people pick up on that and wear a mask, and that’s going to be part of how we turn the situation around,” de Blasio said Wednesday.

But residents said the increased mask wearing on the streets is not always reflected indoors — and that the uptick in cases has not renewed fear of the deadly disease circulating in the community.

Instead, Borough Park residents said, the increase in mask wearing is all about keeping the yeshivas from closing down.

“It’s not about the virus anymore,” said one Borough Park mother of the reasons people are wearing masks. Parents had not forgotten the closure of yeshivas in March and April, she said, leaving them at home in small apartments with many children for weeks on end.

“They’re not willing to go through that again,” she said.

Last Friday, cars circulated in Borough Park with messages in Yiddish asking people to wear masks on the street so the city would not close yeshivas. A number of yeshivas even put out a robocall that afternoon shortly before Shabbat asking people to comply with the mask guidelines to avoid a closure of yeshivas. 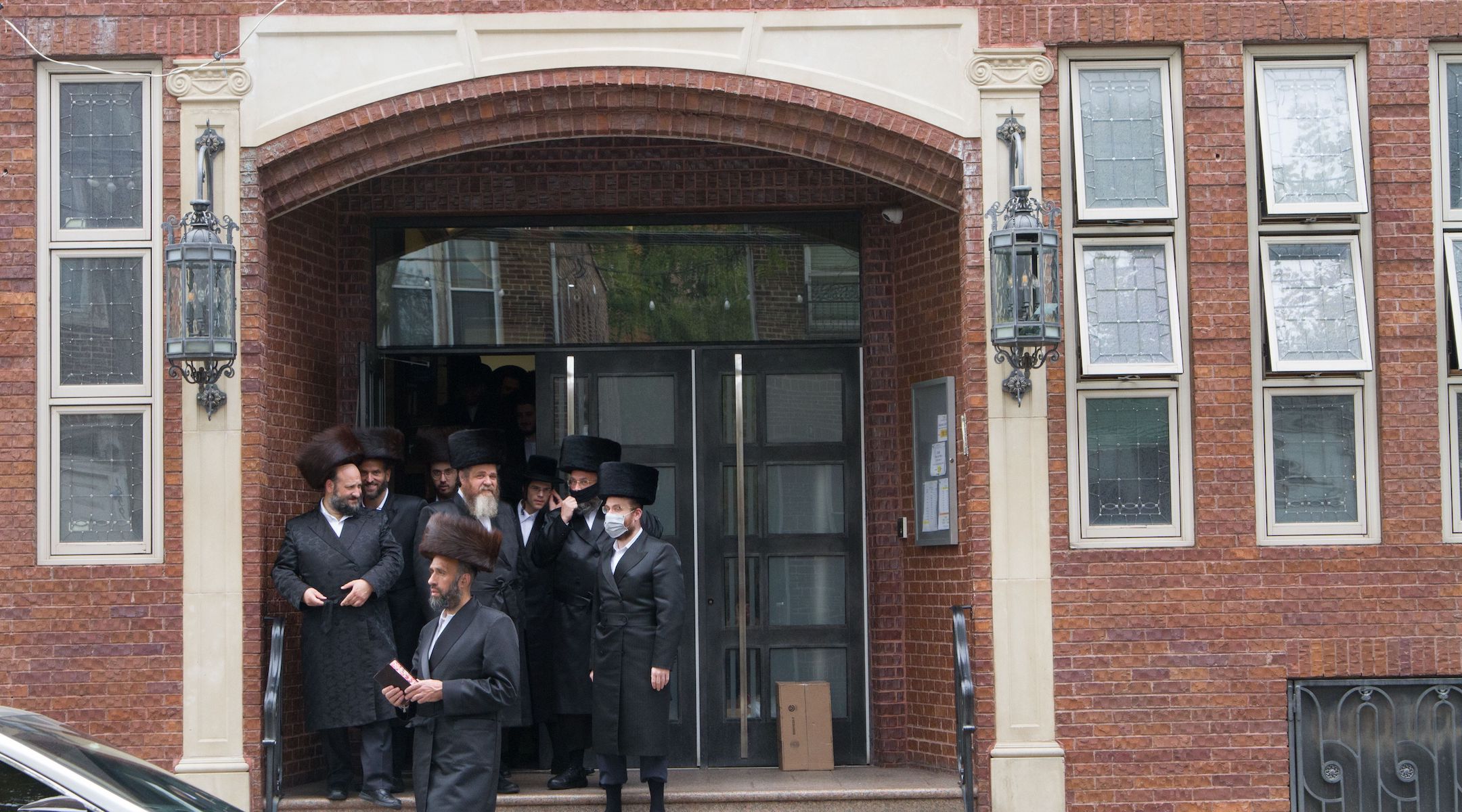 Some men wear masks as they exit a Midwood synagogue, Sept. 27, 2020. (Daniel Moritz-Rabson)

But on Yom Kippur, worshippers at several Borough Park synagogues said there were no masks worn at indoor services at several large Hasidic synagogues in the neighborhood. Even at the synagogue of Rabbi Mordechai David Unger, the leader of a faction of the Bobov community who was photographed Sunday wearing a mask outdoors hours before the solemn holiday, two attendees said there were no masks in sight.

One Borough Park resident, who declined to be named for fear of backlash, said he prayed at a small synagogue on Yom Kippur where no one wore a mask.

“It’s all an outdoor show for the media,” he said. “No one wears the mask indoors, in the packed shul.”

The city has begun inspecting local businesses and schools, and citing those that violate city rules about mask wearing and social distancing. City agencies had visited 130 businesses in the affected neighborhoods and handed out 16 warnings, as well as 160 inspections of nonpublic schools in the affected neighborhoods as of Thursday morning. Meanwhile, messages about Jewish businesses being fined for serving unmasked customers circulated Thursday on social media and through WhatsApp.

On Friday, Patrick Gallahue, a spokesperson for the city’s Department of Health and Mental Hygiene, said representatives of the department were doing outreach to local synagogues as well as visiting to ensure compliance.

“Health has done visits, but I wouldn’t frame this as inspections,” he told the Jewish Telegraphic Agency in an email. “There have been conversations with leaders in the community to ensure that guidance is understood.”

Yosef Rapaport, a public relations professional in Borough Park, said the increased mask wearing was still a positive even if the main motivation right now is to stave off consequences. He added that more must be done to help residents in his neighborhood understand coronavirus risks.

“It is a dire situation, so if scaring people straight is a method of getting people to do what needs to be done immediately,” he said, it might still help.

But in the long term, Rapaport said, the threat of punishment will not effectively address the situation. Instead, he argued for educating community members on the way the virus spreads and how it affects people.

“People need to understand how this virus works,” Rapaport said, “and that is still lacking tremendously.”

While the mayor has encouraged residents of the Zip codes experiencing upticks to be tested for COVID, some in the community have expressed skepticism about the value of testing. Flyers have circulated discouraging testing, or encouraging those with coronavirus antibodies to be tested to drive down the positivity rate rather than as a means to root out and isolate cases to stop the disease’s spread.

Local Orthodox lawmakers from Brooklyn and Queens encouraged testing in an op-ed Wednesday in Hamodia, explicitly calling out those who argued, much like President Donald Trump has in the past, that if no one were tested, there would be no positive cases.

“That is not a solution in our community, and in fact, may be playing a role in our high numbers,” they wrote in the Orthodox publication. “Those who are presently testing in our community are typically either symptomatic in some way, are tested as part of routine health care, or are required to test in order to return to work or attend school. The testing is unavoidable. What is avoidable is our positivity numbers.”

But some of those lawmakers also called out the media for focusing so much attention on members of the community who did not wear masks.

“What you won’t see on the evening #FakeNews: a majority of my constituents wearing masks,” State Assemblyman Simcha Eichenstein wrote in a tweet, sharing a video that circulated widely on Orthodox social media accounts and WhatsApp of a cameraman taking footage of Orthodox Jews walking in Brooklyn. The person taking the video accuses him of recording only those who are obviously Jewish and not wearing masks.

“What you will see: TV cameras waiting for an Orthodox Jew not wearing a mask so they can reinforce their biased narrative,” Eichenstein continued. “Don’t play politics with COVID-19. Enough maligning our community.”

“MOST OF OUR NEIGHBORS ARE WEARING MASKS, EVEN WHILE WALKING THE STREETS,” he wrote. “The press wants you to think otherwise. Typical.”

A response came quickly from one of his local followers: “I don’t think it was like this until the Mayor’s recent threats.”

On Friday morning, de Blasio again said he was considering consequences in areas of the city with high infection rates — a list that features mostly, but not only, heavily Orthodox neighborhoods. Gov. Andrew Cuomo said he might start fining cities that do not enforce rules meant to contain the virus.

The post After NYC’s threat, mask wearing increases in Orthodox neighborhoods — at least on the streets appeared first on Jewish Telegraphic Agency.