KYIV, LVIV and UMAN, Ukraine (JTA) — For some of the tens of thousands of Hasidic pilgrims on their way to the raucous Rosh Hashanah celebrations in Uman, the western city of Lviv acts as a stopover in a long journey to the eastern part of the country from access points in Central and Western Europe.

But so far this year, Lviv has enjoyed an unexpectedly vibrant High Holidays season of its own. Rosh Hashanah was celebrated by larger numbers of Jews than usual, from all over Ukraine — many of them taking part in celebrations for the first time ever, according to the head of the city’s Hillel center.

“In previous years it was hard to get people to come, but now we don’t have enough seats” for services in the Hillel’s building that fits 50-60 people, said Nataliya Tolok, the head of the local chapter of the organization for young Jewish adults around the world.

The change was not spurred on by a natural revitalization of the local community. Rather, the Russian invasion in the east has turned Lviv, the largest city in western Ukraine, which sits right next to the Polish border, into a hub of refugees looking to escape violence. More than seven months into the war, the local Hillel and the only functioning synagogue in town are still distributing tens of thousands of food parcels. They primarily help the local Jewish population but also aid non-Jews in need.

“Everybody was solemn and serious” this Rosh Hashanah, said Rabbi Mordechai Bald, the city’s chief rabbi and leader of the Tsori Gilod Synagogue, which had a high turnout on Rosh Hashanah. “We don’t know what is waiting for us in another year, especially here in Ukraine. There’s a fear of another wave of attacks because of the Russian mobilization, this fear just looms over us. This sense of emptiness was tangible. It was so real.” 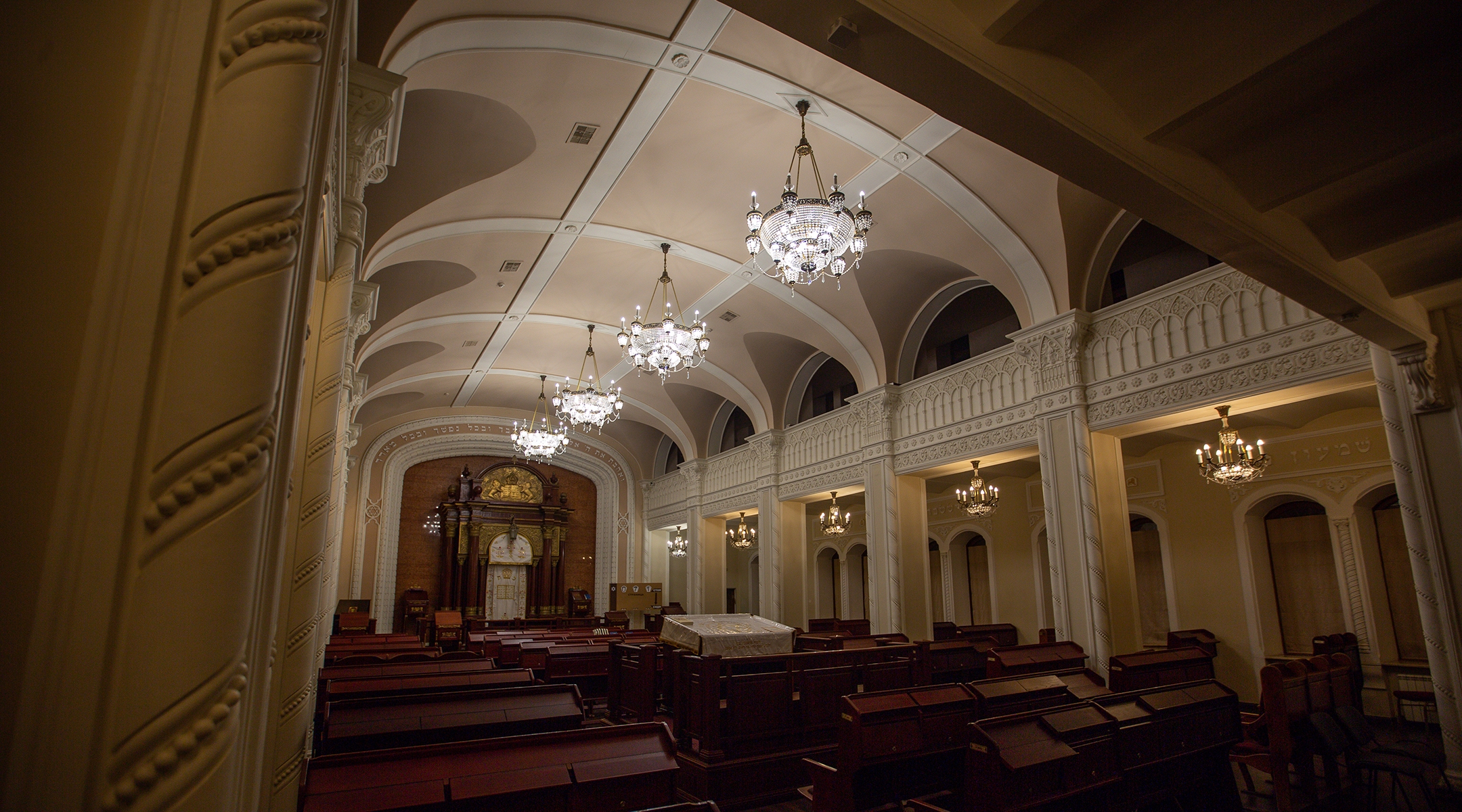 The Brodsky Synagogue in Kyiv is one of the country’s largest, but it is now often empty. (David Saveliev)

While the Jewish migration to Lviv is symbolic of how the war has displaced so many Ukrainians, High Holiday services there have proven to be outliers in a country that has seen thousands of Jews leave for Israel and elsewhere since February.

In the capital Kyiv, which before the war was home to a large and thriving Jewish community, the historic Brodsky Synagogue is now half empty. In winter and spring, it housed hundreds of refugees, but by now many Jews have fled the country. The city’s other synagogues also saw their High Holiday numbers slashed to fractions of the usual.

“Now it is quiet, but I know it’s a temporary quiet,” said Rabbi Moshe Azman, who leads the Brodsky synagogue and is one of multiple men to claim the title of Ukraine’s chief rabbi. He added that his synagogue has also spent upwards of $2 million evacuating Jews from all over the country.

“Russia mobilized soldiers, but we prepare for the holidays and do what we can, send care packages to Jewish soldiers and so on,” Azman said. “We will do everything to bring people a smile in these hard times.”

Despite the somber atmosphere, an event two days after Rosh Hashanah symbolized the warming of Ukraine’s relations with its Jewish population — ties that historically have been fraught with bloodshed.

On Thursday, the Ukrainian Institute of National Memory — a government-affiliated body that had been run by controversial nationalist voices from 2015 to 2020 — held an event at Babyn Yar, commemorating the 81st anniversary of the Nazi massacre of over 30,000 Jews there in 1941. The event symbolically tied Jewish suffering in Ukraine with the current war, drawing parallels between the Holocaust and Russia’s invasion. Several religious leaders, including Christian Orthodox and Catholic priests, stood alongside Azman.

Volodymyr Tylischak, deputy director of the Institute, told JTA that especially during the High Holidays, one can “sense the connection of Ukraine and the Jewish people,” and that he “believed that reconciliation is possible.”

The war also hasn’t derailed the work of the Sholom Aleichem Museum in Kyiv — the country’s only public Jewish museum that studies and preserves Jewish history in Ukraine — according to a researcher there who wished to remain anonymous over privacy concerns. Despite the war, the work of studying the Jewish community continues “as usual,” he said. 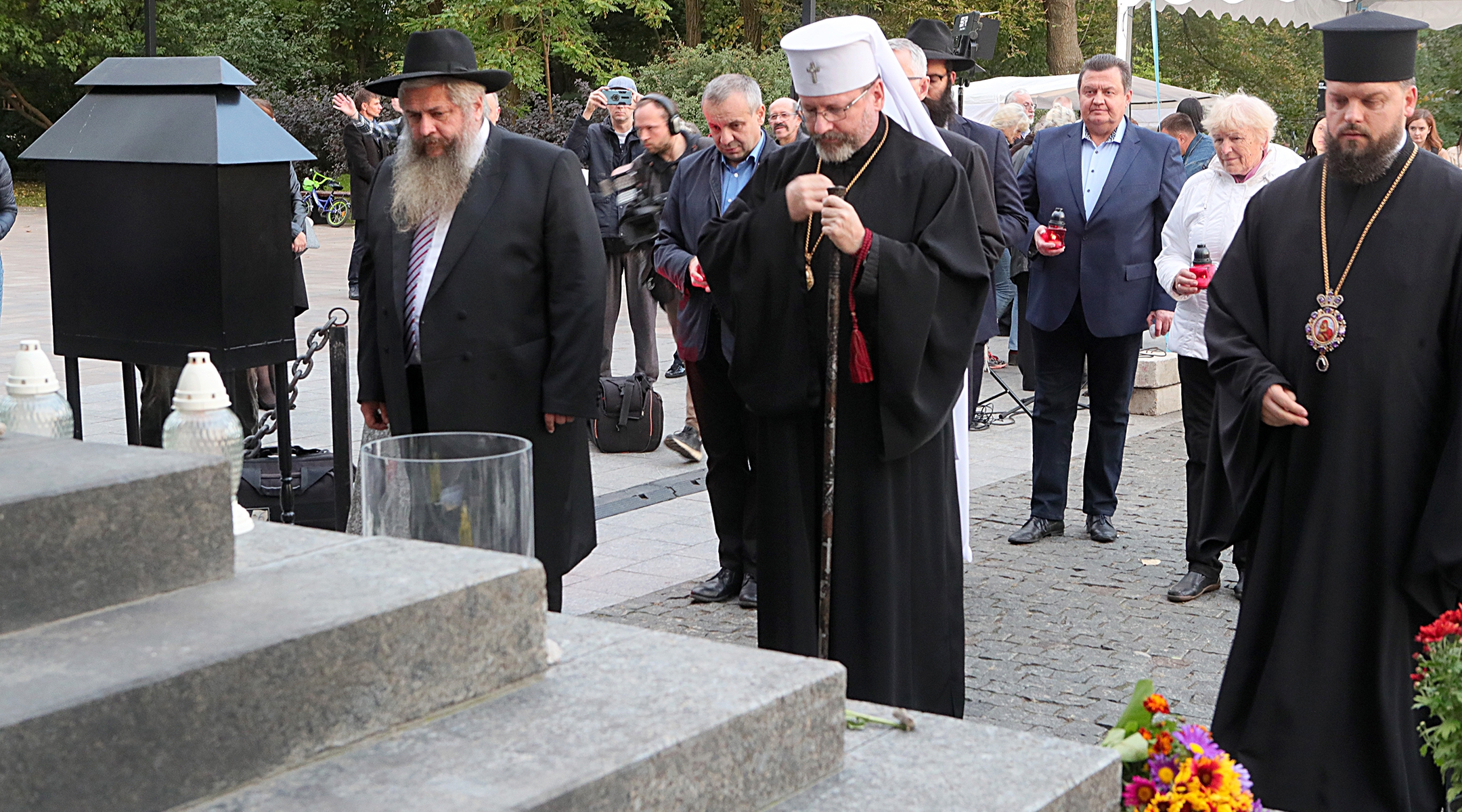 “Now we are all united, Jews and non-Jews, in fighting Russia,” he added.

There is one spot where Jewish rejoicing commenced almost as normal: Uman, the site of an annual Rosh Hashanah pilgrimage for thousands of Jews, most of them Orthodox, who travel to the gravesite of the 18th-century sage Rabbi Nachman of Breslov.

Although the estimated visitor total was down from highs of 40,000 to 50,000 in recent years, before the COVID-19 pandemic, some 25,000 braved the dangers of traveling into a warzone this year. They were met with heightened security measures and a curfew, among other new rules — which many flouted. 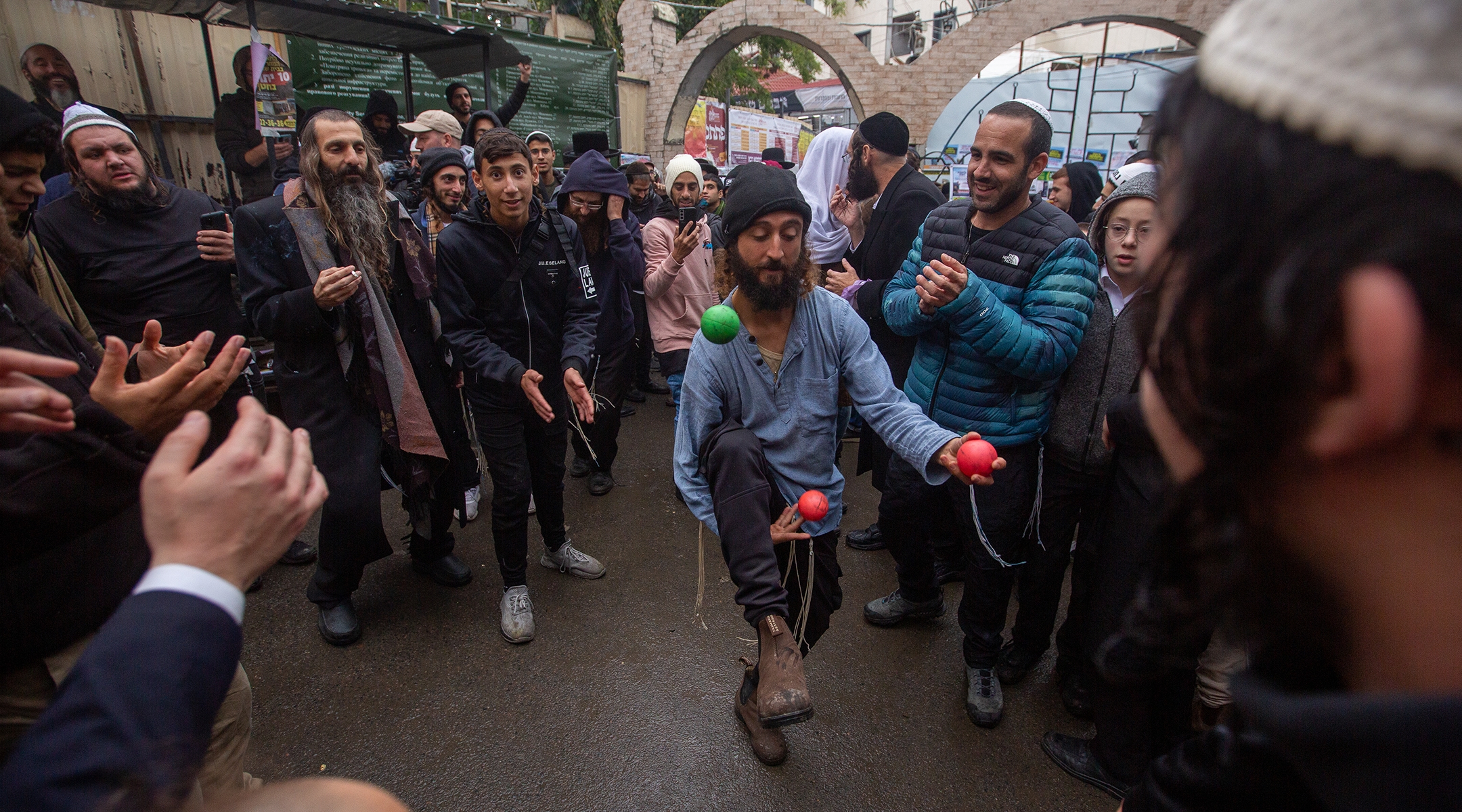 A scene from the Jewish celebration in the street in Uman, Sept. 25, 2022. (David Saveliev)

While Uman pilgrims are often stereotyped as haredi Orthodox followers of the Breslov Hasidic sect, the small town draws a diverse swath of Jewish visitors. Everyone finds something for themselves in Uman: For some, it is a place of quiet Hasidic learning. For others, like Jacob, a libertarian from Florida who did not give his last name, Uman is like a festival where there’s always music and dancing circles.

“This is the Jewish Woodstock,” Jacob told JTA.“I knew I gotta be here.”

Many pilgrims arrived weeks in advance, fearing that the borders would once again be shut like in the early days of the COVID pandemic. Since February, there have been no flights to Ukraine, so the Breslovers had to fly to neighboring countries, from where they took grueling and costly bus or taxi rides to Uman.

Benyamin, an Orthodox 39-year-old from upstate New York, said that he constantly felt like he was “in a dream” while in Uman. “It’s a country at war with a superpower, but I wasn’t scared,” he said. 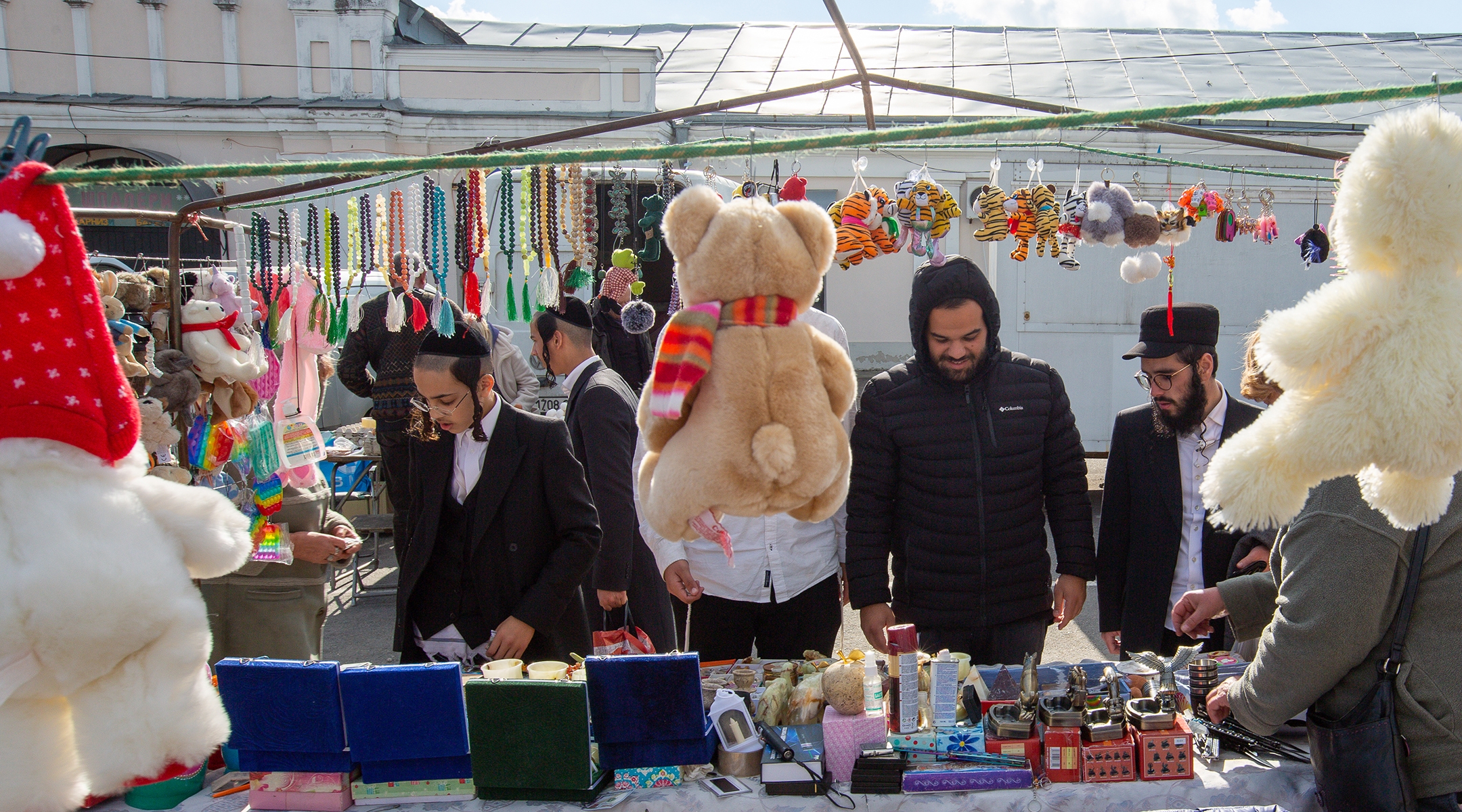 Tourists look for souvenirs at a bazaar in Uman. (David Saveliev)

When he arrived in Uman, Benyamin raised money by asking for tzedakah from friends and passersby, since he spent his savings on a plane ticket to Moldova. But as he told JTA, “the more trials and tribulations we go through to get to Uman, the greater is our achievement. I am so happy I spent my Rosh Hashanah here.”

For local officials, Rosh Hashanah is seen as a liability, especially in wartime.

“Every time Jews come, they bring bad weather — with their crying, their prayers — this is what they say in Uman,” said one of the five heavily armed Ukrainian guards at a checkpoint separating the Jewish quarter of Uman from the rest of the town. 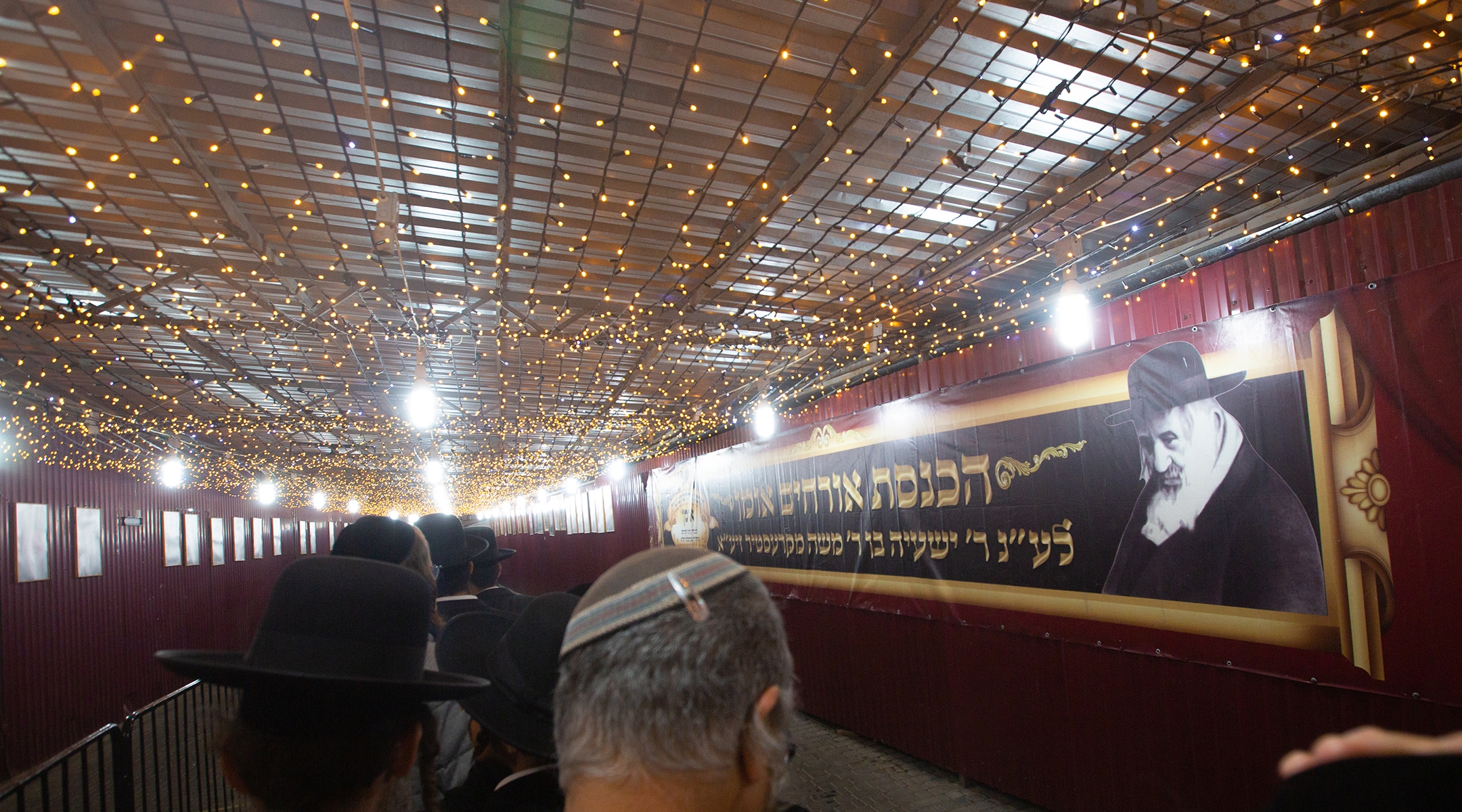 The city council is not too fond of the Jewish tourists, either.

“We get no help, only words, from Israel and elsewhere. We spend 2 million hryvnias [roughly $55,000] just on trash management every time the Breslovers come. We also have to pull hundreds of police from all over the region to contain them,” Deputy Mayor Oleh Hanich told JTA.

“Have you been to Israel? There is a war there. Here it’s nothing,” said Guy, a tall and dark Israeli who has been living in Uman with his daughter for years.

Over in Lviv, Tolok is trying to look for a bright spot in dark times. She feels that Ukrainian Jews are feeling a sense of solidarity that they haven’t felt in a long time.

“It felt more united than normal,” she said about Rosh Hashanah services. “This communal energy feels necessary especially now. Now that there is a war everything feels more sincere and warm.”