A year after the Mexico City earthquake, many Jewish organizations still don’t have a home 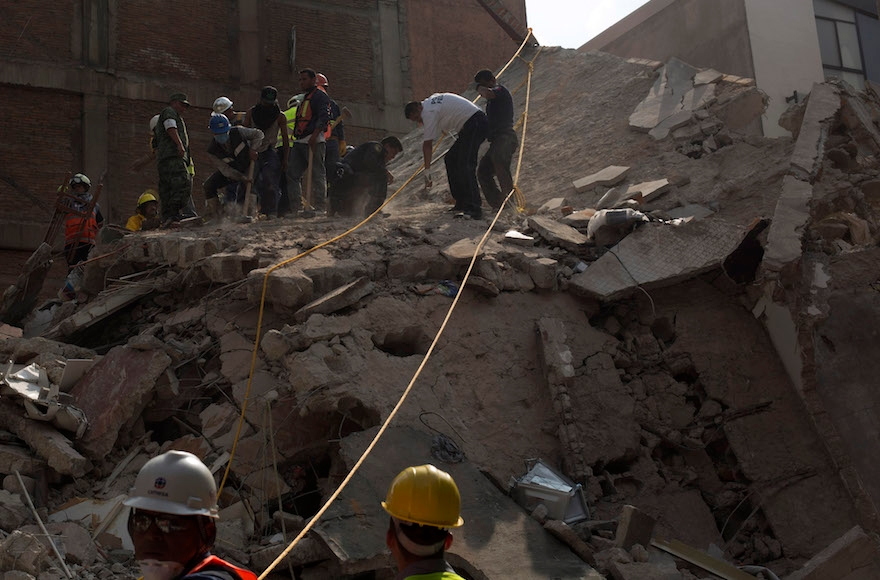 MEXICO CITY (JTA) — This capital city has yet to recover from last September’s earthquake, which killed over 300 people and left many more homeless. In the trendy Condesa neighborhood, once a predominantly Jewish area here, many buildings have been demolished and others are in a state of abandonment and disrepair.

Among the most affected structures is the cherished Nidje Israel Synagogue, known locally as “Acapulco 70″ for its street address. The massive building, used by generations of Jews — including my great-grandparents, grandparents and father — has suffered irreparable damage and most likely will be demolished.

But Acapulco 70 was much more than a synagogue: It served as the surrogate headquarters of the Ashkenazi community, hosted a kosher supermarket, kindergarten and small Holocaust museum. Inside also were the offices of the International Jewish Film Festival and the Ashkenazi Documentation Center, with its thousands of books, photographs and newspapers documenting 100 years of Jewish life in Mexico City.

“I was downstairs at the supermarket when it started to shake,” Enrique Chmelnik, director of the Ashkenazi Documentation Center, told me sitting inside his new temporary office provided by the Syrian Jewish community in the suburban neighborhood of Tecamachalco. “Up until today I still have this vivid image of an old man – I don’t know who it was — standing outside, crying at the sight of the building falling apart.”

Chmelnik was especially impressed that people were going into the building despite the quake, which fell on the same day as one in 1985 that killed thousands and left Condesa completely destroyed.

Since the catastrophe of 43 years ago, a nationwide drill is held in the morning on that date both to honor the dead and prepare for any earthquakes to come. During the simulation, Rabbi Tuvia Krawchic, whose offices were on the fourth floor of Acapulco 70, was told that he had to go down to the third floor and help with the “evacuation” of the kindergarten. 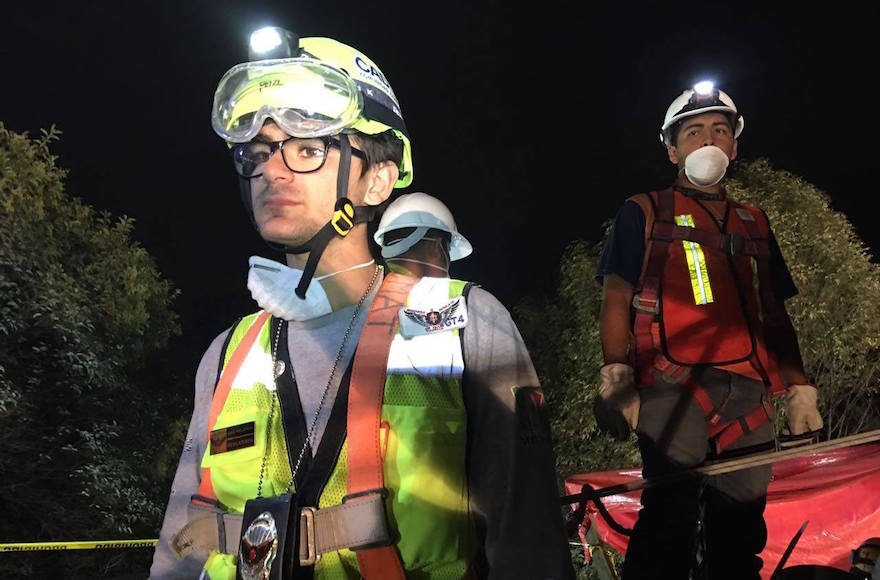 Two hours later, when the real quake struck, he knew what to do. Although Krawchic was at the exit when the floor started shaking, he turned around and made his way to the children on the floor below. There he met with Ricardo Silva, who worked on the sixth floor in the Kashrut Department and could not move because of the whip-like movement of the ground.

The earthquake was accompanied by a thick rumbling sound, but the most deafening of all noses was the tumbling of the gigantic metal screen that decorated the synagogue’s facade. The facade fell on top of a car, whose driver had the instinct to flee. No one was killed, but a woman coming out of the kosher supermarket was injured. She had to be hospitalized and eventually lost a finger.

Since the earthquake, the congregation that met at Acapulco 70 is dispersed and attending other synagogues that are part of the Ashkenazi community, including Agudat Ahim, Beth Itzaak and Ramat Shalom. The rabbi — who now works at the Agudat Ahim synagogue — and the film festival have found temporary homes. But others, like the Holocaust museum and the kosher supermarket, have not. The Kashrut Department relocated to an office in the nearby neighborhood of Lomas de Chapultepec, preserving its client database.

“We provide kashrut certification for over 500 clients,” Silva told me, “some of them a very big, like Jumex or Bimbo,” the food conglomerates. The kindergarten recently re-established itself in a new home — until a couple of months ago, the children were being sent to the Jewish recreation center.

The documentation center was preparing to move when the earthquake hit. A new Jewish documentation center — extending beyond the Ashkenazi experience to celebrate more than 100 years of Jewish immigration from Syria, Turkey, the Balkans, Morocco, Iraq and Eastern Europe — will open soon in the Roma neighborhood. The collection will have a library with 16,000 books in Spanish, French, Hebrew, Hungarian, Yiddish, Ladino, English, Lithuanian, Polish and Russian, many of them rescued by the Allies during World War II.

But the biggest transformation brought by the earthquake has been in the Jewish humanitarian agency Cadena, which has gone from providing first-response and disaster relief to managing reconstruction and economic empowerment programs across Mexico. After the quake, Cadena distributed essential goods and medicine, and deployed experts who specialize in rescuing victims from toppled structures. It quickly organized an international campaign to build temporary housing for those who lost their homes in Oaxaca and Chiapas.

“We have never done anything like this,” Benjamin Laniado, the CEO of Cadena told JTA  in an interview, “but the earthquake has helped us gain visibility and extend programs that will help build resiliency throughout the country.”

I visited Miguel Hidalgo, a remote town of 2,000 located on the slope of an idyllic mountain range, as part of volunteer work for Cadena. Immediately after the 2017 quake, as well as one that struck there about two weeks earlier, the state had promised up to $6,000 per person to those whose houses had been destroyed, yet the funds have not arrived. In the meantime, the clay huts in this enclave of poverty (reachable only by a long and winding dirt road a two-hour’drive from Mexico City) are falling apart. Residents are worried that the next earthquake will be their last.

Two months after the earthquake, Cadena was among the few NGOs to receive a badge of recognition from Mexico’s president, Enrique Peña Nieto, recognizing their labor during the disaster. But there is still work to be done.

“In Third World countries like Mexico,” Laniado said, “civic society needs to go step in and fill in the void. “

The post A year after the Mexico City earthquake, many Jewish organizations still don’t have a home appeared first on Jewish Telegraphic Agency.