(JTA) — For most of her adult life, Rachel Riley was only vaguely aware of her Jewish ancestry.

A moderately famous daytime game show television host, Riley, 33, is one of countless unaffiliated Jews in the United Kingdom — a country with 250,000 Jewish citizens and where synagogue attendance is at a historic low.

“When I was a kid my mum would give us pepperoni pizza,” she told The Times of London in an interview published Saturday, pointing out that she didn’t keep kosher.

On Hanukkah, she added, “We’d light the menorah candles but we didn’t go to synagogue and I’ve never done Friday night [Shabbat].”

But after experiencing anti-Semitic abuse online for criticizing Britain’s liberal Labour party — whose far-left leader Jeremy Corbyn has been called anti-Semitic for his rhetoric and anti-Israel views — Riley was compelled to speak out, including in parliament last week, against the proliferation of that hatred and about how it has affected her own family.

“My family came over in the pogroms. For centuries Jews have been persecuted and kicked out of countries,” she said in the Times interview.

Riley’s revisiting of her Jewish identity is part of a larger process that is creating “an unparalleled unity and sense of solidarity amongst Jews of all persuasions” in the United Kingdom, the London-based Campaign Against Antisemitism watchdog group told JTA.

The crisis generating this sense of unity centers on the 2015 election of Corbyn to head Labour. Thousands of his followers joined Labour for him, creating a toxic atmosphere for Jews and thousands of cases of hate speech against Jews in the party’s ranks.

Last year, Margaret Hodge, a veteran Labour lawmaker in the upper house of the British parliament, was probed by her own party over her criticism of Corbyn’s anti-Semitism problem. She said the party’s decision made her think of what it felt like to be a Jew in Germany in the 1930s.

It was a highly unusual statement from a person so unaffiliated that many British Jews didn’t even know she was Jewish. 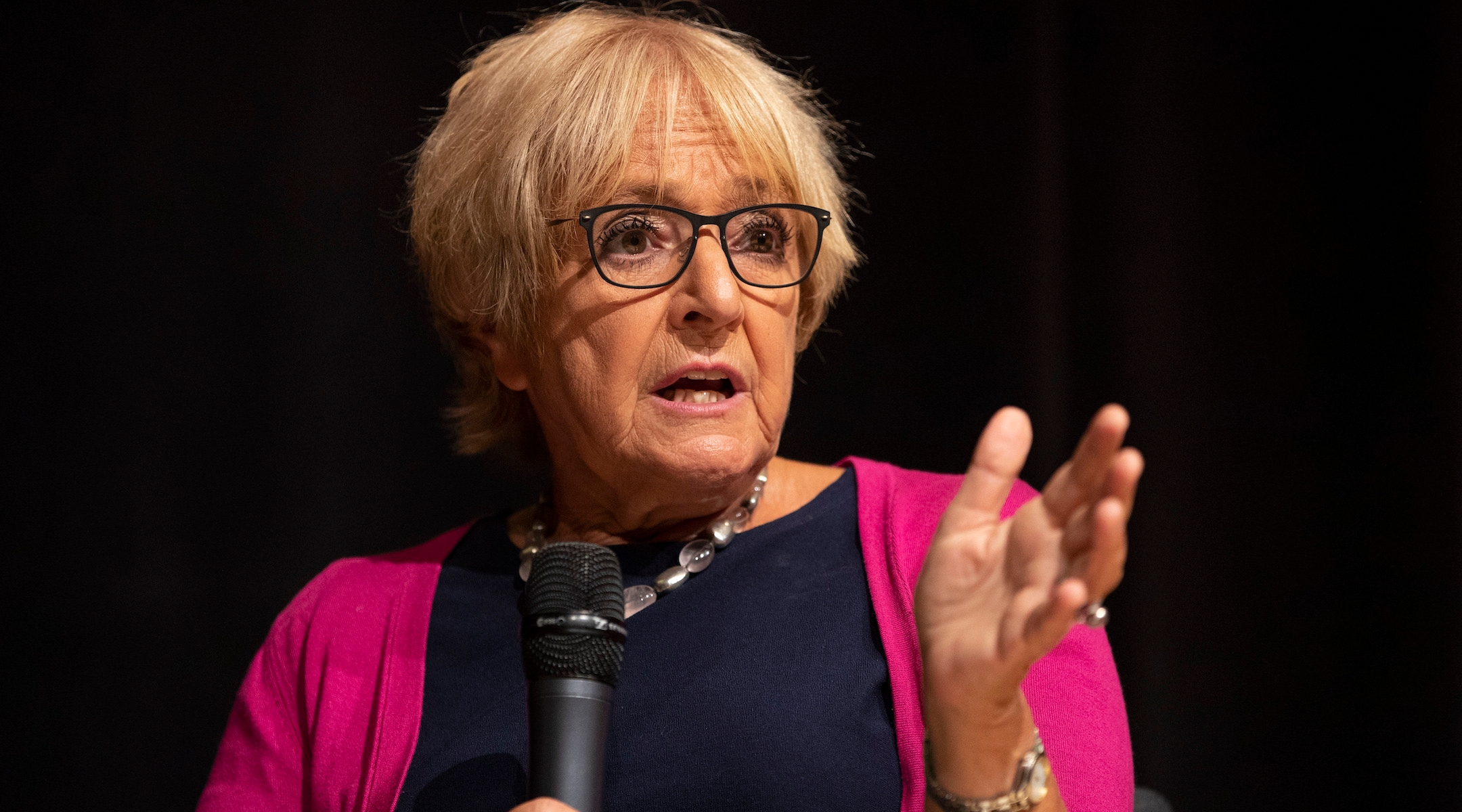 “I have never been active in the Jewish community; my two marriages were to non-Jews,” she wrote in an Op-Ed for the Guardian in July. But, she added, “I am a Jew.”

Hodge’s mobilization against anti-Semitism is not entirely unexpected — she wrote in the Guardian piece that she had joined Labour in the 1960s to fight racism.

But Riley’s statements are less predictable. Before she began speaking out against anti-Semitism last fall, she was best known as one of the hosts of Channel 4’s long-running puzzle show “Countdown.” Tabloids often focus on her eye-catching dresses — including a metallic silver mini she wore to a Nov. 2018 gala. Her other claim to fame was her ability to solve math puzzles.

Few Brits knew that Riley, a blue-eyed blonde, is Jewish.

That began to change in September, when she took to Twitter to express her concerns about billboards that had been illegally placed across London reading, “Israel is a racist endeavor.”

The signs, part of a war of words and billboards between Corbyn supporters and his critics, were over Corbyn’s objection to Labour adopting a definition of anti-Semitism that includes anti-Israel sentiment.

But as soon as Riley spoke about them, she exposed herself to anti-Semitic abuse online, she said.

Her Twitter account — usually full of requests from school girls asking for help with math problems — was inundated with racist and other insults by people she says are Corbyn fans.

She also got physical threats, leading her studio to increase security for her show.

During the same speech, she said that had someone told her a year ago that she’d be commemorating the Holocaust in parliament, “I wouldn’t know where to begin with my incredulity.” 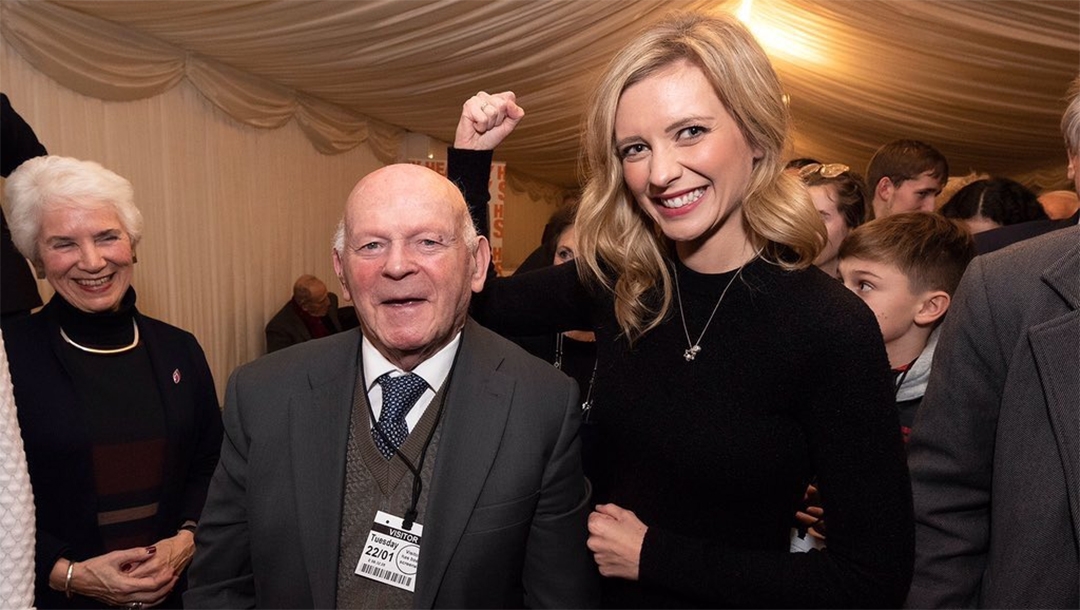 Rachel Riley at a Holocaust commemoration even in London, Jan. 22, 2019. (Courtesy of Riley)

Historically speaking, the galvanizing effect that anti-Semitism can have on some Jews’ sense of Jewish identity “is neither surprising nor unusual,” Keith Kahn-Harris, a London-based sociologist and writer, told JTA. “It often takes violent, crude anti-Semitism to make people discover what you might call ‘latent Jewishness.’”

In that sense, Riley’s experiences and reaction to them are part of how “anti-Semitism in the United Kingdom has gone from being a containable issue to a major public issue.”

The proliferation of anti-Semitism in Britain can be measured in the number of incidents reported (last year had 1,382 of them — an all-time record). It’s reflected in British media, which from 2016 on began devoting unprecedented levels of attention to the issue.

Much of the debate centers on the role of Corbyn, who in 2013 defended an anti-Semitic mural in London (he later expressed regret for that). In 2009 he called the terrorist groups Hezbollah and Hamas his “friends,” adding that the latter Gaza-based group is “dedicated towards the good of the Palestinian people and bringing about long-term peace and social justice.”

He has laid a wreath at a monument for the killers of Israeli athletes at the 1972 Munich Olympics and said in 2015 that “Zionists” who have “lived in this country for a very long time, probably all their lives,” don’t “understand English irony.”

Against this backdrop, even British Jews who rarely speak about politics in the Middle East or elsewhere find themselves under attack online.

On Monday, another Jewish celebrity, “Game of Thrones” actress Laura Pradelska, told the BBC she turned off the comment option on her Instagram account because of anti-Semitic abuse that’s “mostly to do with Israel,” although she hardly ever posts about that country.

The leaders of the U.K.’s Jewish community prefer low-profile action. But the previous chief rabbi of Britain, Jonathan Sacks, has called Corbyn an anti-Semite — an accusation Corbyn has denied, adding he is determined to fight anti-Semitism in Labour and beyond. Last year, Britain’s three leading Jewish newspapers united in publishing a front-page editorial warning that a Corbyn premiership would constitute an “existential threat to Jewish life in this country.”

The events have even rallied unaffiliated Jews who have not experienced abuse themselves.

“I usually avoid politics but Corbyn is making the Jews feel really bad,” a Belgium-born Jewish woman from north London, who requested to remain anonymous, told JTA. It made her for the first time in her life join a protest against anti-Semitism last year outside parliament.

To her, the debate on anti-Semitism in Britain is catching up with local Jews who “did not suffer as much as other European Jews,” she added, because Britain was never occupied by the Nazis.

Murray Lee, an unaffiliated Jewish real-estate agent from London, said that Britain’s anti-Semitism problem “saddens” him primarily as a Brit, not necessarily as a Jew.

Asked whether the problem makes him think of his ancestors, Murray, who is a third-generation U.K.-born Jew, said: “It’s very hard to say no to that, but in principle, my ancestors are pretty much British.”