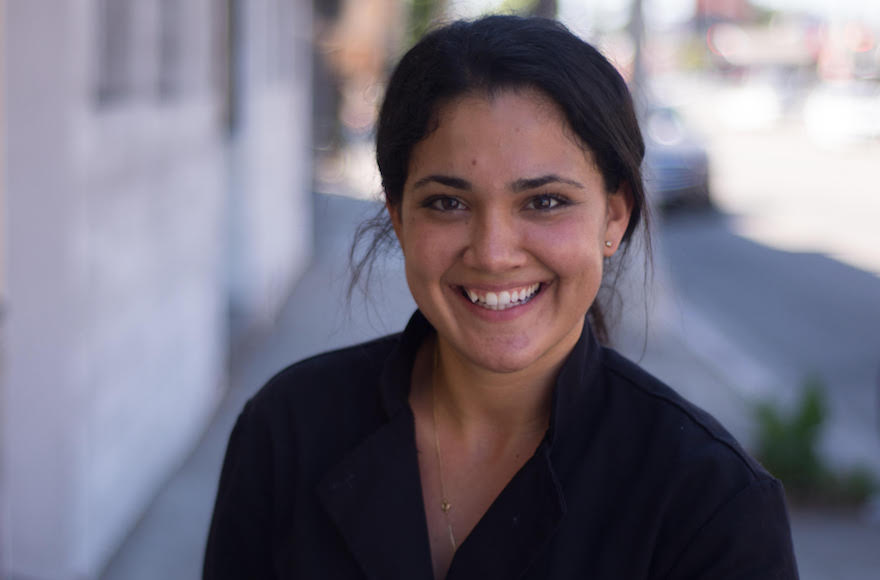 Deborah Benaim is creating a cookbook to showcase her family’s food, which has influences from Morocco, Spain, Moldova and Venezuela. (Courtesy of Benaim)

(JTA) — Food has always been a way for Deborah Benaim’s family to connect to its roots. A typical Shabbat dinner featured dishes such as traditional Ashkenazi braided challah bread, Moroccan-style whitefish with red pepper paste and a Venezuelan hearts of palm salad.

“I think it’s in my blood,” said the Caracas-born chef, whose grandparents moved to Venezuela from Morocco, Spain and Moldova.

When she was 4, her family moved to the United States, escaping political instability at home. In her new home in Dallas, Benaim found that she, too, could use food as a way to remember the past.

“I think it was my way — if I psychoanalyze myself — of trying to stay attached to my family: Maybe if I cook their recipes I’m still holding on to that life that I had,” Benaim, 30, told JTA last week.

Benaim, who has appeared several times on the NBC cooking show “Food Fighters,” is working on a cookbook that will showcase her family’s unique recipes. She also finds non-food related ways to educate about the history of Latin American Jews.

She is one of the writers of “Chutzpah & Salsa,” a show that premiered in 2016 and was performed for a second time last week at the Jewish Women’s Theater in Santa Monica, California. It features actors telling the stories of Jewish immigrants from Latin America, including Benaim and her Panama-born husband Ariel Lipski.

Throughout her life, she has found that few American Jews are even aware of the existence of Latin American Jews. Though the family was involved in the Jewish community in Dallas, Benaim said she felt lonely as one of the few Sephardim at her day school.

“If I had a nickel for every time that someone said ‘Omigosh, you’re Latin and Jewish? How is that possible?’” she joked.

Benaim’s story, performed by Marnina Schon during “Chutzpah & Salsa,” is about an experience she had in 2015 while visiting her sister in New York. The two were in a hardware store, and Benaim said its smell reminded her of her grandfather’s shop in Caracas, flooding her with memories.

Later she found out that the day she visited the store was the anniversary of her grandfather’s death, or yahrtzeit.

The incident had a deep impact on Benaim, including in her cooking.

“This experience reignited that spark to cook with a newfound purpose or newfound inspiration,” she said. “It’s not just let me cater this event. It’s how do I make this experience jog someone’s memory?’”

Though Benaim could be found in the kitchen throughout her childhood, it wasn’t until college that she realized she wanted to pursue the hobby for a living. She transferred from the University of Maryland, where she was studying psychology, to the Conrad N. Hilton College of Hotel and Restaurant Management at the University of Houston. After graduating, she found a job at Spago, celebrity chef Wolfgang Puck’s flagship restaurant in Beverly Hills.

Through side projects, she also found ways to honor her family history. Last year she teamed up with the Jewish National Fund to create a kosher Latin food truck at the annual SXSW media festival. Serving dishes such as traditional arepas and fried plantains, as well as an Israel-inspired arepa with cilantro hummus, the food truck was a hit and even sold out at lunch some days.

Last year, Benaim relocated to Dallas with her husband to focus on her cookbook. She also does catering and cooks a variety of cuisines. But she says whether or not she makes a dish that is inspired by her heritage, the Latin flavor comes through.

“I may not specifically make any Latin or Jewish recipes for an event,” she said, “but when you sit down and talk about inspiration it obviously comes out. I think it’s just embedded, ingrained, whether I want to or not — and I do want to.”