A new Jewish Christmas tradition: Watching ‘Fiddler on the Roof’ at your local movie theater

LOS ANGELES (JTA) — Sick of eating Chinese food and taking in another modern blockbuster on Christmas, while your Christian friends party together with sweets and eggnog?

Thanks to the imagination of Greg Laemmle, co-owner of a chain of eight art house cinemas bearing his family name in greater Los Angeles, Jews in that city have another festive option: watching and singing along with the classic “Fiddler on the Roof” movie at local theaters on Christmas Eve, alongside fellow Jews dressed as their favorite characters from the fictional Anatevka.

The Laemmle theaters, which are spread out across L.A., will hold “Fiddler” costume contests. At each venue, a host or hostess, often from the showbiz world, is tasked with keeping the energy level high by leading audience members in song. They then quiz audience members on “Fiddler” history and lore after the film.

This year will be the eleventh straight Christmas Eve of “Fiddler” showings at Laemmle theaters. It has become, in “Fiddler” parlance, tradition.

The idea for the show came to Laemmle a dozen years ago, when he attended a live performance of “The Sound of Music” at the outdoor Hollywood Bowl, where the audience sang along loudly. 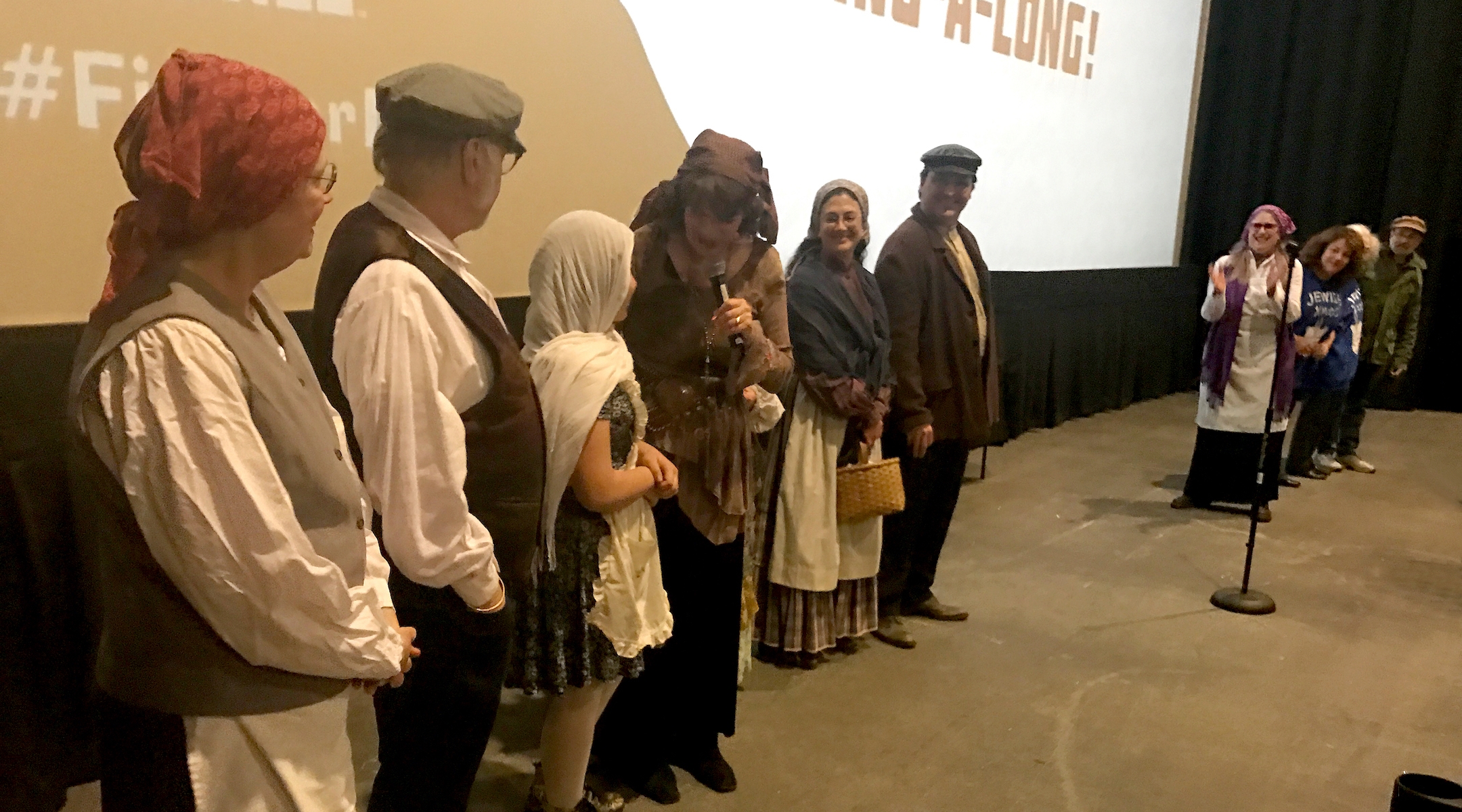 Participants at a Laemmle theater dressed up as “Fiddler on the Roof” characters. (Courtesy of Laemmle.com)

In a news release, he urged patrons not to hold back at the showings.

“Now is your chance to be the star of the shtetl,” Laemmle said. “Sing your heart out along [with] Topol and other screen legends. And it’s ok if you haven’t memorized all the songs. We provide the lyrics.”

The success of the Los Angeles format has bred imitations over time, in Chicago and Seattle. In Chicago, the storied Music Box theater will screen “Fiddler” on Christmas Day this year. Last year, Chicago had a full show on the 24th, with the similar bells and whistles seen in L.A., and it expects to reinstate the full tradition next year.

In Seattle, Beth Barrett, artistic director of the Seattle International Film Festival, is putting her own touches on the Christmas Day program. Barrett will introduce the film with live klezmer music by the local Orkestyr Farfeleh, and patrons will feast on kosher Chinese food. 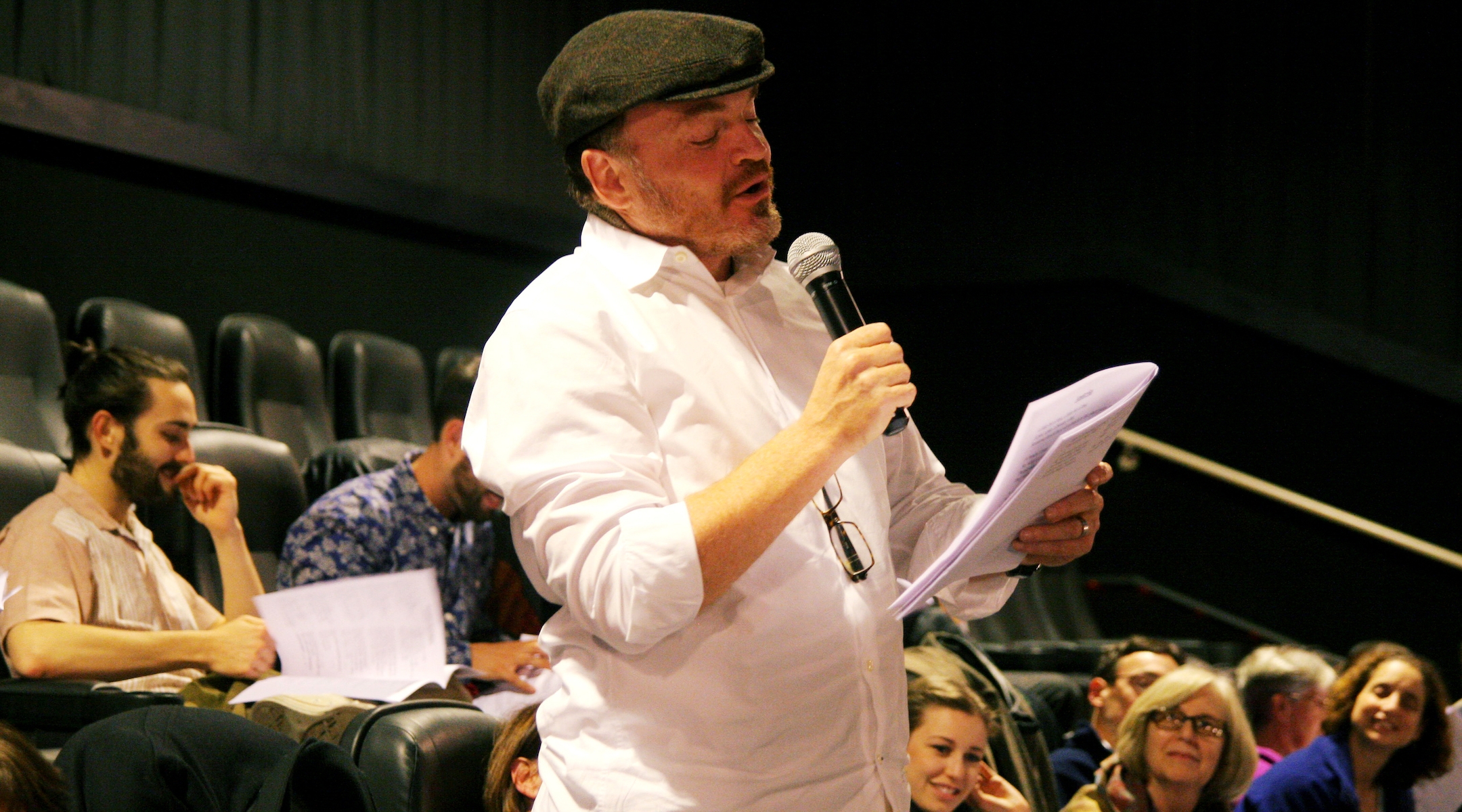 A participant joins in a “Fiddler” reading at the Royal Theater in West Los Angeles, part of the Laemmle chain. (Courtesy of Laemmle.com)

“What I found most extraordinary was how people knew every word of every song in the movie,” Naomi Ackerman, a past hostess of the event at the Laemmle theaters, wrote in an email to JTA. “Not to mention that people were fighting over who would answer the trivia questions. How amazing that people knew so many little tidbits and information about the production. It was a warm and haimish evening and we felt like we recreated Anatevka, with all its goodness, at the Laemmle theater.”

Greg Laemmle didn’t mention whether or not he was also inspired by “The Rocky Horror Picture Show,” the 1975 cult film that spawned its own tradition of midnight showings across the country, complete with sing-alongs and costumed audience members. In a testament to its perennial appeal, “Fiddler” is currently on a national tour that follows its fifth successful Broadway revival. A Yiddish language production in New York is a critical and box office success.

For some older immigrant Jews — depending on their backgrounds and family histories memories, but especially those from the Pale of Settlement, where “Fiddler” is set — the Christmas season can conjure frightening memories.

“My grandmother was born in Czarist Russia, and even after she came to America she used to tense up and become fearful with the approach of Christmas,” Laemmle recalled. “That usually was when the pogroms swept across the old country.” 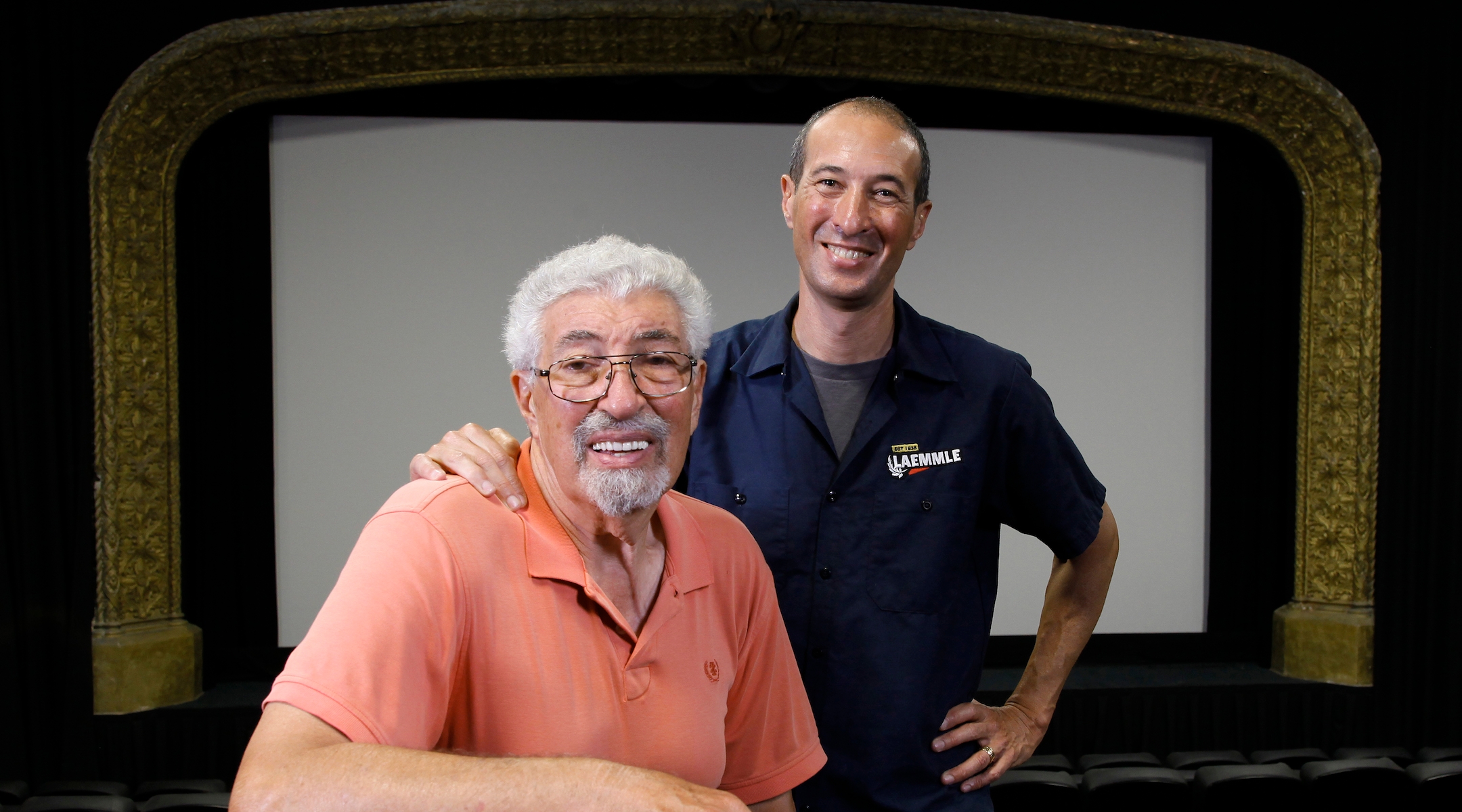 In 1935, Greg Laemmle’s grandfather Max got a letter in Germany from his brother Kurt, urging him to flee the Nazis to the United States. Their cousin Carl Laemmle had founded a little company called Universal Studios there.

Max took Kurt’s advice, and the brothers opened the Laemmle chain together in 1938. Some 80 years later, the theaters remain some of the most respected art house venues in Los Angeles.

A noticeable phenomenon over the past few years of the event — at the Laemmle theaters, at least — is the participation of people of other faiths, in some instances representing about half of the audience.

However, the emphasis remains on Yiddishkeit, Laemmle said.

“When Christmas occurs during the Hanukkah period, we display a lighted menorah in the lobby, and when it coincides with Shabbat, we say the blessings over the wine and challah,” he noted.

Nevertheless: “We make sure that our Christmas Eve show ends well before 12 o’clock,” Laemmle added, tongue in cheek. “That way, patrons who wish to do so can walk to a nearby church and attend Midnight Mass.”

As they say, “Only in America.”