WASHINGTON (JTA) — A decades-old memo unveiled by the National Archives on Tuesday shows that Tony Blinken, President-elect Joe Biden’s nominee for secretary of state, knows when Hanukkah humor is good, and when it’s as undercooked as a raw latke.

The Archives is posting documents relating to the celebration of Hanukkah every day of the holiday this year. Tuesday’s selection included portions of a 1998 memo from Jacob Maor, an adviser to then-Israeli Prime Minister Benjamin Netanyahu (in his first term), to Blinken, who was then a White House adviser to President Bill Clinton.

The memo is full of Hanukkah jokes, which Maor suggested Clinton say in a public speech he was due to make during a visit to Israel during the holiday. Clinton’s relationship with Netanyahu was tense over the Israeli leader’s settlement policy and Netanyahu’s courting of Clinton’s most virulent U.S. political enemies. The jokes would resonate the way Clinton’s farewell eulogy in 1995 for assassinated Prime Minister Yitzhak Rabin would, Maor said. Clinton had said in Hebrew, “Shalom, Haver,” or “Farewell, Friend.”

“I suggest you’ll end the president’s speech with those words. It might have an effect like you did with the words ‘Shalom Haver’. Great impact,” he wrote.

According to the declassified memo, which begins with “as per your request,” Blinken, who is Jewish, solicited the advice.

But the jokes Maor includes either fall flat or defy comprehension.

One joke goes, “I know a restaurant in America where they had a bigger miracle than your Hanukah miracle. According to the color of the oil in their frying pan (skillet?), I know their oil is good for 8 weeks, not only 8 days.”

Maor parenthetically advises, “A good joke for a dinner. If you say it for a falafel stand, it’ll be even better.”

Maor apparently hoped Clinton was bringing gifts with him. “If the president wants to declare ‘presents’ for Israel, he’d better use the term ‘Hanukah gelt’ or ‘Hanukah money’. These terms are used for traditional gifts in Hanukah, like your tradition of Christmas gifts.”

He continued: “He’d better say like: ‘Uncle Sam came to visit you in Hanukah, and is bringing you some Hanukah money’.”

Maor also advised Clinton to make a pun on the peace talks just concluded at the Wye River Plantation in Maryland by referencing the weekly Torah reading, or parsha, that was to coincide with Clinton’s visit.

“Rabbis are usually finding actualization to everything in the Torah or the Bible nowadays,” he suggested Clinton say. “We can find a hint or a clue even on your current Parsha you read in Torah. The name is WYE-eshev. How interesting.”

Maor added:  “This humor will be highly appreciated by Jewish people.” 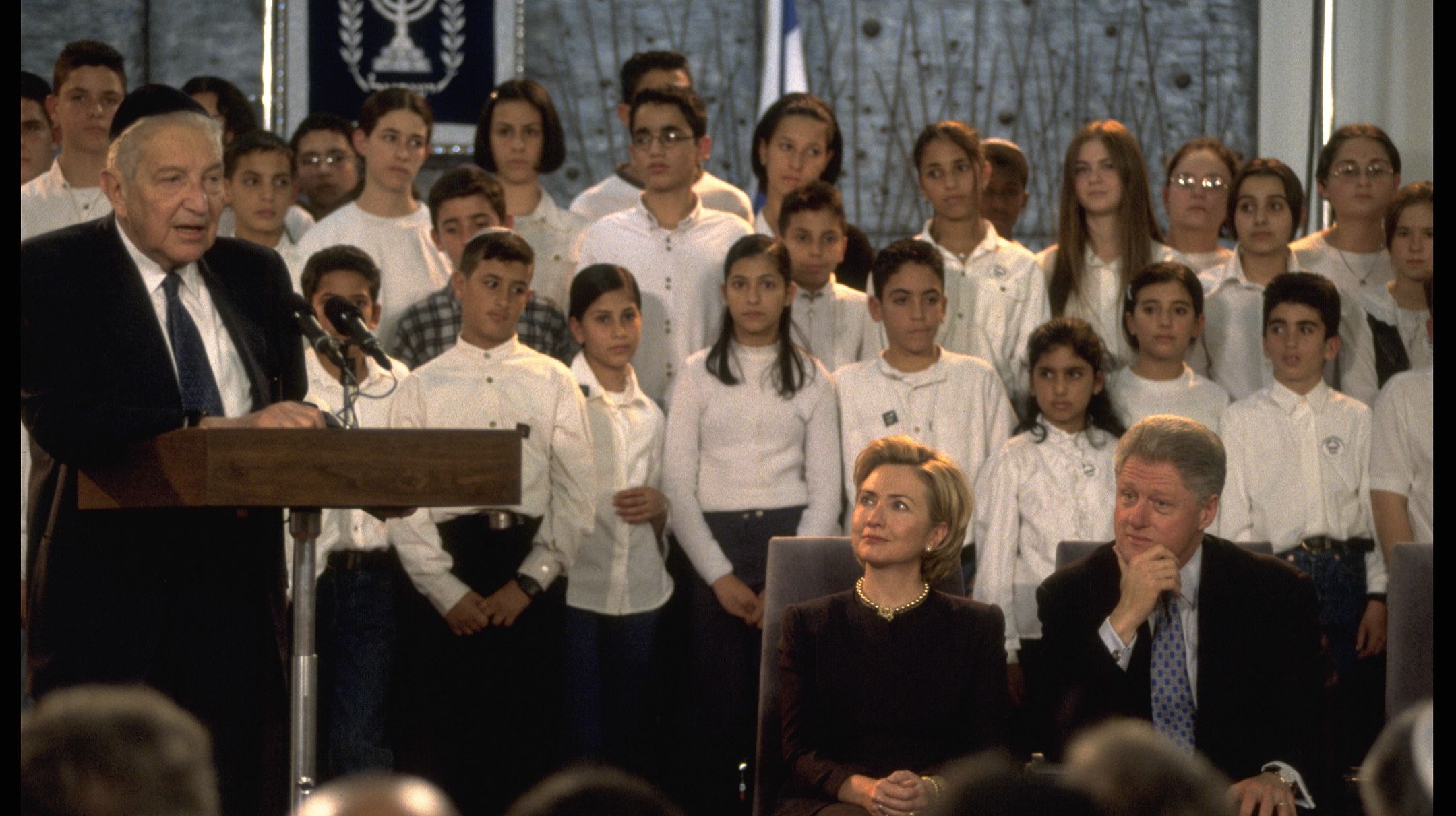 U.S. President Bill Clinton, seated right, listens as Israeli President Ezer Weizman speaks on the first night of Hanukkah at the president’s residence in Jerusalem on Dec. 13, 1998. Neither man made a joke about falafel. (Ira Wyman/Sygma via Getty Images)

Maor’s jokes did not see the light of day, and the record does not show whether they ever got beyond Blinken’s desk. Clinton celebrated Hanukkah that year at the official home of Israel’s then-president, Ezer Weizman, by lighting a menorah. There was humor at the event, but of the gentle, generous kind, for which Clinton was known, at least in his public life. A children’s choir performed, and one of the children helped light the menorah.

“I congratulate this young man for holding the candle all that time and not burning himself,” Clinton said.

The National Archives staffer who authored the post calls the document “fascinating” and added that Clinton’s 1998 Hanukkah greeting was made “in contrast to the tone of these suggestions.”

“This festival of lights is a reminder to all of us of the many blessings that brighten our lives: the love of God, the gift of freedom, the strength of family and community, and the hope of lasting peace,” Clinton said then.

In addition to the Maor-Blinken memo, the Archives has also released a 1956 patent application for a menorah featuring “cowboys, horses, tassels, and what may be mistletoe”. Also included is the mention of Hanukkah in the Grand Jury testimony that led to the indictment, trial and execution of accused spies Ethel and Julius Rosenberg, and an account of a 1918 Hanukkah held by Jewish soldiers in the midst of that year’s pandemic, and in the last days of World War I.