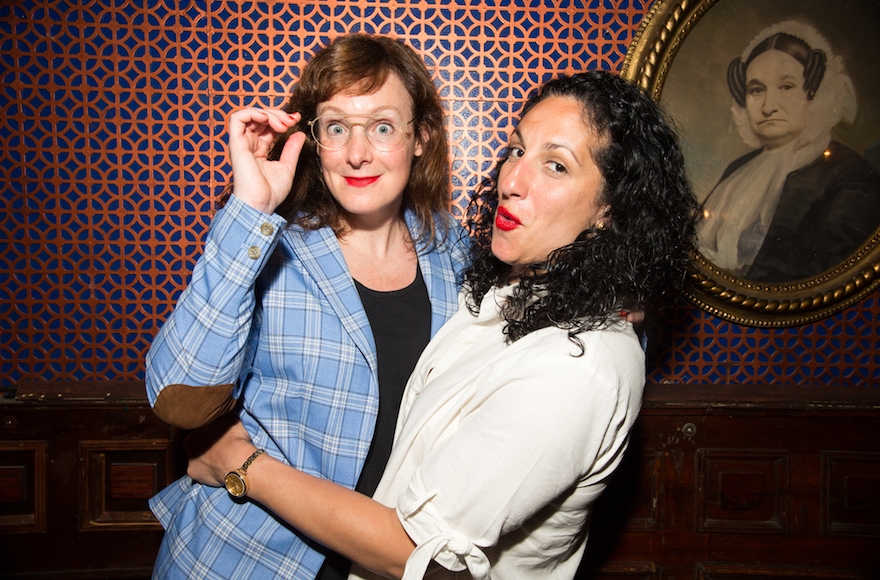 NEW YORK (JTA) — Eman El-Husseini and Jess Salomon have a few people to thank for their marriage — including a drunk Italian guy at a comedy club and Saddam Hussein.

Salomon is a Jew from Canada. El-Husseini is the daughter of a Palestinian family that fled her birth country of Kuwait in 1991, when she was a child, after Hussein’s Iraqi army invaded the country.

“Sometimes I like to give Saddam Hussein a shout-out for invading Kuwait because if not for that, this one’s family might not have ended up in Montreal, and we might not have ever met.” Salomon says.

“So Saddam Hussein is a big part of our relationship,” El-Husseini interjects.

“I mentioned him at the wedding in my speech,” Salomon responds, “and nobody liked it.”

Now the two comics are in calmer environs: sitting at a tiny table in a trendy coffee and matcha place in Brooklyn, where they have lived since 2015. Like legions of comedians, they have come to New York City to make it big.

There is one thing, however, that sets them apart: Not many two-person comedy acts can credibly say they are a lesbian Palestinian-Jewish married couple.

“It’s the only conflict you can bring up where everyone knows the reference,” Salomon said. “Even if you’re in the middle of nowhere America, if I say I’m Jewish and my wife is Palestinian, people are like ‘Ooooh …’”

The couple took different paths to comedy and have different styles: El-Husseini is louder, Salomon drier. But they are parlaying their marriage into a joint career. They have appeared together several times and are collaborating on a webcomic about their relationship. Called “The El-Salomons,” the comic is being drawn by the London artist Jesse Brown. 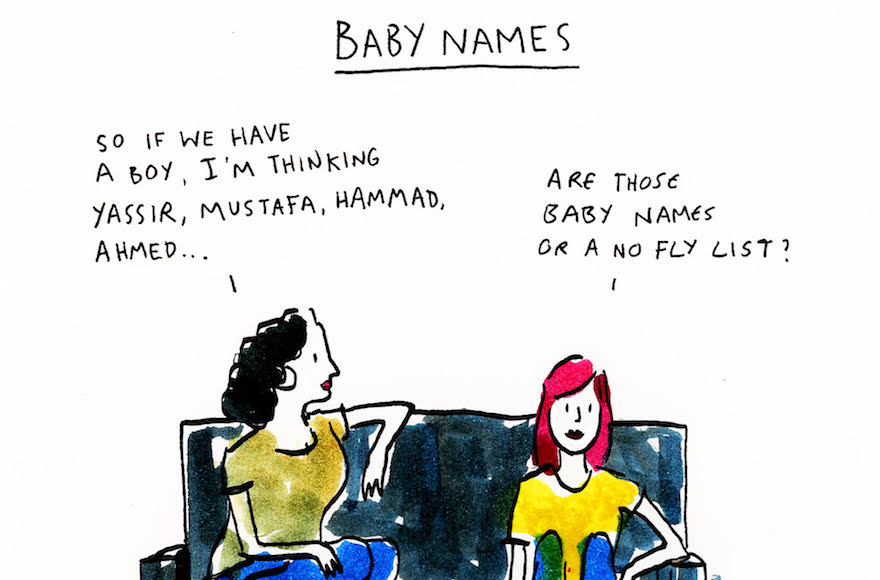 In one cartoon, El-Husseini encounters Christian missionaries and scares them away just by describing herself: “I’m Muslim … and gay… and my wife is Jewish,” she says.

“Have a nice day,” the missionaries respond.

In another, El-Husseini has to decline a bunch of stand-up gigs because it’s Yom Kippur. (“You know this used to be my showbiz night of the year,” she says. “I’m sorry,” Salomon says.)

The couple hope to turn the comic into an animated sitcom.

“We can voice it, and it doesn’t matter how old or fat we get,” El-Husseini says.

El-Husseini says that club owners used to tell her not to talk about her identity. But a few years ago, while she was bombing onstage on the anniversary of the 9/11 attacks, she told the crowd it was her parents’ wedding anniversary (which is true). They went wild.

“There’s always resistance — don’t talk about women’s issues, don’t talk about being Arab, don’t talk about your identity,” she says. But after telling the 9/11 joke, “I got the biggest reaction of my career at that point and I’m like, ‘Oh my god, people want me to talk about this.’ It made me so happy because it’s, like, what I know.”

Stand-up comedy was a natural fit for El-Husseini, who lived in Canada from 1991 until 2015. She was never interested in school, and couldn’t sing or dance, but could tell jokes. She remembers renting the entire stand-up comedy section of Blockbuster Video. And she sees comedy as a great way to give Palestinian and Muslim women more representation. She’s been a comedian for 12 years.

“I realized when I was younger that being funny is a powerful tool, and you can really get away with a lot,” El-Husseini says. (“Being funny or being hot,” Salomon interjects.) “If you’re able to make people laugh, it really goes a long way. And for being Palestinian — it’s such a controversial thing in North America. Especially earlier, saying you’re Palestinian is like, gasp.”

El-Husseini has also done a couple of comedy tours in Palestinian cities in the West Bank and Israel. She enjoys being there and says she feels people there are always intense — whether they’re really happy or really angry.

“When Eman and I first started doing this, there weren’t a lot of Arab women doing comedy,” says Maysoon Zayid, a Palestinian-American comic who toured with El-Husseini. “Eman is a brilliant, brilliant comedian who works tirelessly, but she didn’t really find her voice until she found Jess. … Eman and Jess are the premise of every single joke, right? That’s a tough one to write, so the fact that it’s her truth is so much fun to me.”

Salomon began her career as a lawyer working at the Canadian Justice Ministry under Minister Irwin Cotler, then for a war crimes tribunal in the Hague. That’s where she got into comedy. Her workplace was full of gallows humor, and she would blow off steam by watching Jon Stewart on “The Daily Show,” which made her appreciate the power of satire.

She decided to take off a couple years and return to Montreal for a shot at stand-up. That was nearly a decade ago. 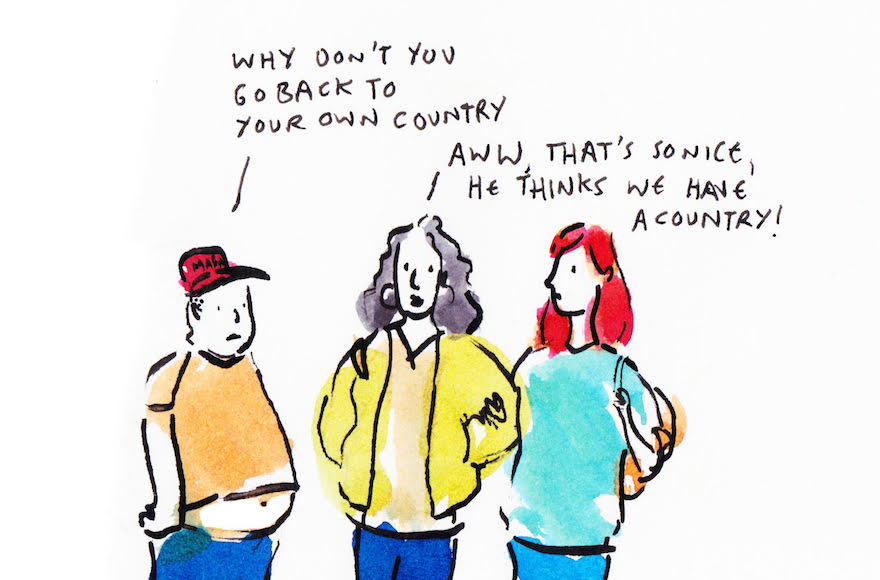 (Courtesy of Salomon and El-Husseini)

“Everybody was so funny there,” she recalls of the Hague office. “It’s sort of like how surgeons have a lot of dark jokes about the hospital. I started to see my workplace as a comedy. I like the idea of a sitcom that took place in a war crimes tribunal. So I’m trying to do that.”

The two met at an English-language comedy club in Montreal where comics would hang out and drink after their sets. El-Husseini also ran a Jewish-Muslim comedy show at Christmastime called “Kosher Jokes for the Halalidays,” and invited Salomon to perform. In their circles, they say, Muslim and Jewish comics would always gravitate toward each other.

“When Jess came to the comedy scene, I was convinced she was a Mossad agent,” El-Husseini says. “Who leaves law to become a comedian? She’s coming to ruin my career, I know it.”

At the time, El-Husseini didn’t identify as a lesbian, so they were friends for a couple of years before anything happened. Then a drunk friend of theirs propositioned both of them at once. And the romance began.

The couple married in 2015. They occasionally run into tension at any number of Jewish holiday gatherings and face down hecklers onstage. El-Husseini will sometimes get pro-Israel audience members calling her out at shows.

But by and large, they say, people are fine with them. And when they’re not, the couple can always turn it into a joke.

“And gay and show so much cleavage and be drinking a beer,” Salomon replies. “So many vices.”

El-Husseini chuckles. “My whole life is a sin.”

The post A married lesbian Palestinian-Jewish couple aims to break stereotypes — and make it big in comedy appeared first on Jewish Telegraphic Agency.