A magazine claims Netanyahu associates spearheaded an anti-Soros campaign. But its evidence is weak. 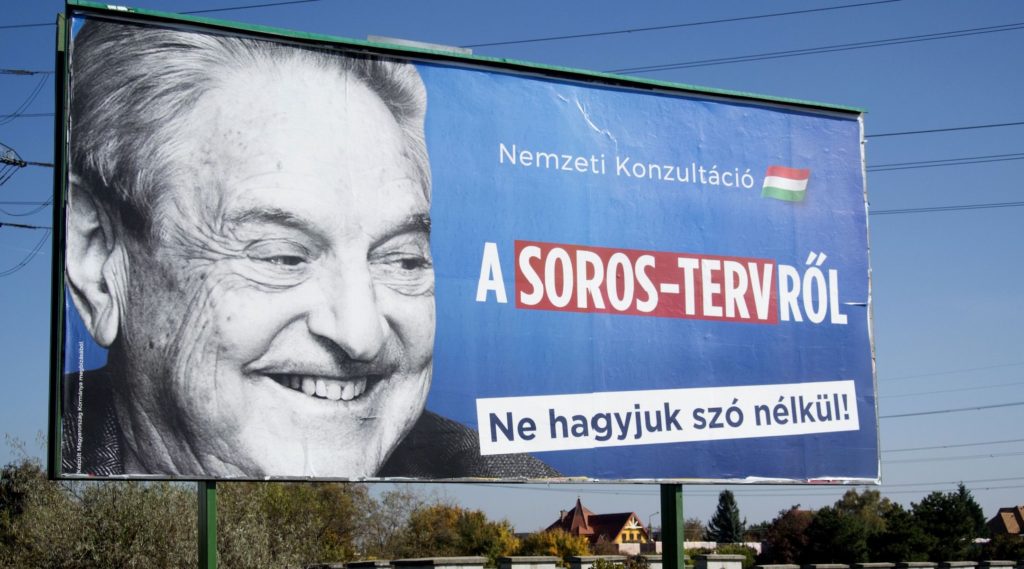 (JTA) — Over the weekend, a Swiss magazine announced an explosive (and very Jewish) scoop involving three of the most divisive figures in world politics today.

The claim, if true, doesn’t flatter Orban, who it alleges mounted a hate campaign against a Holocaust survivor purely to invent a villain for his nationalist base. But it’s potentially damning for the Israeli leader, who has tried to position himself at the forefront of the fight against anti-Semitism.

After all, critics of Orban’s 2017 campaign said it risked inflaming anti-Semitic sentiments in Hungary and beyond.

A careful reading of the 5,000-word article and the timeline it offers, though, raises some questions about its credibility. It seems based on a single source, and ignores or downplays major factors in the anti-Soros campaign.

The spin doctors, according to the article, were the late Arthur Finkelstein and his associate, George Eli Birnbaum. Finkelstein, who died in August 2017, advised Orban in 2013 to go after Soros publicly, Birnbaum told Das Magazin.

Orban’s people resisted at first, in Birnbaum’s telling, but eventually Orban came around. In May 2017 he authorized a billboard campaign that featured a picture of Soros smiling and the words “Don’t let him have the last laugh.” Soros, a mega-philanthropist of liberal causes who took a particular interest in his native Hungary, has often been placed at the center of various anti-Semitic conspiracy theories. To some, the poster seemed to be a spin on the “laughing Jew” motif popularized by the Nazis.

The Hungarian leader also spoke frequently about Soros in speeches, while authorities in his Central European nation found ways to limit the multitude of left-wing organizations funded there by Soros.

The article does not offer evidence supporting Birnbaum’s claim that he and Finkelstein inspired the campaign. Nor does it address the fact that when the campaign was launched, Finkelstein was wasting away from the lung cancer that killed him weeks later and likely would have made it extremely difficult for Finkelstein to take any active part in the campaign.

It does not address the fact that even Hungarian Jews are divided on claims that the campaign encouraged anti-Semitism. (Though it does include a denial by Birnbaum, who is quoted as saying, “When we planned the campaign, we never thought for a second about Soros being a Jew.”)

But the narrative’s real weakness is the time frame. It mentions only in passing that Orban and Soros clashed amid a national debate on a wave of unauthorized immigration of millions of people into Europe, most of them Muslims from the war-torn Middle East — especially Syria’s civil war, which erupted n 2011. In that debate, these two powerful men were in diametrically opposed camps.

In 2015, Soros, who has billions at his disposal, published a detailed op-ed urging the European Union to take in 1 million migrants and refugees a year and share the burden of paying for them — something the Hungarian government now calls the “Soros Plan.” Later that year, Soros declared, “Our plan treats the protection of refugees as the objective and national borders as the obstacle.”

Months earlier, Orban said in a speech, “For us migration is not a solution but a problem … not medicine but a poison, we don’t need it and won’t swallow it.” Hungary, he said in another speech that year, “must defend its rule of law, and also its borders. We do not want Hungary to be a target country for illegal immigrants.”

Against this fundamental ideological clash, what role did Finkelstein’s alleged advice from 2013 play in Orban’s decision to finally go after Soros four years later?

The Guardian’s Budapest correspondent, as indeed many other observers, attribute the clash to the migration crisis.

And should we believe another spin doctor’s apparent spin?

The author of the article, Hannes Grassegger, did not immediately reply to JTA’s query on these questions and others.