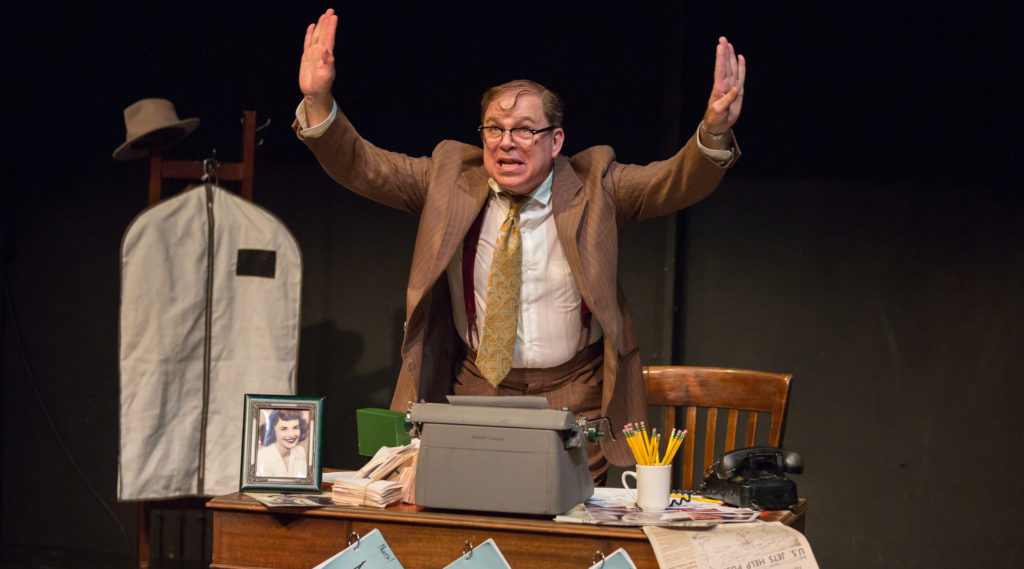 (JTA) — “A Jewish Joke,” an award-winning one-man show about a Jewish screenwriter tasked with a difficult decision during the McCarthy era, is coming to Off-Broadway.

The show’s co-writer and star, Phil Johnson, plays Bernie Lutz, a fictionalized version of Abraham Polonsky, an Academy Award-nominated screenwriter who was blacklisted by Hollywood studios for refusing to testify before the House Un-American Activities Committee.

In “A Jewish Joke,” Lutz is forced to choose between saving his career or defending his friend and writing partner from potentially blacklistable accusations. The play opens this week and runs through March 31 at The Lion Theater in New York City.

The idea grew out of Johnson’s upbringing “in a very dour family,” he told the Jewish Telegraphic Agency.

“Jewish humor was my life since I was 9 years old. Jewish comedians got me through some bad times,” Johnson said. “I’m Italian and Irish, but in a special way I’m Jewish.”

Johnson wanted to examine the golden age of Jewish comedy through a curmudgeon character, and took his idea to co-writer Marni Freedman. Polonsky was one of her favorite instructors at the University of Southern California film school.

“So many people at the time were all about money and how best to sell out,” Freedman said of the 1950s. “And then there was Abraham, who was like a man from a different era. He had more integrity than any man I’d ever met.”

Polonsky insisted his name not be credited on the 1991 film “Guilty by Suspicion,” which supposedly was based on his life, and starred Robert De Niro. Director Irwin Winkler rewrote the script, and De Niro’s character was no longer explicitly communist in the final version. Polonsky, who died in 1999 at age 88, could have made a large sum of money from the film.

“He disagreed with what they were doing,” Freedman said. “He actually was a communist, and they were changing that in the character.”

“I’ve always been the kind of person rooting for the underdog,” he said. “My husband is very much involved in the Jewish community and the words ‘tikkun olam’ are something I very much believe in. How do people stand up for what is right? That’s what this play is very much about.”