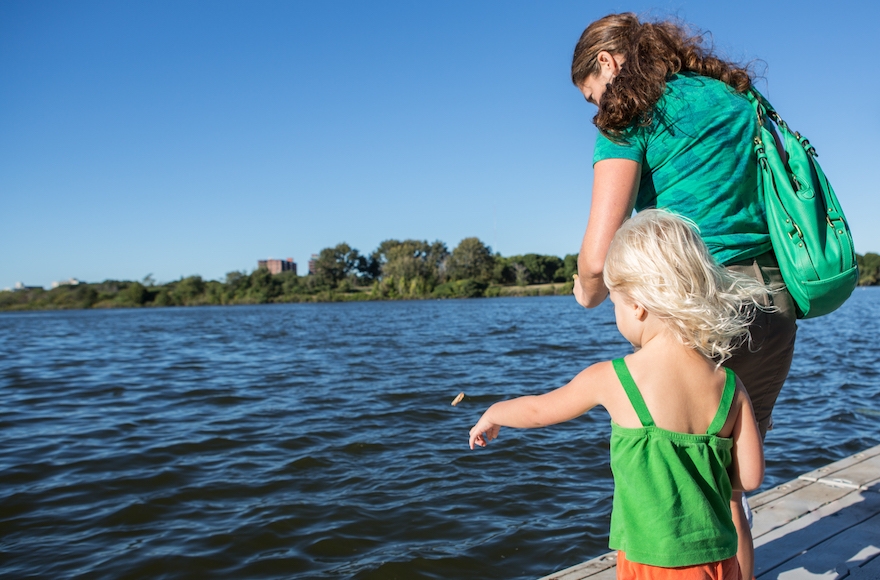 2015 was the last year that Temple B’nai Brith families were allowed to use bread at the traditional tashlich ceremony at the Blessing of the Bay Boathouse in Somerville, Mass. (Sharona Jacobs)

SOMERVILLE, Mass. (JTA) — On the first afternoon of Rosh Hashanah, Rabbi Eliana Jacobowitz will lead her congregation on a walk to the Blessing of the Bay Boathouse on the Mystic River for tashlich, a centuries-old ritual when Jews symbolically discard their sins from the past year into a moving body of water.

But instead of the customary bits of stale bread, breadcrumbs or even bits of matzah saved from last Passover, congregants will toss small pebbles.

Members of Temple B’nai Brith, a non-affiliated congregation in this Boston suburb with historic ties to the Conservative movement, have likely been tossing bits of bread into the Mystic during tashlich for well over a century.

The congregation, which has been this reporter’s Jewish home for more than a quarter-century, was founded in 1904 by immigrants from Eastern Europe who settled in Somerville’s Winter Hill neighborhood, less than one mile uphill from the river.

The recent shift in the tashlich practice from bread to pebbles follows the city’s new environmentally friendly rules that no longer allow bread to be tossed into the river, a measure to protect river wildlife and address other concerns.

“Yes, our congregation is environmentally conscious and this was an appealing reason [to change] something we care about on a social justice level,” Jacobowitz said.

The challenge of creating an environmentally friendly tashlich is emerging beyond this city. An article on ReformJudaism.org last year highlighted newer practices, including one congregation in Ontario using untreated wood chips instead of bread.

Whatever they use, congregants aren’t meant to think that the ritual is a substitute for the hard work of teshuvah, or repentance, which extends from Rosh Hashanah (it starts this year on Sunday night) to Yom Kippur (Sept. 18-19). Another Jewish atonement practice known as kapporot, in which a live chicken is swung over a penitent’s head, has also come under scrutiny, lately by animal rights activists. It is performed much more rarely than tashlich.

In Somerville, the subject was first raised three years ago when its Parks and Recreation Department notified the synagogue that tossing bread violated guidelines from the Environmental Protection Agency and local efforts to protect the environment. The city said feeding wildlife is harmful to their nutrition, leads to poor water quality and disrupts the ecosystem.

In addition to the potential harm to birds, feeding animals brought “an unintended invitation for animals around the boathouse, including issues with geese on the docks,” Jill Lathan, the Parks and Recreation director, wrote in a recent email to JTA.

At the time, efforts to clean up the river from decades of relentless pollution from industry, development and storm drainage were paying off. In 2017, the river scored an A-minus for water quality from the EPA, up from a D 11 years earlier.The success story was the result of years of collaboration between Somerville and other local communities, the  EPA, the Commonwealth of Massachusetts and the nonprofit Mystic River Watershed Association.

The 7-mile-long Mystic River flows through 22 towns just north and west of Boston. From Somerville, it goes downstream through the Amelia Earhart Dam through Everett, Charlestown and into Boston Harbor.

The appropriately named Blessing of the Bay boathouse where Temple B’nai Brith holds tashlich services is named after a 17th-century wooden ship, the first oceangoing vessel built in Massachusetts, according to the Mystic River Association.

In September 2015, before the start of the High Holidays, the city granted a one-year waiver to the synagogue, acknowledging its longstanding tradition of using bread during the tashlich ceremony. The congregation assured the city that it would educate members about the issue and evaluate environmentally acceptable options ranging from birdseed to earthworms to small pebbles. 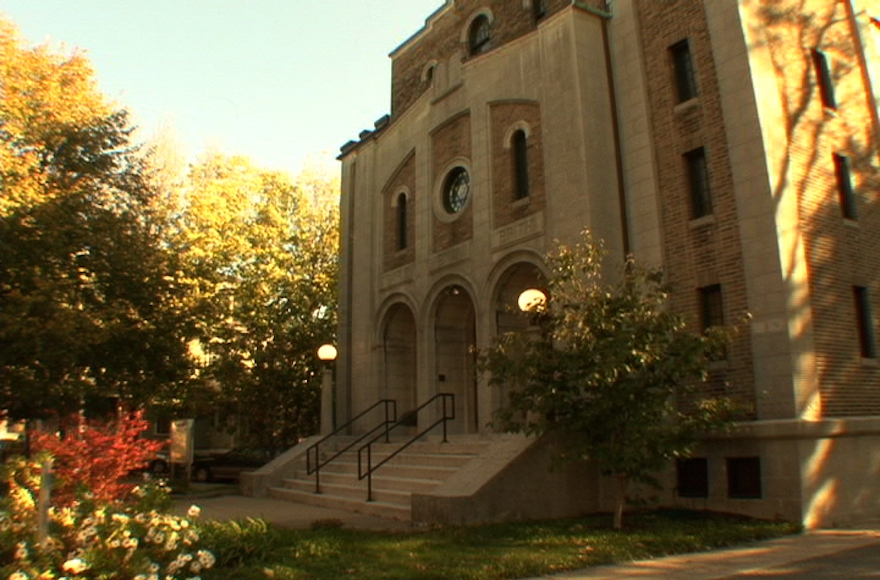 After some rabbinical consideration, Jacobowitz concluded that for tashlich, small pebbles had greater resonance than birdseed. Pebbles will sink to the bottom of the river, an echo of the last verses of the prophet Micah (7:19), that is the textual basis for the tashlich ritual, she explained: “God will take us back in love; God will cover up our iniquities. You will cast all their sins into the depths of the sea.”

“There was a bit of communal grief,” acknowledged Jacobowitz, who was ordained in 2010 at the pluralistic Hebrew College rabbinical school.

Many people had a strong attachment to the bread tossing, she said, and a few synagogue members have a tradition of saving bits of matzah from Passover for tashlich.

“There was this element of planning” long in advance, the rabbi said.

In a touch of irony, Jacobowitz pointed out that in her native Israel, bread is not used during tashlich. She said Israelis more commonly stroll to the sea or other body of water and turn their empty pockets inside-out, reflecting the idea that “you are not bringing your sins with you” into the new year.

As a resident of Somerville, Jacobowitz said the environmental improvements along the river in the past few years are noteworthy.

“It’s lovely. The water is better,” she said. Sometimes she visits the area to think about her High Holiday sermons and “I see that it is being transformed.”

Amid the challenge to create an environmentally friendly tashlich, Jacobowitz has created a new tradition for Temple B’nai Brith’s younger tashlich-goers: She brings a bedsheet to the river and invites them to write something that they are sorry for and hope to change in the new year. They use pens with ink that dissolves after 24 hours. She returns the sheet to the synagogue on Yom Kippur and the kids see that their regrets have disappeared.

“From the perspective of modeling what we want to see in the world, I do feel proud of our community for taking that step, especially in the [High Holiday] season when we are thinking of how we can do better in the world,” Jacobowitz said.

After much reflection, the rabbi has concluded that “This is not about bread versus pebbles,” but rather about exchanging a ritual that has content with another that is just as compelling. Over time, she anticipates the newer ritual will take hold in a meaningful way.

“It’s about replacing the spiritual experience with another practice that will feel equally spiritual,” she said.

The post A Jewish atonement ritual (not the chicken one) gets an eco-friendly makeover appeared first on Jewish Telegraphic Agency.