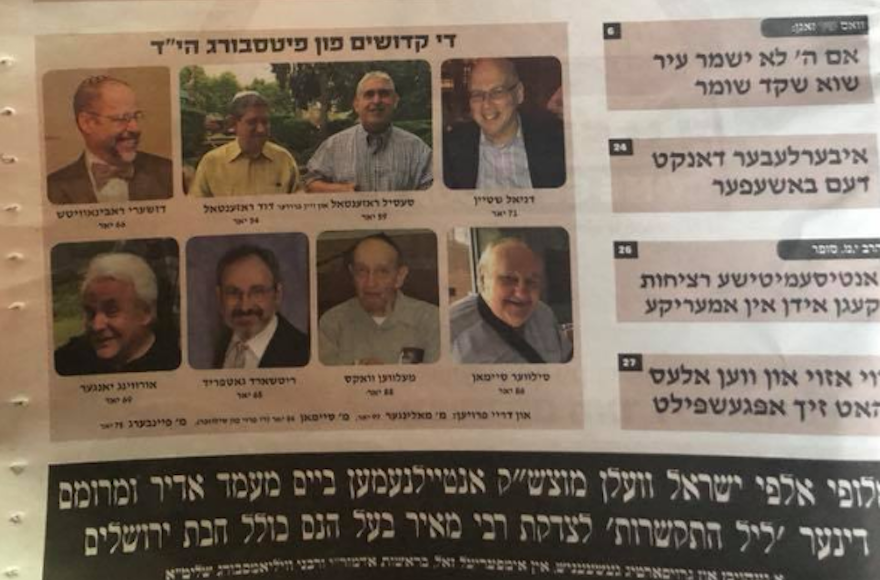 (JTA) — The cover of a New York-based Yiddish-language weekly features, unsurprisingly, an emotional tribute to the 11 people killed in the synagogue massacre Saturday in Pittsburgh. Under the headline “The Martyrs From Pittsburgh,” the Nov. 2 edition of Di Tzeitung includes photos of only eight victims, however, all of them men.

Beneath the photo a caption reads “And three women.”

Readers outside the Hasidic Jewish  community tend to be outraged by such omission of women, living and dead, in the haredi Orthodox media. A headline in the Forward said the three victims — Bernice Simon, Joyce Fienberg and Rose Mallinger  — had been “erased.”

But for Di Tzeitung’s editor, it is standard operating procedure.

“This is a non-story,” Albert Friedman told the Forward. “The Hasidic papers have a policy not to post pictures of women. However, they are mentioned prominently in the story. They are not denigrated in any way.

“Nobody in our readership complains about it because this is what our readership wants,” he said. “Even if Mrs. Clinton were president, her picture would not appear.”

It is the same newspaper that in 2011 ran an iconic photo of top Obama officials monitoring the raid that killed Osama bin Laden, but photoshopped out then-Secretary of State Hillary Clinton and a second woman. Di Tzeitung later apologized for deleting the women, though it reiterated its “long-standing editorial policy” of not publishing women’s images.

It said its readers “believe that women should be appreciated for who they are and what they do, not for what they look like, and the Jewish laws of modesty are an expression of respect for women, not the opposite.”

Another haredi newspaper, Hamodia, also has a policy of not publishing women’s photos. It offered extensive coverage of the synagogue shooting, including on at least three covers shown on its website. Hamodia chose images that did not feature women, including one of the makeshift memorial in front of the Tree of Life Congregation.

Earlier this year, in an op-ed in The Times of Israel, Orthodox activist Shoshanna Keats Jaskoll wrote of growing opposition by Orthodox women to the photo ban in newspapers, books and advertisements, and urged Orthodox groups to call on publishers to end the practice.

“There are Facebook groups dedicated to the sole effort of changing these policies. These women want visible role models for their daughters,” she wrote. “They want to see people they identify with in the pages of magazines. They are hurt and confused at the notion that the very presence of a modestly dressed Jewish woman — or girl– is taboo.”