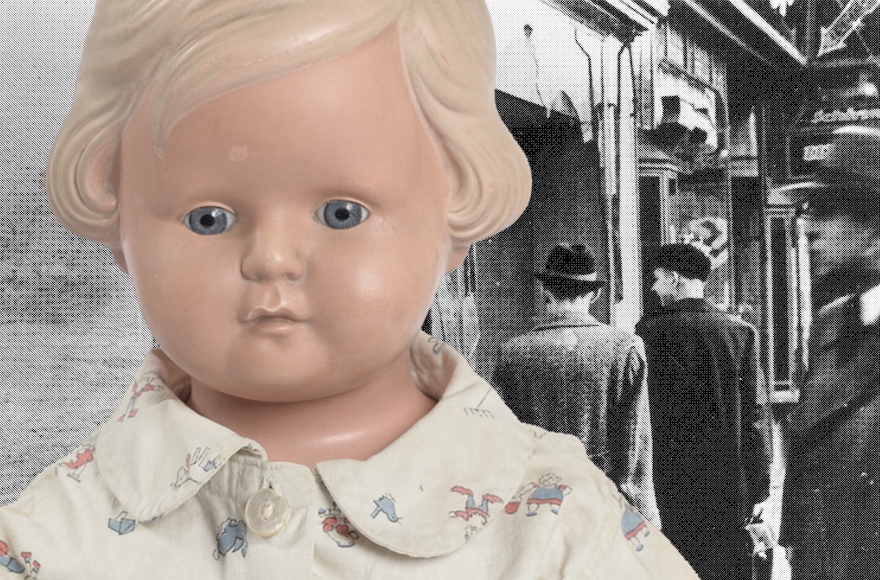 This doll is Lore Mayerfeld’s direct link to the events of Kristallnacht. (Yad Vashem/Getty Images)

JERUSALEM (JTA) – For decades as an adult, Lore Mayerfeld kept a doll on a chair in an off-limits bedroom or high on a shelf. Her children – and later her grandchildren and great-grandchildren – knew not to play with the toy for fear of breaking it.

Dressed in off-white pajamas adorned with colorful bunnies and chicks, the doll named Inge represents more than a sentimental item from Mayerfeld’s childhood in Kassel, Germany.

It is her direct link to Kristallnacht, the fearful night in November 1938 that would exile Mayerfeld and her parents, Markus and Kaetchen Stern, to the United States. Mayerfeld, then 1 1/2 years years old and wearing those two-piece pajamas, took her blonde-haired, blue-eyed doll into hiding.

The doll had been given to Lore (pronounced Laura) by a grandparent, although she’s not sure which one.

Now 81 and living in Israel, Mayerfeld donated the doll and pajamas earlier this year to Yad Vashem, Israel’s national institution commemorating the Holocaust.

The items constitute part of an online exhibition that opened Thursday on the eve of the 80th anniversary of Kristallnacht, the Nazi-instigated pogrom in Germany and Austria in which 91 Jews were killed, 30,000 Jews arrested, 1,400 synagogues set on fire, and countless homes and businesses vandalized.

Titled “It Came from Within,” the exhibition displays donated items, each from a survivor of Kristallnacht. They “are a way to tell the story through those personal artifacts,” Yad Vashem curator Yona Kobo said. “It’s more powerful, more intense and touches us more.”

Mayerfeld’s gift includes her parents’ wedding photograph and several letters sent by her father from New York during World War II to non-Jewish friends in Zimmersrode, his hometown, inquiring about his relatives. She now retains only a few bowls and gravy boats from the Sterns’ life in Germany.

Her decision to donate the items followed a group telephone consultation with her three children, all of whom also live in Israel. Yad Vashem researchers interviewing Mayerfeld last winter solicited the donation after hearing of the doll.

“I just felt it had more meaning to Yad Vashem,” an elegantly dressed Mayerfeld told a visitor to her seventh-floor apartment that overlooks the Knesset and Teddy Stadium. “People from all over the world will look at it and say it came from Germany and had all this meaning.” 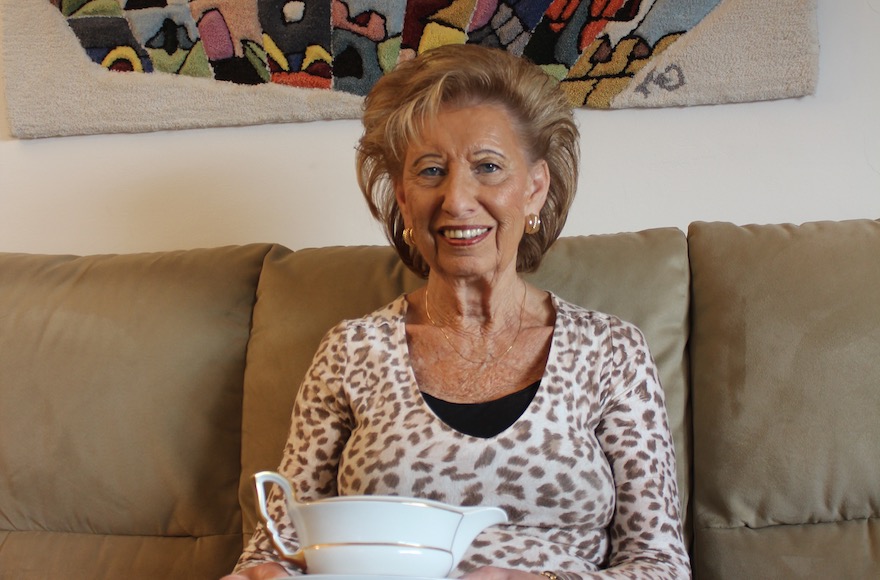 Lore Mayerfeld of Jerusalem holds a gravy boat that her late father brought from Kassel, Germany, to America in 1938. (Hillel Kuttler)

As a girl in New York, Mayerfeld kept Inge in a doll carriage someone gave her. Inge was the sibling that Mayerfeld never had; Markus and Kaetchen explained once that they didn’t have more children because they married late and were apart when Markus was sent to the Buchenwald concentration camp, and again when he moved to America ahead of them and struggled in their new country. When Inge’s arm and leg were damaged, her parents had repairs made at a neighborhood shop.

Mayerfeld said that history made her decision to part with Inge difficult.

Her son Mark said that his mother initially wanted to pass the doll to her children.

“We said we thought it’d be more meaningful if people could see it and understand what it meant to you,” he said. “It’s very important for our people to keep the message and understanding alive.”

Mark Mayerfeld said he understood much about his parents’ wartime experiences – his late father, Henry, was a Worms native – from watching the museum’s interview with Lore.

“While my mother didn’t go through the concentration camps, the whole experience of Kristallnacht had a major effect on her life,” he said. “It was traumatic. The fact she was able to speak about it in such detail – I was actually proud of her.”

Lore Mayerfeld told JTA that her mother had learned from a neighbor of the impending pogrom. Kaetchen and Lore hid in a non-Jewish family’s home for a night or two, then went to live with Kaetchen’s mother in Borchen. Markus was arrested and sent to Buchenwald, then freed after six weeks because he held an American visa. He was deported immediately, settling in the New York City neighborhood of Washington Heights, where two of his siblings had moved several years earlier, and working as a salesman. He secured visas for his wife and daughter.

Mayerfeld said that she and her mother took a train to Paris, where a conductor gave her a chocolate bar, and on to Portugal to catch a boat that reached New York in early September 1941.

The five Sterns were the only members of either family not murdered in the Holocaust. Nothing was learned of the fate of Markus’ younger sister, Sarah. Everyone else was killed in Auschwitz and Theresienstadt.

About 20 years ago, Lore and Henry visited Germany for the only time. Lore could not find her apartment in Kassel. In other towns, they visited relatives’ graves and former homes. In Borchen, a woman pointed out where the synagogue Kaetchen attended once stood. It was destroyed on Kristallnacht.

In recent years, Mayerfeld has told her family more about the family’s life in Germany. Much of the information came from her parents, since she remembers little. Some of Mayerfeld’s 18 great-grandchildren were the age she was during Kristallnacht.

Mayerfeld hopes that seeing Inge displayed at the museum will spark their interest.

“In the years down the line,” she said, “my great-grandchildren can look at it and say ‘It’s special.’”

The post A girl’s doll is a poignant reminder of the horrors of Kristallnacht appeared first on Jewish Telegraphic Agency.