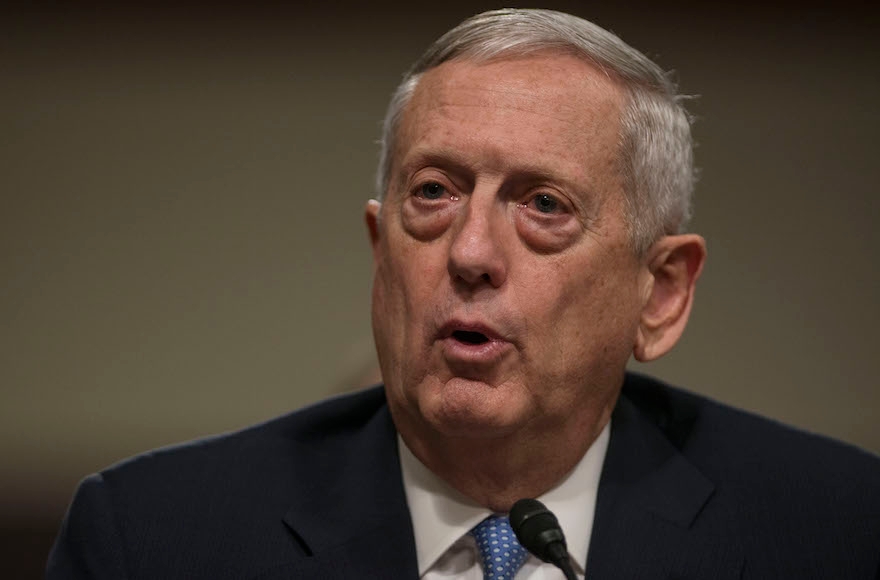 WASHINGTON (JTA) — James Mattis is quitting as defense secretary and his extraordinary resignation letter has brought into the open an argument among conservatives on whether to cut and run in the Middle East or whether to stay with no clear outcome.

The argument also touches on two subjects near and dear to the hearts of Jewish political players: how best to contain Iran, and how robust a role the U.S. should play in the region.

Mattis did not mention Syria in his letter Thursday, but reports said that Trump’s decision earlier this week to pull 2,000 U.S. troops from Syria was the trigger. President Donald Trump said it was time to go because the Islamic State, or ISIS, is defeated. Numerous experts noted, however, that ISIS has lost most of its territory, but is still active.

Matthew Levitt of the Washington Institute for Near East Policy, and a veteran anti-terrorism analyst of the George W. Bush presidency, summed up on Twitter the criticism of Trump’s Syria move: “In one fell swoop @POTUS upended his own admin’s 3 pronged Syria policy, sidelined all his top officials, alienated all our closest allies, set the stage for an ISIS resurgence, gifted the Levant to Iran, & guaranteed huge Mideast instability in 2019.”

Israeli Prime Minister Benjamin Netanyahu also appeared less than pleased. His office on Thursday said that the prime minister and president had spoken about Trump’s decision. The outcome seems hardly conclusive. “The two discussed ways to continue cooperation between Israel and the US against the Iranian aggression,” the statement said.

Netanyahu has said that the outcome of any final status agreement to end the seven-year civil war that has devastated Syria must include Iran’s removal from the scene. Iran, which with its Lebanese ally, Hezbollah, helped the Assad regime win the war, has no intention of leaving. Russian President Vladimir Putin, Syrian President Basher Assad’s other ally, has said — tepidly — that maybe he can get Iran to stay 60 miles away from Israel’s border with Syria.

Netanyahu is already taking hits from the opposition for not putting up a fight, one they say he surely would have waged had Barack Obama made the same decision as Trump. Netanyahu  has staked a lot of his political capital on his close relationship with Trump.

Mattis in his letter drew a direct contrast between his outlook, favoring the maintenance of close alliances and a robust wariness of rivals and enemies, and that of Trump, who has sought to loosen alliances and to reconcile with Russia and other antagonists.

“One core belief I have always held is that our strength as a nation is inextricably linked to the strength of our unique and comprehensive system of alliances and partnerships,” Mattis said in a letter the Pentagon handed to reporters after Trump said on Twitter that Mattis was “retiring” and not resigning.

“Similarly, I believe we must be resolute and unambiguous in our approach to those countries whose strategic interests are increasingly in tension with ours,” Mattis said. “It is clear that China and Russia, for example, want to shape a world consistent with their authoritarian model—gaining veto authority over other nations’ economic, diplomatic, and security decisions—to promote their own interests at the expense of their neighbors, America and our allies.”

In case anyone doubted where this was heading, Mattis made it clear as day that he did not believe Trump shared these beliefs. “Because you have the right to a Secretary of Defense whose views are better aligned with yours on these and other subjects, I believe it is right for me to step down from my position,” he said.

Trump fired back from his favorite bunker, Twitter. “I’ve done more damage to ISIS than all recent presidents….not even close!

Trump took incoming fire after announcing the Syria pullout, and it intensified after Mattis said he was quitting. It came, unusually, from Republicans.

“ISIS has members who spend all day plotting & inspiring attacks against Americans,” Sen. Marco Rubio, R-Fla., said. “The more territory they control the easier it is for them to do that. In Syria 2000 US special forces were helping Kurds wipe them out.”

The Senate majority leader, Mitch McConnell of Kentucky, also slammed Trump for precipitating Mattis’ departure — McConnell has otherwise had Trump’s back on an array of controversial policies. “I believe it’s essential that the United States maintain and strengthen the post-World War II alliances that have been carefully built by leaders in both parties,” he said.

The back and forth extended to Jewish Republicans. “The media that’s having this hysterical reaction to James Mattis retiring is the same media in many cases, the same politicians in many cases, who cheered our nation into a war in Iraq that turned out to be an absolute catastrophe,” Stephen Miller, a top Jewish adviser to Trump, told CNN. “This president got elected to get our foreign policy back on the right track after years of being adrift. One foreign policy blunder after another in Iraq, in Afghanistan, in Libya, that hasn’t worked out for the national interest.”

Jewish Insider solicited a scathing reply from Elliott Abrams, a top national security official in a number of GOP administrations. “Mr Miller knows nothing about national security policy,” Abrams said. “Barack Obama is the man who abandoned Iraq, and that action opened up a vacuum in which ISIS grew. Many, many Republicans remember that and recognize the dangers of abandoning Syria. They said when Obama pulled out of Iraq far too soon that it was a great mistake, and they are saying the same thing now.”