A day after Pompeo talks up US role in the Middle East, troops start to leave Syria 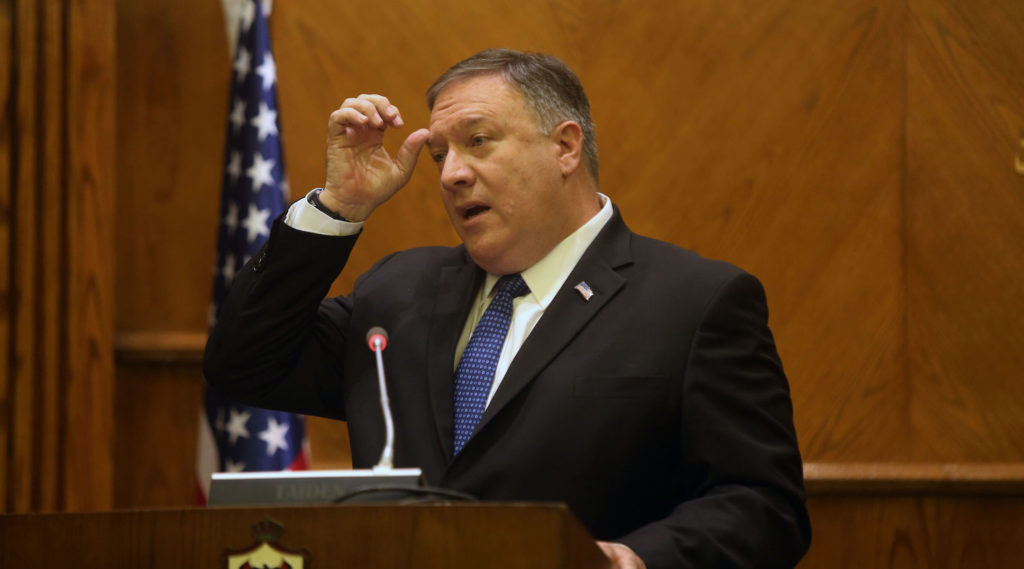 WASHINGTON (JTA) — Secretary of State Mike Pompeo gave a speech Thursday in Cairo, and much of it was about dissing his boss Donald Trump’s predecessor, Barack Obama, for what Pompeo said was diminishing U.S. influence in the region.

Pompeo’s message was clear: “America,” he said Thursday, “is a force for good in the Middle East,” implying that Obama thought otherwise.

If Pompeo hoped his message would resonate, it was taken over within hours by the news cycle. Col. Sean Ryan, the spokesman for the coalition fighting the Islamic State in Iraq and Syria, said that “the process of our deliberate withdrawal from Syria” was underway. The spokesman would not say exactly when all 2,000 American troops would be out.

The whiplash is nothing new: Within days of Trump saying last month that the withdrawal had started, top deputies, including Pompeo and National Security Adviser John Bolton, were saying there was no timeline for the withdrawal. Another top adviser, Defense Secretary James Mattis, quit in frustration.

Bolton has said the total removal of ISIS and commitments from Turkey not to harm Kurdish allies in Syria were necessary predicates for withdrawal. None of that has happened.

Israel’s government has been rattled by the pullout — it wants the Syrian Assad regime’s backers, including Iran and its Lebanese Hezbollah ally, out of Syria now that the seven-year civil war is winding down and it looks like strongman Basher Assad has prevailed.

The other actor in Syria, Russia, is happy to coordinate with Israel to allow Israel to keep hitting Iranian targets, and has said it wants Iran to stay 60 miles away from the Syrian border with the Israeli-held Golan Heights. But booting Iran out, for the Russians, is a non-starter.

Any hopes of totally removing the Iranians and Hezbollah rested on U.S. influence, which is about to drastically diminish with the troops’ withdrawal.

“When Bashar Assad unleashed terror upon ordinary Syrians and barrel-bombed civilians with sarin gas, a true echo of Saddam Hussein’s gassing of the Kurdish people, we condemned his actions,” Pompeo said, in what became an extended Obama beatdown. “But in our hesitation to wield power, we did nothing.” (In fact, the 2,000 troops have been in Syria since 2014 partly in response to the 2013 sarin gas attack.)

By contrast, Pompeo said, “We strongly support Israel’s efforts to stop Tehran from turning Syria into the next Lebanon.”

How? Details were sparse and less than overwhelming. Pompeo said that the United States had targeted for sanctions the son of Hezbollah’s leader, Hassan Nasrallah. Hezbollah has been subject to such U.S. sanctions for decades, and is thriving and growing.

“There will be no U.S. reconstruction assistance for areas of Syria held by Assad until Iran and its proxy forces withdraw and until we see irreversible progress towards a political resolution,” Pompeo said. It was another threat high on calories, low on nutrition: Syria has been under U.S. sanction since 2003, and has gotten along quite nicely without U.S. assistance.

Pompeo noted that Obama had also given a policy speech in Cairo, in 2009. The venues said everything that Pompeo was trying to convey: He spoke Thursday at the American University, part of a network of schools overseas that was founded in part to bring American values abroad. Obama, who hoped to launch a new day in U.S. relations with the Muslim world, spoke at Al-Azhar University, the preeminent Sunni Muslim learning institution.

Pompeo would have none of what he depicted as Obama’s kowtowing to Islamists. (Egypt’s current regime has targeted and jailed Islamist opponents.)

“It was here, here in this city, that another American stood before you,” Pompeo said. “He told you that radical Islamist terrorism does not stem from an ideology. He told you that 9/11 led my country to abandon its ideals, particularly in the Middle East. He told you that the United States and the Muslim world needed, quote, ‘a new beginning,’ end of quote. The results of these misjudgments have been dire. In falsely seeing ourselves as a force for what ails the Middle East, we were timid in asserting ourselves when the times – and our partners – demanded it.”

Pompeo argued instead for a robust embrace of American ideals — and he presented himself first and foremost as an evangelical Christian believer.

“In my office, I keep a Bible open on my desk to remind me of God and His Word, and The Truth,” he said.

Obama drew a distinction in his 2009 speech between his policies and those of George W. Bush, although he was more opaque and not entirely dismissive of Bush’s worldview in launching the Iraq War: “Although I believe that the Iraqi people are ultimately better off without the tyranny of Saddam Hussein,” Obama said, “I also believe that events in Iraq have reminded America of the need to use diplomacy and build international consensus to resolve our problems whenever possible.”

Obama alumni already are striking back.

“President Obama’s Cairo speech presented America to the international Muslim community as an engaged partner, one that would hold them to the high standards to which we have sought to hold ourselves,” said National Security Action, a clearinghouse advocacy group for many Obama alumni. “Nearly 10 years later, we can only expect Pompeo to do the opposite.”

Some suggested Pompeo’s vision wasn’t all that far from Obama’s.

“With the exception of the Iran nuclear deal — admittedly a big exception — Trump’s approach of working with allies against common enemies while reducing America’s military footprint is a continuation, not a repudiation, of Obama’s second-term foreign policy,” Eli Lake wrote in Bloomberg.

Of course, veterans of Trump world were ecstatic.

“‘America First’ means rallying our effective allies and putting our adversaries on the defensive,” wrote Christian Whiton, a former adviser in the Trump administration and a senior fellow at the Center for the National Interest.

By contrast, Erin Dunne of the conservative Washington Examiner complained that the speech “seemed to offer two separate policies”: withdrawal and its opposite.

“As a consolation for those worried about the dangers of American adventurism and its consequences of instability in the past, Pompeo’s answer was unconvincing,” she wrote.

Beyond the uncertainties, another factor that might be rattling folks in the region is that two years into the Trump administration, his team can still sound like the new kid on the block.

Pompeo marveled in his speech, “Who could’ve believed a few years ago that an Israeli prime minister would visit Muscat?” Pompeo was referring to Benjamin Netanyahu, who went to the capital of Oman last year.

But as Joyce Karam, the Washington correspondent for Abu Dhabi’s The National, pointed out on Twitter, Netanyahu was the third Israeli prime minister to visit Oman: Yitzhak Rabin in 1994 and Shimon Peres in 1996. Their welcome was precipitated by the Oslo peace talks with the Palestinians — a framework that the Trump administration has reviled.