A conference of American Jews seeks dialogue with Israelis. But which Israelis, and to what end? 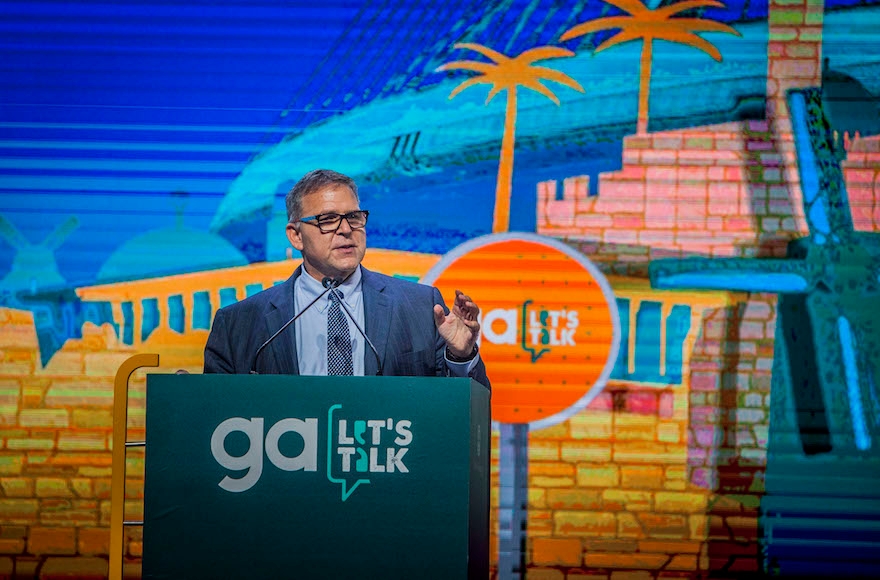 TEL AVIV (JTA) — On Sunday, a day before thousands of American Jews descended on this Israeli city to air their differences with the nation’s government, Israeli President Reuven Rivlin had a listening session.

Rivlin invited a select group of about 100 American Jews to his official residence in Jerusalem. While he sat in the center of the room, in a cushioned chair, three leaders of the Diaspora’s largest Jewish community explained their issues with the Jewish state.

“The Jewish identity of many young American Jews is reflected through the lens of tikkun olam, social justice values,” said Eric Goldstein, the CEO of New York’s UJA-Federation. “And they experience a mental discomfort when they use that lens to look at many current Israeli government policies: settlement policy, nation-state law, treatment of asylum seekers, marriage equality and marriage rights — more broadly, the monopoly that the Orthodox has over religion and state in Israel.”

That laundry list of grievances — everything from how Israel treats the Palestinians to whose marriages it recognizes — is what lies behind the theme of this year’s General Assembly, the annual conference of the Jewish Federations of North America, which is taking place here from Monday to Wednesday.

This year’s conference, which brings together the leaders of the American Jewish establishment for a mixture of sentimental speeches, panel discussions on pressing issues and lots of schmoozing over weak coffee, was titled “We Need to Talk.” The explicit message is that American and Israeli Jews have grown further apart and need some relationship counseling.

Around the conference hall in North Tel Aviv, signs displaying a series of statistics showed that the world’s two largest Jewish populations don’t think alike: Sixty percent of American Jews believe in the possibility of a Palestinian state, versus 40 percent of Israeli Jews. Half of American Jews are liberal. Israeli Jews? Eight percent.

And the past couple of years, Israel-wise, have been especially rough for American Jews with liberal proclivities: American Jewish leaders had negotiated for years to expand a non-Orthodox prayer section at the Western Wall. Last year, the Israeli government scrapped the compromise. The government has also moved to give the haredi Orthodox Chief Rabbinate more power over Jewish conversion. This year, Israeli police detained a Conservative rabbi for the crime of performing a non-Orthodox wedding.

Also this year, Israel passed a law defining itself as the nation-state of the Jewish people. Recent months have seen a series of Americans, mostly left-wing activists, detained and questioned at Israel’s border. A two-state solution seems nowhere in sight. President Donald Trump, reviled by American Jewish liberals and never-Trump Republicans, gets high marks among Israelis.

Israelis, meanwhile, have chafed at anti-Israel activism among some corners of American Jewry, as well as criticism from its leaders. Government representatives say they make policies according to their security and political realities, and consider the will of the voters who actually live in their country.

“Over the last few years, North American Jewry and Israel have defined their relationship by the things we don’t have in common,” Jerry Silverman, CEO of the Jewish Federations of North America, told JTA, noting “varying issues of how Israelis perceive American Jewry or are just completely apathetic to American Jewry. And I think you have an American Jewry that is growing up and is focused, especially in the younger generation, on social action, social justice issues and [who] aren’t really looking through an Israeli lens.”

If the two sides “need to talk,” though, it would be far from the first conversation. Silverman and fellow American Jewish bigwigs have been negotiating, cajoling, criticizing and appealing to the government of Prime Minister Benjamin Netanyahu for years. The Western Wall negotiations took an arduous 33 months, and the deal was frozen anyway. Organizations sent any number of strongly worded statements on a nation-state law perceived by many as anti-democratic and another law barring supporters of an Israel boycott from entering the country.

Those attending this year’s conference could also be forgiven for having some deja vu: Issues of Israeli religious policy also figured prominently at the last GA to take place in Israel — five years ago.

And even amid all the talk, a range of discontented conference participants said the GA was not talking about enough things. Some on the left said there was not enough discussion of Israel’s control of the West Bank. Critics on the right complained that not enough settlers were featured on the program. Others wanted more haredi Orthodox voices, or more Mizrachi Jewish voices or more talk of African asylum seekers in Israel. (This reporter has heard all of those complaints and more like them during the past two days.)

On Monday, a small group of young Jews protested outside the conference with a sign reading “We need to talk about the occupation.”

“I really believe that the leadership of the American Jewish community is smart and sophisticated enough to deal with complex information,” said Rabbi Jill Jacobs, executive director of the liberal rabbinic human rights group T’ruah, which lobbied for more talk of Israel’s West Bank occupation ahead of the GA. “We’re talking about the Israeli-American dialogue and the elephant [in the room] can’t be talked about.”

On the other side of the political map, a right-wing Orthodox group called the Coalition for Jewish Values complained that when the GA talked about American Jews, what it really meant was non-Orthodox Jews. American Orthodox Jews, the group said, tend to be fine with an Orthodox monopoly over marriage and conversion in Israel, as well as a hawkish security policy.

“The leadership of the American Orthodox community has been completely left out of the program, despite the fast growth of this demographic,” the group said. 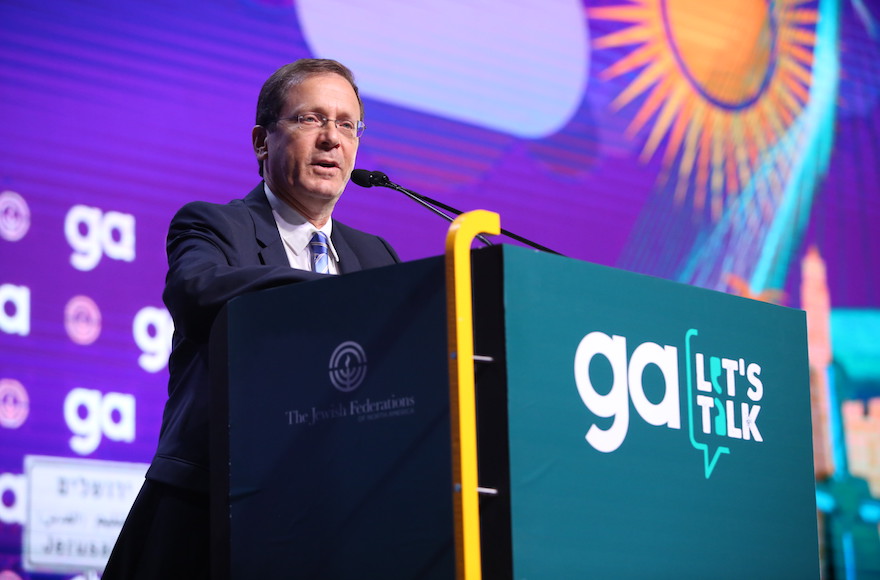 Isaac Herzog, head of the Jewish Agency for Israel, speaks at the conference, Oct. 23, 2018. He said the Israeli and American Jewish communities need to talk, echoing the theme of the General Assembly. (Courtesy of JFNA)

Federation staff countered that the GA program indeed had several sessions discussing the Israeli-Palestinian conflict, even if none of their titles used the word “occupation.” And Silverman noted that yes, non-Orthodox views got prominent exposure because the vast majority of American Jews are not Orthodox.

More than anything, the question of what to do about the gaps between Israeli and American Jewry loomed over the gathering. On that, participants had some answers. Rivlin, opening the conference, called for a “reverse Birthright” that would bring Israeli Jews to see American Jewry firsthand. He also called for a coalition of Israeli and Diaspora Jews to jointly aid the developing world.

Turns out, both those initiatives are already (kind of) happening.

Shazur (Hebrew for “interwoven”), an organization founded this year by Rabbi Amitai Fraiman, organizes one-day tours of Jewish New York for groups of Israelis in America, like young professionals or students. The tours discuss the origins of American Jewish values — from the immigrant experience to civil rights — as well as the American Jewish experience today. And the tours also include groups of American Jews, so that Israelis can meet and talk with them face to face.

“Israelis have a huge knowledge gap,” said Fraiman, himself an Israeli with American parents who now lives in New York. “They don’t have an emotional connection because they can’t sympathize with a country they can’t understand. When you’re able to see with your eyes and walk with your feet in these places, you make this emotional connection, you can empathize with the other.”

On the developing world front, Olam, a coalition of Jewish global service groups, is hoping to work with Rivlin on promoting joint American-Israeli Jewish international aid work. Olam helped organize Rivlin’s recent trip to Ethiopia, and its executive director, Dyonna Ginsburg, says working in the developing world appeals to both American and Israeli Jewish sensibilities. Israelis can appreciate the opportunity to put their scrappy entrepreneurial instincts to work, and Americans can engage in hands-on tikkun olam.

“I don’t believe it’s a panacea,” Ginsburg said regarding the potential of aid work to resolve strife between American and Israeli Jews. “But I think those two things can happen in tandem. If any relationship between two human beings is strained, you want to work on that relationship, but you [also] want to figure out what brings you together.”

Given the conference’s theme, keynote speakers devoted surprisingly little time to the Western Wall, conversion and marriage, three topics that have roiled American Jewish-Israeli relations in recent years. Natan Sharansky, the Soviet dissident who previously chaired the Jewish Agency for Israel, was the architect of the Western Wall deal and publicly criticized Netanyahu last year for freezing it.

But Isaac Herzog, Sharansky’s successor, in his speech Tuesday to the GA did not even mention the Western Wall. Instead he struck a more conciliatory note and called for Israel to fund Hebrew language education for Diaspora Jews.

And on the afternoon of the second day of the conference, he said that, well, we need to talk.

“These are two different communities,” Herzog said. “But we must honor our brotherhood as Jews by understanding that there’s a dialogue amid differences.”

The post A conference of American Jews seeks dialogue with Israelis. But which Israelis, and to what end? appeared first on Jewish Telegraphic Agency.