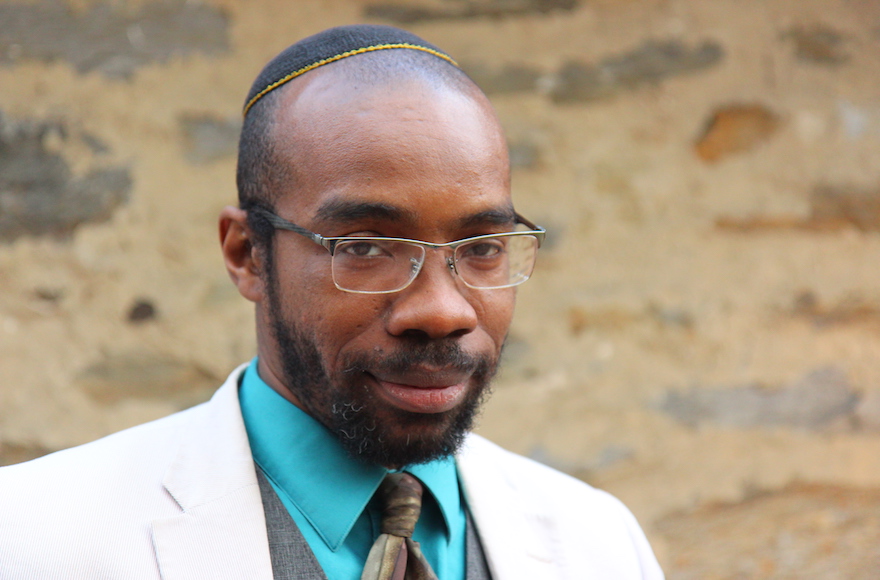 NEW YORK (JTA) — When Shais Rishon thinks of American Jewish literature, virtually no Jews of color come to mind — as characters or authors.

As an African-American Orthodox rabbi, Rishon hopes to change that.

He recently published a semi-autobiographical novel titled “Ariel Samson: Freelance Rabbi,” under his pen name, MaNishtana. The main character, Ariel, is a 20-something black rabbi navigating life and work in the New York Jewish community while attempting to reconcile his identities.

Rishon, 36, says many of the racist experiences Ariel faces within the Jewish community are either based on his own life or stories told to him by other Jews of color. One episode, in which Ariel confronts an Orthodox New York assemblyman over wearing a blackface costume on Purim, is a “verbatim” recollection of a conversation that Rishon had with a real local politician who did that.

(Rishon did not reveal the politician’s true identity in his interview with JTA, but based on the description, the book is almost certainly referring to Dov Hikind, who was widely criticized for wearing a blackface costume in 2013 and whom Rishon addressed in an open letter.)

Rishon grew up in Brooklyn in a black-Jewish family affiliated with the Chabad-Lubavitch moment, though today he identifies simply as Orthodox. His mothers’ ancestors have been practicing Judaism since the 1780s, he says.

The author and educator, who has written about racism in the Jewish community for years for publications like the Forward and Tablet, hopes his book, which he self-published in September, can challenge wide-held notions about the traditional American Jewish experience.

Often, he says, works by black-Jewish authors and artists are seen as reflecting only the African-American experience and not the Jewish one.

The book also shows the questioning that many Jews of color continually face about their backgrounds. In the novel, a man at a Shabbat dinner asks Ariel intrusive questions, including if he is a convert and Ethiopian.

Rishon hopes to show why such lines of questioning are hurtful.

“When you see somebody with one arm, do you ask them ‘Hey, what’s up with your arm?’” he wonders. “It’s just the basic courtesy of getting to know someone.”

Rishon says he has received threatening and angry messages in response to his writing about racism in the Jewish community. He uses a pseudonym in order to shield his family and friends from the backlash. The name is a reference to the Ma Nishtana reading sung on Passover asking why the seder dinner differs from a regular meal.

Outside of his writing, Rishon works full time as a content manager for Bend the Arc, a progressive Jewish social justice organization. Rishon also serves as the rabbi for an Orthodox prayer group in New City, a town an hour from Manhattan where he lives with his wife and 5-year-old daughter. He is pursuing a second rabbinic ordination; he was previously ordained privately.

In recent years, Jewish organizations have increasingly focused on embracing and highlighting diversity within their own communities, but Rishon says plenty remains to be done.

“I would say it’s just now starting to move in baby steps away from tokenization,” he says.

Rishon sees his novel as one step in that direction.