6,000 high school students and supporters arrive in Jerusalem after march from Gaza border 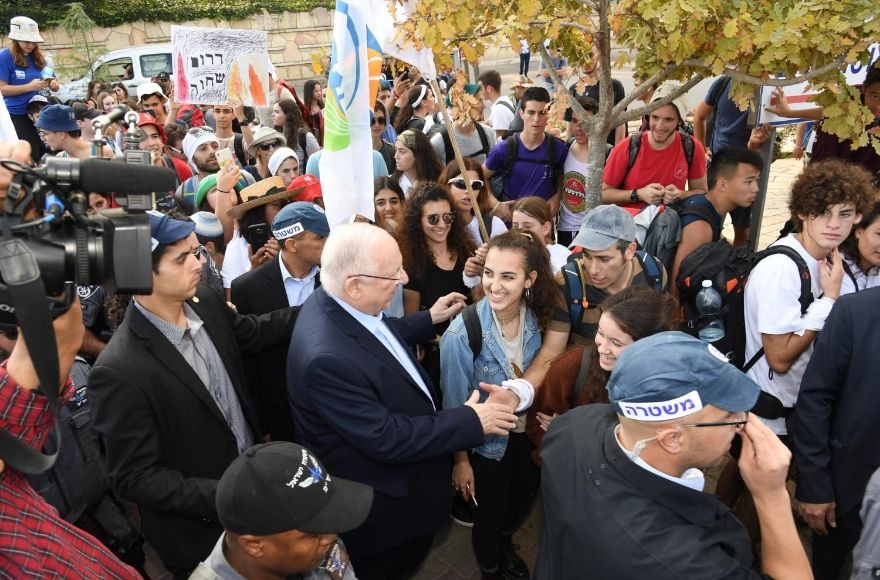 Teens from Gaza border communities meet Israeli President Reuven Rivlin in Jerusalem at the end of their 100-mile walk from Sderot in southern Israel. (Haim Zach/GPO)

JERUSALEM (JTA) — Some 6,000 high school students from Gaza border towns and their supporters reached Jerusalem on Thursday following a 100-mile march in what the teens said was an “apolitical” effort to effect change.

About 100 students began the march from Sderot, a southern Israeli town often targeted by Palestinian bombs, on Sunday, picking up supporters along the route. They wore T-shirts reading “Let us grow up in peace” and ended their march at the Knesset.

“Our message is that we want change. Enough of the current security situation,” Roei Rahaf of Kibbutz Mefalsim, a senior at the Shaar Hanegev regional high school, told Ynet at the start of the march. “Since we were born, we’ve been living from one war to the next. We want to grow up on the Gaza border in peace.

“The change is in the hands of the leadership in Israel, and that is why we are marching to the Knesset. This is a journey to raise awareness of what’s going on here, on the Gaza border; to tell our story, of the teenagers who deal with the difficult security situation.”

President Reuven Rivlin met the marchers when they entered Jerusalem.

“I came to march with you on behalf of every citizen of Israel who is following you and is marching with you in spirit,” he said.

“Happy is the people whose young people march at its head, and happy are the parents who raised their children with such a feeling of national pride, of love of the country, of such a meaningful connection to our wonderful country.”