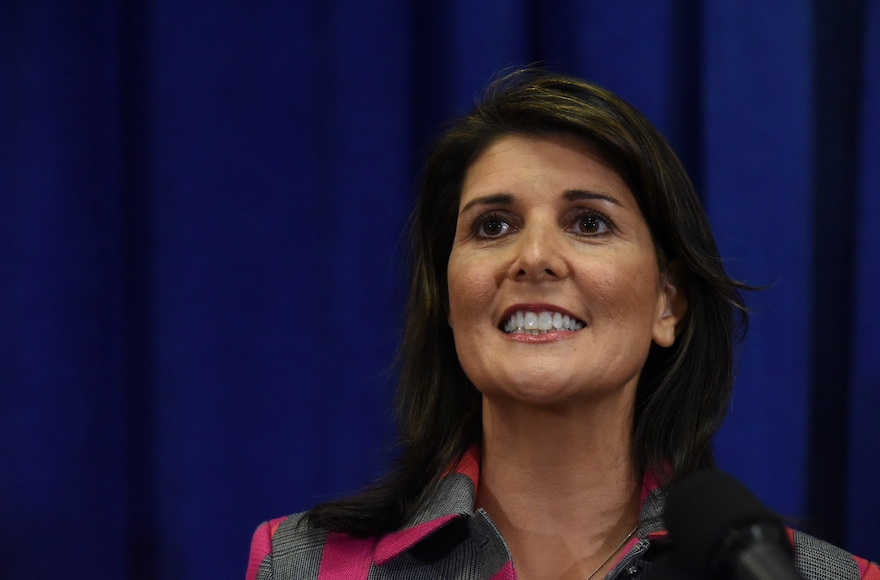 WASHINGTON (JTA) — When Nikki Haley said on Tuesday that she would be stepping down as U.N. ambassador by the end of this year, the Israeli and pro-Israel laments poured out swiftly.

Haley didn’t simply defend Israel and its government, led by Prime Minister Benjamin Netanyahu, as her predecessors had under Democratic and Republican administrations. She led a game change: On her watch, and with the blessing of President Donald Trump, support for Israel became a “with or against us” proposition. Slam the United States for defending Israel, and count on being slammed back, was the Trump-Haley credo.

A big chunk of Haley’s two years at the world body was about Israel.

“Thank you for your support, which led to a change in Israel’s status in the UN,” Danny Danon, Israel’s ambassador to the United Nations, said on Twitter.

Prime Minister Benjamin Netanyahu offered his gratitude as well in a statement.

“I would like to thank Ambassador @nikkihaley, who led the uncompromising struggle against hypocrisy at the UN, and on behalf of the truth and justice of our country,” he said.

Haley’s predecessors had also robustly backed Israel in the body, but there were hiccups. The latest came in December 2016 when Ambassador Samantha Power allowed through a Security Council resolution criticizing Israel’s settlement policy in the waning days of the Obama administration, about a month before Trump was inaugurated.

It was a rare instance of a U.S. official semi-endorsing U.N. criticism of Israel.

Netanyahu and the centrist to right-wing pro-Israel community sees the United Nations as a snake pit, and any concession is seen as a betrayal. That was the message in the American Israel Public Affair Committee’s farewell to Haley packed into a single word: “consistently.”

“We appreciate the strong leadership of @nikkihaley @USUN,” AIPAC said on Twitter. “Thank you for consistently standing up for America’s interests and our democratic ally Israel.”

Here are five times Haley changed the game for Israel while she was ambassador to the United Nations.

Israel and pro-Israel officials have long criticized UNRWA, the U.N. agency that administers assistance to Palestinians and their descendants, for what they say is a too-broad definition of what denotes a Palestinian refugee, effectively allowing the status to continue indefinitely.

Haley helped spearhead the Trump administration decision last month to sever funding to the agency. Last year, the United States contributed $360 million, the lion’s share of the budget. This year, after forking over $60 million, there was a freeze, and it became permanent last month.

Speaking in August at the Foundation for Defense of Democracies, Haley said the money could flow again — if UNRWA radically reconfigured how it counts refugees, slashing the number from 5 million to 500,000.

“We will be a donor if it reforms what it does,” she said of UNRWA, “if they actually change the number of refugees to an accurate account, we will look back at partnering them.”

Haley went to work and managed to get an impressive 64 members to not vote or vote against the resolution in the General Assembly. Then she invited them to a party.

“It’s easy for friends to be with you in the good times, but it’s the friends who are with you during the challenging times that will never be forgotten,” the U.S. mission said on Facebook in January. “Thank you to the 64.” 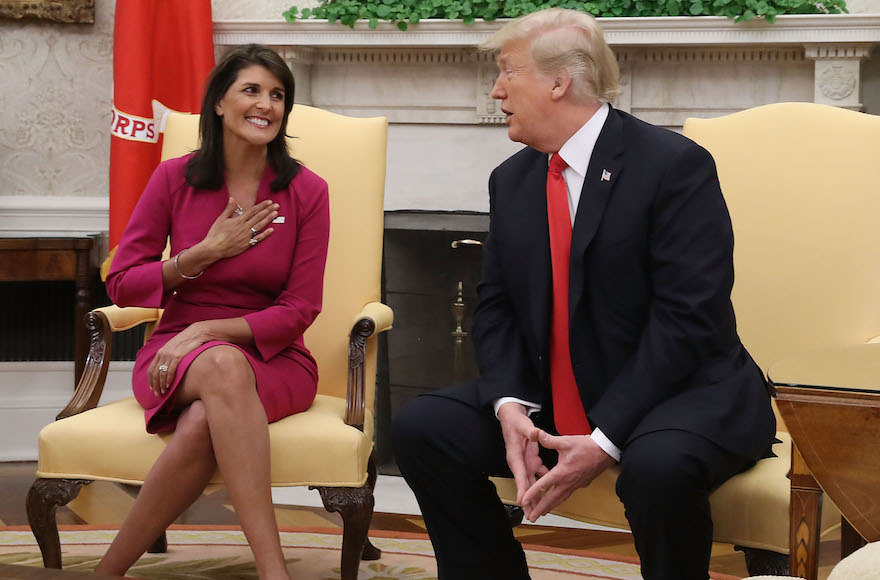 The United States Human Rights Council makes Israel a perennial agenda item, even as it includes among its members some of the world’s worst human rights abusers like Iran, China and Venezuela. The Obama administration repeatedly noted the anomaly, but it stuck with the council in order to nudge its members to condemn abuses in other countries.

Haley and the Trump administration stayed for 18 months before eventually concluding it wasn’t worth the insults. The body “was not worthy of its name,” Haley said at a joint appearance with Secretary of State Mike Pompeo in June.

The U.N. Economic and Social Commission for Western Asia published a report in March 2017 accusing Israel of apartheid. Haley, fresh to her role, made it a point to lobby the U.N. secretary-general, Antonio Guterres, to pull the report from the web. Guterres, no doubt wary of getting off to a wrong start with the Trump administration, pulled rank on the agency and the report was soon gone.

“That such anti-Israel propaganda would come from a body whose membership nearly universally does not recognize Israel is unsurprising,” Haley said before the scrubbing.

Praying at the Western Wall

Two months after the apartheid incident, Haley told the Christian Broadcasting Network that the Western Wall belonged to Israel, a sharp departure from longstanding executive branch policy of not pronouncing on who claims what in Jerusalem. By the end of the year, Trump recognized Jerusalem as Israel’s capital.

It was an early instance of Haley’s role as a smoke signal for a significant Trump administration shift in U.S. policy. She was tapped a year ago to signal that the Trump administration would pull out of the Iran nuclear deal and, as noted above, she set the stage for cutting off UNRWA funding.

Recognizing the Western Wall as Israeli seemed personal, however. Visiting Jerusalem a month after her CBN interview, she broke away from security to touch the holy site and ask worshippers how to pray.