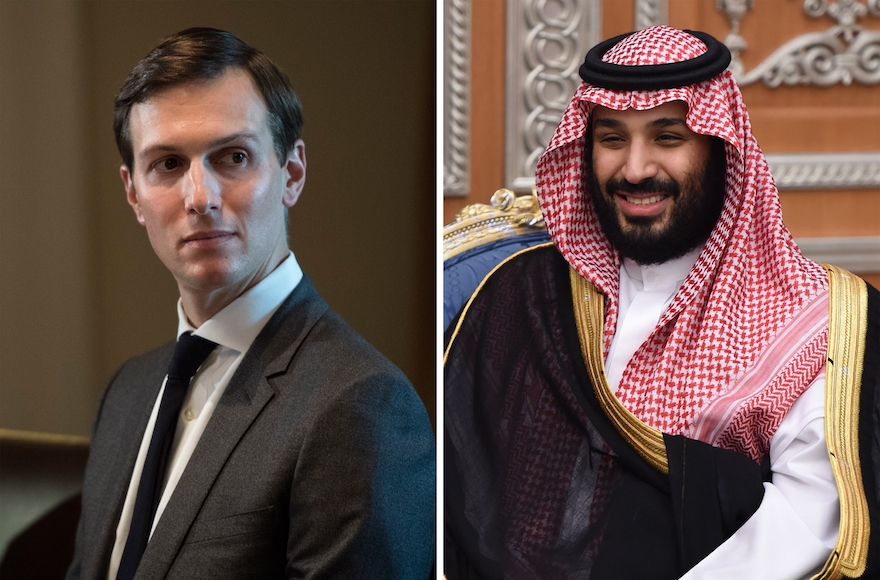 WASHINGTON (JTA) — In March, Saudi Arabia was on the brink of a new age of modernity. At the epicenter of the transformation were Prince Mohammed bin Salman and Jared Kushner, President Donald Trump’s son-in-law and top adviser.

But allegations this week that bin Salman — or MBS, as he is known — ordered the brazen murder of a dissident Saudi journalist in Istanbul, Turkey, have roiled the prince’s reputation as a modernizer.

So where does that leave Kushner, who cultivated a close friendship with MBS in part to advance Kushner’s efforts to revive the Israeli-Palestinian peace talks? Does Kushner counsel the president to distance the United States from Saudi Arabia? Or does he wait out the storm and return to the bromance when things are quieter?

Despite some favorable media coverage at the time of his last U.S. visit in March, much reporting suggested — even before the disappearance in Istanbul last week of Jamal Khashoggi, a permanent resident of the United States — that MBS’s reforms were more show than substance.

Yes, women could drive, but the activists who helped bring about the change were languishing in jail. Yes, he seemed ready for closer relations with Israel, while also bombing Yemen into submission, with little regard for civilian casualties. Yes, the extended Saudi royal family seemed on board with his changes, but maybe a period of imprisonment and torture in 2017 had something to do with that.

With the Khashoggi crisis in full bloom, the Trump administration is scrambling for a strategy. Trump himself is wary of penalizing a nation that spends big money on U.S. arms.

“I don’t like stopping massive amounts of money that’s being poured into our country on — I know they’re talking about different kinds of sanctions,” he said Thursday, referring to moves in Congress to sanction Saudi Arabia, “but they’re spending $110 billion on military equipment and on things that create jobs, like jobs and others, for this country.”

At the center of the U.S.-Saudi relationship is Kushner, whom Trump has tasked with relaunching the Israeli-Palestinian peace talks. The drive for a peace deal is what ostensibly brought Kushner and MBS together, but their relationship has broadened to include arms sales and regional strategy making.

Here are five key moments in the Kushner-MBS bromance.

According to The Washington Post, MBS and Kushner became friendly when the crown prince first visited Trump as president in March 2017. German Chancellor Angela Merkel was next on the agenda but was delayed by a snowstorm, which allowed the two 30-somethings to become acquainted. That set off a long distance relationship, with frequent phone calls, the Post reported.

Open arms and an arms deal

One result of the closeness was a major shift: A president’s inaugural trip has traditionally been to a neighbor, Canada or Mexico. Trump instead first headed to Saudi Arabia, in May 2017, and Kushner was instrumental in setting the agenda — so instrumental that he says he got a rabbi’s permission to join his father-in-law on the Shabbat flight. (Which rabbi? That’s still a mystery.)

The trip went off smoothly — remember that glowing orb Trump and MBS’s dad touched together? And Trump signed a $110 billion arms sale deal with the country.

Kushner visited with MBS in Saudi Arabia in October 2017, supposedly to discuss advance of the Israeli-Palestinian peace deal. A week or so later Saad Hariri, the Lebanese prime minister, turned up in Saudi Arabia to resign, citing the overweening influence in his country of Hezbollah, the Shiite militia aligned with Iran.

It was a bizarre moment, and soon Hariri was back in Lebanon having rescinded his resignation. What happened?

Hariri has close business and family relations in Saudi Arabia, and MBS may have coerced his resignation as a means of sowing chaos in Lebanon, which he reportedly hoped would spark a punishing Israeli assault on Hezbollah. No one told the Israelis and they were not game to be Saudi Arabia’s proxy in its longstanding dispute with Iran.

Did Kushner give MBS a green light? They chatted until 4 a.m. during the visit. We may never know what they discussed, but the proximity (and secrecy) of his visit so close to the Lebanon fiasco led to speculation that Kushner winked at MBS’s maneuvering. The crown prince arrested a bunch of his extended family at around the same time. That was the second round of arrests; the first was in June, soon after the Trump visit. Making matters murkier, Trump praised the prince for the arrests in a tweet.

Palestinian Authority President Mahmoud Abbas was summoned to Saudi Arabia the same month as Hariri, November 2017. What was said was not clear, but according to subsequent reports, MBS pressed Abbas to accept Kushner’s terms for a peace deal that would comprise a Palestinian quasi state with its capital in Jerusalem’s suburbs, as opposed to the city itself.

Abbas reportedly declined, and Saudi statements denied that MBS had ever embraced such a proposal.

A year after their snowbound bromance began, MBS was back in the United States for what was to be a turning point in the U.S.-Saudi relationship. He met with Trump, and Kushner helped organize a busy itinerary for the prince, including stops in high-tech centers on the East and West coasts to talk investment. MBS and his modernization proposals received glowing attention from influential columnists.

Marring the visit was the revelation, first reported at the time by The Intercept, that MBS told Persian Gulf buddies that he had Kushner “in his pocket.”

Is that the case? The Khashoggi mystery is not going away, and we may learn more soon.