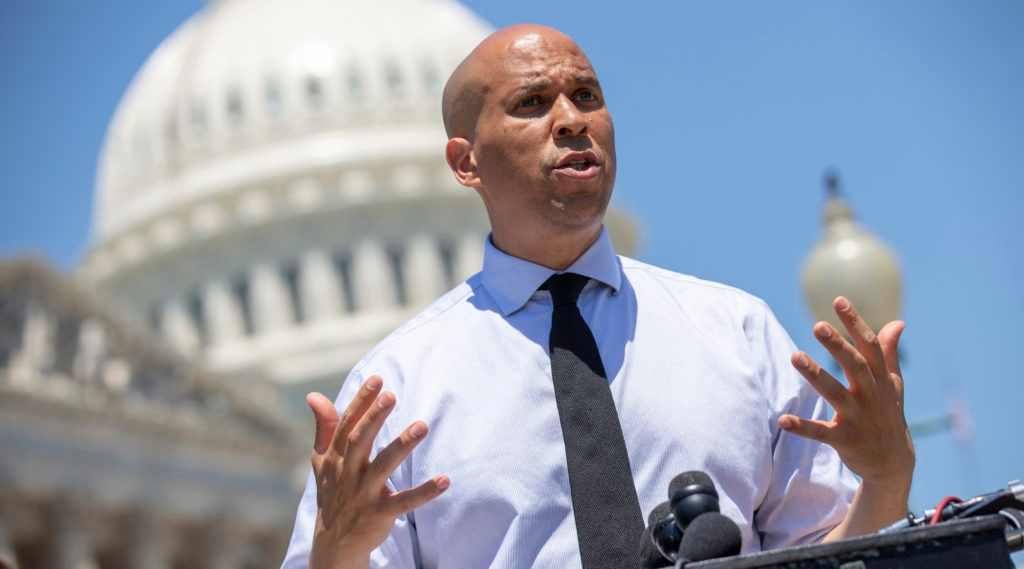 Here’s a start: The New Jersey politician literally carried a rabbi on his back until he (figuratively) cast same rabbi into the waters, like a forgotten sin.

Booker announced his presidential bid in a phone call on Friday morning, and was set for a campaign rollout on black and Latino radio (Friday is the first day of Black History Month, and Booker is African-American). His motto: “We will rise.”

The senator’s rise to fame has been full of headlines. He was a heralded football player in high school who failed to live up to his billing at Stanford, and he is a former mayor of Newark who rescued a woman from a fire and a dog from freezing temperatures. Booker was at the center of a bizarre non-scandal during last year’s Senate hearings confirming Brett Kavanaugh as a Supreme Court justice after leaking embarrassing emails from Kavanaugh’s career as White House counsel to President George W. Bush.

Booker proudly said he was breaking Senate protocol by doing so, inviting the Senate to censure him, and calling himself “Spartacus.” The committee’s Republican chairman, Sen. Chuck Grassley of Iowa, said, basically, no harm, no foul — Booker had not actually violated protocol. That settled that — except no one has yet to figure out the Spartacus reference.

Booker champions reforming the justice system and has been known to play nice with Republicans — in 2012 he criticized the Obama campaign for demonizing Republican nominee Mitt Romney’s background in capital investment.

He’s 49, not married and a vegan — that should take care of the non-Jewish stuff. Now let’s dive in:

1. He keeps a Hebrew Bible on his desk.

OK, Booker also keeps the New Testament, the Quran and the Bhagavad Gita, according to this 2013 Tablet profile, but as keen-eyed author Yair Rosenberg notes, the senator’s is not just any Tanakh — it’s an ArtScroll, which rhymes with “hardcore” for those who know from serious Bible study.

A friend invited Booker, a Rhodes scholar at Oxford University, to an event at L’Chaim, the university’s Jewish society. The friend didn’t show, but Booker quickly bonded with the group’s founder, Rabbi Shmuley Boteach, and they became fast and longtime friends.

Booker, a Baptist, went on to become president of L’Chaim.

“I would give him Baldwin and DuBois,” Booker told The New York Times in 2002 during his first run for Newark mayor, describing his relationship with Boteach, “and he would give me Hillel.”

There’s video of a Purim party from the early 1990s with Boteach, wearing an outfit that appears to be decorated with pizza slices, riding on Booker’s back.

The boys went on to glory — Booker in 2006 winning the job of Newark mayor (he had lost the 2002 race) and Boteach writing manuals on “kosher sex” (what “kosher sex” is, exactly, remains as mysterious as Spartacus.)

Things went south in 2015 when Booker, a senator since 2013, backed the Iran nuclear deal and Boteach, who saw the deal as an existential threat to Israel, was heartbroken — and very publicly heartbroken in blogs, on Twitter and on the phone with whomever would listen.

Boteach was even more heartbroken when Booker did not mention him in his 2016 book “United,” on bringing Americans together.

“The book is not about my relationships with lots of friends or even different communities, such as the Latino community which embraced me, that have been impactful,” Booker told HuffPost. “He certainly was impactful. It’s not about that. It’s a book about a specific path. I am not sure why he’s reacting the way he is.”

3. He does Jewish weddings.

OK, he does them for his former chief of staff, Matt Klapper, who is now a senior adviser to his presidential campaign. Booker participated in the exchange of vows at Klapper’s 2016 wedding to Victoria Edelman.

Booker likes to open his speeches, to Jews and non-Jews alike, with Torah analysis — and he likes to make a big deal about how weird it seems.

Two years earlier he told Chabad of Greenwich, Connecticut, that “a tall black man from New Jersey” is about to talk about the week’s parsha. He advised the crowd to “get over it.”

The senator also likes to intimidate Jewish journalists with his knowledge.

“Booker at points seemed to know more about my Jewish culture than I did,” Jonathan Tepperman wrote in a 2002 profile in The New York Times Magazine.

“I’ve met most of the Senate’s other Jews, and I can say with a high degree of certainty that Booker knows more Torah than they do,” Jeffrey Goldberg, now editor of The Atlantic, wrote in the New York Post in 2013.

In his first run for Newark mayor in 2002, when he tried to unseat incumbent Sharpe James, rumors circulated that Booker was a front for Jewish interests — and even that he was Jewish.

5. He changes his mind on Israel boycott laws.

Booker equivocated a long time before deciding to sign on to legislation last year that would penalize businesses that comply with Israel boycotts. Some of his fellow Democrats are concerned that the bills would impinge on speech freedoms. In fairness, he’s not alone: Another senator in the running for president, Kirsten Gillibrand of New York, at first backed the anti-boycott bills, and now opposes them.

At a conference for progressives last year, Booker posed with an activist holding up a sign saying “From Palestine to Mexico, all the walls have got to go.”

“He didn’t have time to read the sign, and from his cursory glance he thought it was talking about Mexico and didn’t realize it had anything to do with Israel,” a spokesman told JTA at the time.