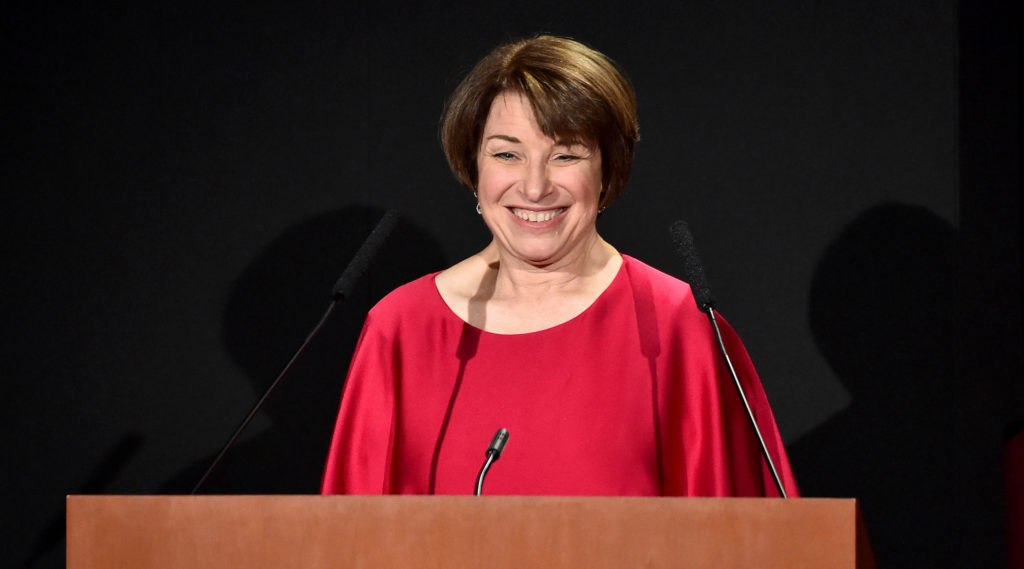 WASHINGTON (JTA) — The race for the Democratic presidential nomination is starting to look like a CNN panel — more people fit than you think possible.

Up next is the nice one: Sen. Amy Klobuchar of Minnesota. She’s committed to bipartisanship, close to Republicans like her late Senate colleague John McCain from Arizona and John Hoeven from neighboring North Dakota.

Klobuchar, 58, said this week that she has a big announcement coming Sunday, and if as expected she’s running in 2020, she will be the ninth major declared candidate in her party going for the White House — plus there are a number of other likelies.

She stands out for her grace under fire. That was apparent in September when she probed Supreme Court justice nominee Brett Kavanaugh about his past experiences with alcohol.

Klobuchar asked Kavanaugh about whether he ever blacked out while drinking. He barked back at her, “I don’t know. Have you?”

She had just described her own father’s struggles with alcohol and did not flinch.

“I have no drinking problem, Judge,” she said, not raising her voice. After a break, Kavanaugh apologized.

Among Klobuchar’s pluses, she consistently wins elections by wide margins in a state that otherwise wavers between parties. Minnesota is neighbor to Iowa, the first nominating contest. Her pleasant and easy bipartisanship provides a stark contrast to President Donald Trump’s angry partisanship.

That last one, however, could also be a minus: Trump’s election revealed a taste in the electorate for devouring the nice.

She’s from a state with a small Jewish population — estimated to be less than 50,000 — but with an outsize presence in the state. That includes four Jewish senators — two Democrats, two Republicans — in the postwar period and two presidential nominees, Hubert Humphrey in 1968 and Walter Mondale in 1984, vice presidents who had strong ties to the national Jewish and pro-Israel communities.

Klobuchar, who is of Slovenian descent, likes to joke about how often she’s asked if she’s Jewish. No, but here are five things about her that are.

She made her name in Jewish Minnesota.

“She’s ubiquitous in the Minnesota Jewish community,” said Steve Hunegs, the executive director of the Jewish Community Relations Council of Minnesota and the Dakotas.

Klobuchar never turns down an opportunity to speak to the community, Hunegs said, and has featured more than once at events of the Jewish Council for Public Affairs, the umbrella body for JCRCs and public policy groups. A year ago she chaired the annual off-the-record meeting between Senate Democrats and Jewish groups, a spot reserved for senators especially close to the community.

“She’s deeply popular among Democrats and Republicans” in the Minnesota community, Hunegs said.

Her ties to the community go back to the 1980s when Hunegs, then a law student, first befriended Klobuchar, a young lawyer, but were consolidated in 1998 when she was elected County Attorney of Hennepin County, where the bulk of the state’s Jews reside. (The county seat is Minneapolis.)

A mentor had been longtime state Democratic legislator Gloria Segal, who died in 1993, and Klobuchar remains close to her daughter, Minneapolis City Attorney Susan Segal.

Hunegs pointed out that as senator during the Obama administration, she nudged along the federal appointments of Jewish Minnesotans Andy Luger to become U.S. attorney in the state and Sam Kaplan as ambassador to Morocco. (Presidents look to senators of their own party to recommend officials from their states.)

Speaking last March at the annual conference of the American Israel Public Affairs Committee, Klobuchar relished telling how in a meeting with Benjamin Netanyahu, the Israeli prime minister lavished more attention on her than her colleague from New York, Kirsten Gillibrand.

“He was noting to me that he has a lot of relatives in Minnesota and he had been there,” she said. “He said when I got back to our state I could tell them that I had met with the Israeli prime minister of Minnesota. That was kind of amusing, but what’s most amusing is he said it to me as I was sitting next to the senator from New York.”

Identification with Jews extends back generations. In her autobiography, “The Senator Next Door,” Klobuchar writes how her grandmother, Mary, seeking to nudge her son Jim — Klobuchar’s father — toward a career, touted a boy who had come from their town, Ely. Simon Bourgin was making a name for himself as a journalist.

“Simon’s family also lived in the Slovenian part of town — they had come from Russia, and they were one of only six Jewish families in Ely,” Klobuchar wrote. “The way my grandma saw it, if Simon could do it, Jimmy could, too.” Jim Klobuchar made a career as a journalist.

She is the only one of seven presidential hopefuls who voted with AIPAC on an anti-BDS bill.

Among the seven declared or presumed presidential candidates in the Senate Democratic caucus, Klobuchar was the only one who voted Tuesday to approve a law that would consolidate $38 billion in defense assistance for Israel while protecting states that penalize businesses that boycott Israel. The entire caucus voted 25-22 in favor of the bill.

Democrats who oppose the bill back the defense assistance and oppose the Boycott, Divestment and Sanctions movement targeting Israel, but say that penalizing boycotters impinges on speech freedoms. (The six presidential potentials who voted no were Elizabeth Warren of Massachusetts, Kirsten Gillibrand of New York, Cory Booker of New Jersey, Kamala Harris of California, Bernie Sanders of Vermont and Sherrod Brown of Ohio.)

AIPAC lobbied hard for the bill, and getting a majority of Democrats — even a scant one — was a win for the lobby, which stresses bipartisan support for Israel. (All but one Republican voted for the bill.)

One of the first signals that Klobuchar was considering a run was her featured appearance last March at the AIPAC conference. She explained her affection for the lobby in Minnesota terms: She liked its bipartisanship, and said it was important in a polarized environment to have a community that stood for its bottom-line values but was otherwise ready to reach out and work with others.

“A lot depends on the Jewish community in America because I believe that you can find common ground while still standing your ground,” she said.

She’s a go-to Democrat for the Orthodox.

Orthodox umbrella groups increasingly embrace policies (on Israel’s hawkish government, abortion and other social issues) that hew closer to the American right, but also endeavor to sustain friendships on both sides of the aisle.

They prize someone like Klobuchar, who unlike some colleagues in her caucus is not a fundamentalist on separating church and state and has advocated federal funding for the religious sector, including for energy efficiency and school safety.

She tried to explain feather boas to Ariel Sharon.

Klobuchar’s first visit to Israel was in 2005, when she was contemplating her first run for the Senate. Then-Prime Minister Ariel Sharon explained to her group that he had broken away from the Likud party after decades of devotion to its cause to establish a centrist party, Kadima.

Klobuchar explained how Minnesota had recently opted for a centrist path as well, in 1998 electing Jesse Ventura on the Reform Party ticket.

Sharon got it and listened with interest until Klobuchar tried to describe Ventura’s earlier career as a pro wrestler whose signature accoutrement was a feather boa.

“Sharon did not appear to grasp the concept of a feather boa, and after pursuing the matter with his translator, Sharon still didn’t seem to get it, Klobuchar said,” the Star-Tribune reported at the time.

She stood by Al Franken until he stood down.

Klobuchar is close to Franken, the Jewish Democrat who resigned from the Senate at the beginning of 2018 after multiple women said he had groped them when he was a comic and writer.

Klobuchar refused to join a number of women in the caucus demanding that Franken quit. (Gillibrand led the call, and some in the party have yet to forgive her for it.) Instead, she counseled him in private.

“I felt I was in a different role as his colleague, that I’m someone that has worked with him for a long time, there’s a lot of trust there, and I felt it was best to handle it in that way,” she told CNN at the time.

And last April, Klobuchar said Franken, who had achieved success in comedy and as an author, is ready for a comeback.

“He’s had two acts and he’s still going to have a third,” she told a forum.