(JTA) — Motorcyclist Steve Goode is on the way to Zingerman’s Deli in Ann Arbor, Michigan. But on a recent phone call from a hotel room, he doesn’t know exactly where he is.

Turns out he’s in Richmond, Indiana, a few days into a 75-day trek called the Great American Deli Schlep, during which he will stop at 41 Jewish delis across the United States to raise awareness about hunger and food insecurity. He started out at Manny’s Cafeteria and Delicatessen in his native Chicago, then hit Shapiro’s in Indianapolis, then Stevens & Stevens in Louisville, before turning around to go back up to Michigan. It’s all part of a meticulously mapped-out sequence that will bring him in contact with every state in the continental U.S.

Goode, a retired real estate developer and longtime cross-country biker, was inspired to organize the schlep by a map of the country’s best Jewish delis compiled by The Nosher in 2018. He partnered with Mazon — a Jewish nonprofit working to combat hunger — to help with the logistics and getting the word out. 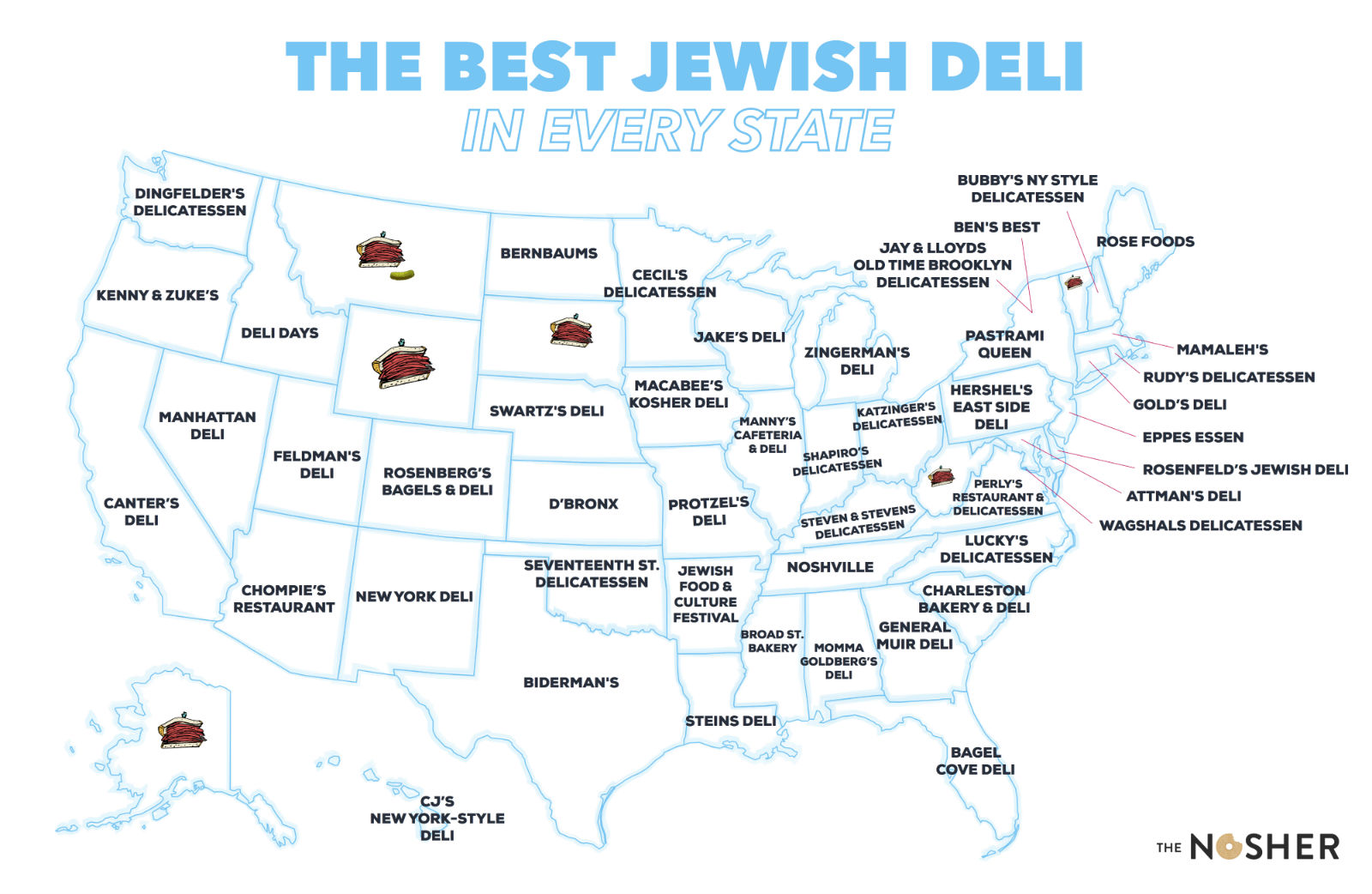 This map, produced by The Nosher in 2018, was Steve Goode’s starting point when planning The Great American Deli Schlep. (Nosher)

On each stop, he tries to meet with the deli owners for conversation and photo ops — some have been wary to connect with him because they think he’s going to ask them for money for the cause, which he’s not. He’s well aware of how the COVID crisis battered restaurants — even many of the well-known delis on his list, like Katz’s in New York and Canter’s in Los Angeles — in addition to low-income families and service industry workers.

“Before the pandemic, the number [Mazon talks] about is like 38 million people are food insecure, which means at some point during the year, they didn’t know where their next meal was coming from, or how they were going to feed their families,” Goode said. “That has jumped, according to Mazon, to about 80 million” during the pandemic.

He’s also hoping to meet with locals who can follow his trip in blog form on Mazon’s social media pages, and to ride into town with local chapters of the Jewish Motorcyclists Alliance — a national network of groups of Jewish motorcycle aficionados, with names such as the Chaiway Riders (Goode’s Chicago club) and Hillel’s Angels in New Jersey. He wants the New York City branch to help him navigate the Manhattan traffic he finds intimidating on his way to Katz’s on his 2018 Honda Goldwing Tour bike.

“Yeah, that’s going to be a frightening ride,” he said.

Goode, 66, who has served on the board of his Reform synagogue, B’nai Jehoshua Beth Elohim in Deerfield, Illinois, and helps organize the Greater Chicago Jewish Festival, has been in love with motorcycle touring since high school. In 2013, he touched all four corners of the continental U.S. The following year he touched all 48 states. In 2017 he visited all 47 national parks.

The Deli Schlep has been the most challenging to plan, he said, in addition to the most rewarding. He credits his wife Judi, who used to accompany him on some of the excursions, with reaching out to Mazon with the idea, because he admits she is even more involved in Jewish causes. (Although she’s not with him on the Deli Schlep, they talk several times a day through the Bluetooth system he set up in his helmet, and have dinner together on Zoom each night.)

Goode has also already observed some pandemic-era changes on the road, too. “I don’t know if the beards are longer because of COVID. They appear to be, though. A few more tattoos, too,” he said.

As for the delis he’s most looking forward to visiting, he said he’s heard a lot about Canter’s in L.A. and Corky & Lenny’s near Cleveland, which have slung Jewish sandwiches since 1931 and 1956 respectively — but he’s having trouble tuning out the many suggestions of his friends, who he says clearly aren’t looking at the map he and Mazon took meticulously planned. Two Jews, several Jewish deli opinions.

“Every friend of mine who lives somewhere outside of Chicago, even in Chicago, has an opinion. Surprise, surprise. So when they start yelling at me about, you know, this deli is not as good as this deli, you should be going to visit this deli in New York and this in Boston, I’m like, guys, stop. This list was assembled by Nosher magazine. I’m just riding … I mean, that’s the one thing everybody’s got an opinion about: food.”

The Jews of Key West: Making a home again in Margaritaville