4 Jewish baseball players make a play for the World Series 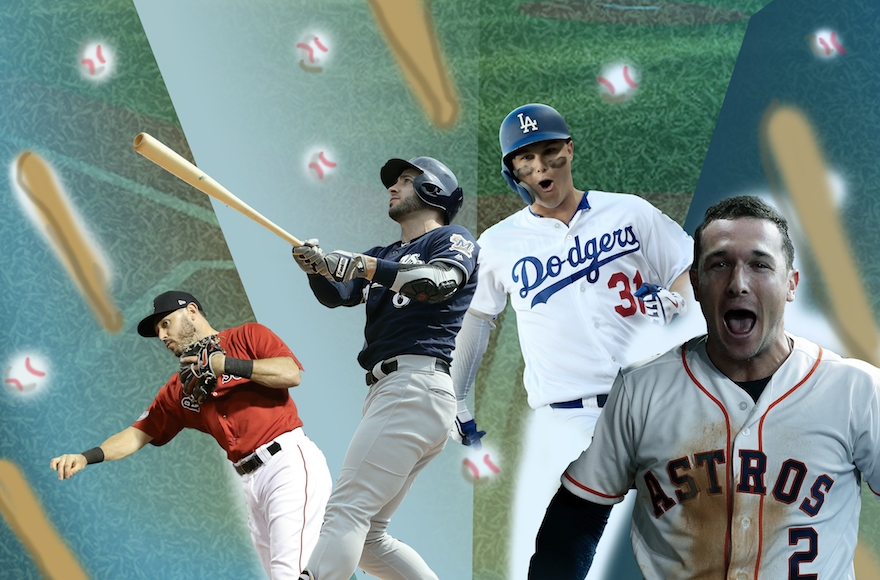 NEW YORK (JTA) — Alex Bregman and Joc Pederson are looking for a return to the World Series. Ian Kinsler and Ryan Braun are trying to block their paths.

The four Jewish players are on teams vying in their respective League Championship Series for the right to move on to baseball’s Fall Classic.

Bregman was a second-year player a season ago when the Houston Astros took the Series over Pederson’s Los Angeles Dodgers in seven games. Along the way, they each established several World Series marks for Jewish players: the first from opposing teams to hit a home run; most homers in a Series (Pederson, 3, surpassing Hall of Famer Hank Greenberg) and the first to have a walk-off hit (Bregman in Game 5).

The Astros are back in the American League Championship Series against the Boston Red Sox, who acquired Kinsler late in the season from the Detroit Tigers.

In the National League, the Dodgers will take on Braun’s Milwaukee Brewers in the championship series. The Dodgers, meanwhile, are run by Andrew Friedman, their president of baseball operations, who is Jewish.

The N.L. series starts Friday night in Milwaukee, while the A.L. kicks off the following night in Boston.

Let’s take a look at the four players, who this season made news when they were among five Jewish major leaguers to slug home runs on the same day – the fifth was Kevin Pillar of the Toronto Blue Jays. 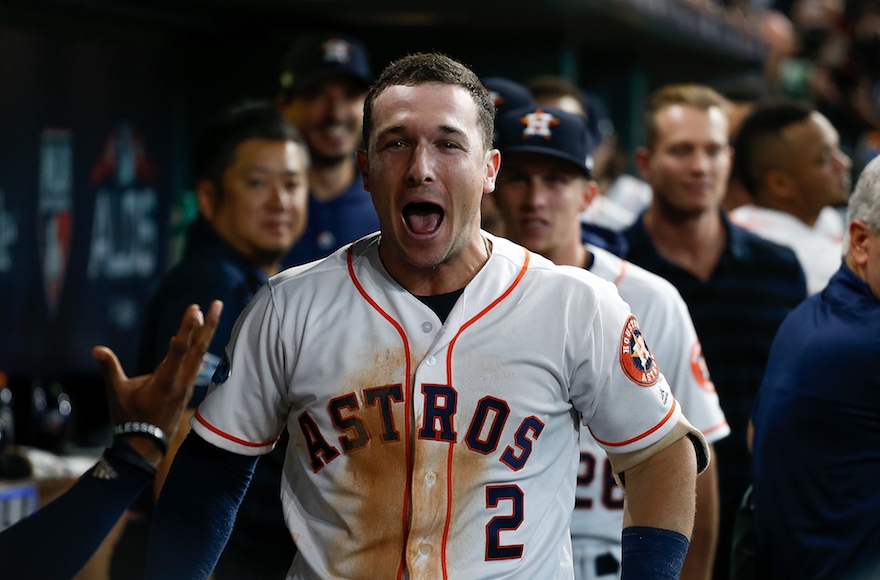 Alex Bregman reacts in the dugout after hitting a home run in the second game of the American League Division Series against the Cleveland Indians at Minute Maid Park in Houston, Oct. 6, 2018. (Bob Levey/Getty Images)

Alex Bregman, a third baseman, has taken the mantle from Braun, a one-time Most Valuable Player, as the best Jewish major leaguer playing now. In his third season, the power-hitting righty has realized his potential as a former No. 2 overall draft pick as a shortstop out of Louisiana State. Bregman, 24, slugged 31 homers, as well as 51 doubles, and drove in 103 runs this season to power the Astros to the AL West title. He added two more home runs in the three-game sweep of the Cleveland Indians in the Division Series. And by the way, he was the MVP of his first All-Star game — the first Jewish player to win the award since it was instituted in 1962 — blasting the game-winning homer.

Off the field, his foundation, AB for AUDS provides computer tablets to children with autism and Down syndrome. His mother, Jackie, told JTA before the start of the season that she knows the “Jewish community around the country is so proud of him.” 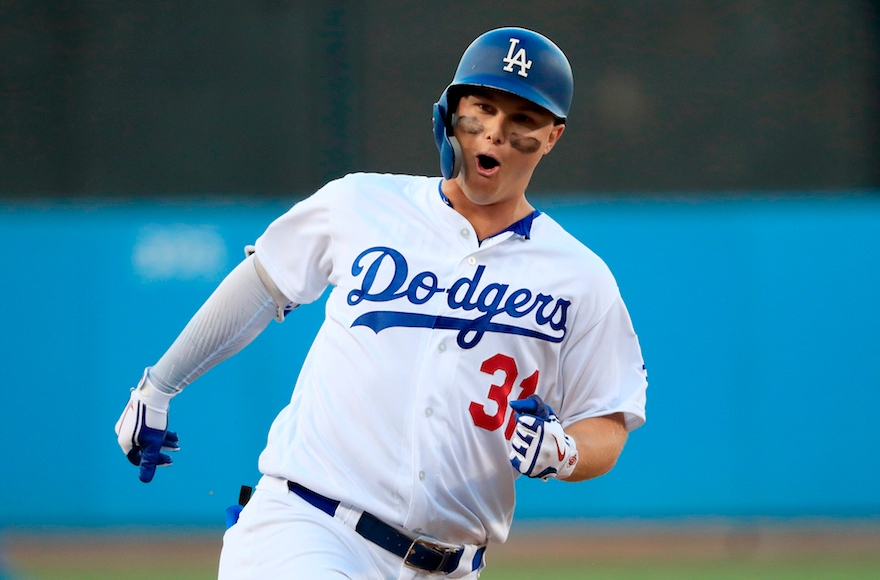 Joc Pederson, a lefty-swinging outfielder, smacked 25 homers and had 56 runs batted in to help the Dodgers take the N.L. West, beating the Colorado Rockies in a one-game playoff, before defeating the East champion Atlanta Braves 3 games to 1 in the division series. He led off the Atlanta series with a homer after setting a team record this season with eight leadoff long balls. Pederson, 26, rebounded from a subpar 2017 campaign in which he hit 11 homers and batted .212. The highly touted prospect was an All-Star in his rookie season, 2015, when he pounded 20 of 24 homers before the break, and as a 20-year-old in the minors played for Israel’s team in the World Baseball Classic. His father, Stu, also played in the majors. 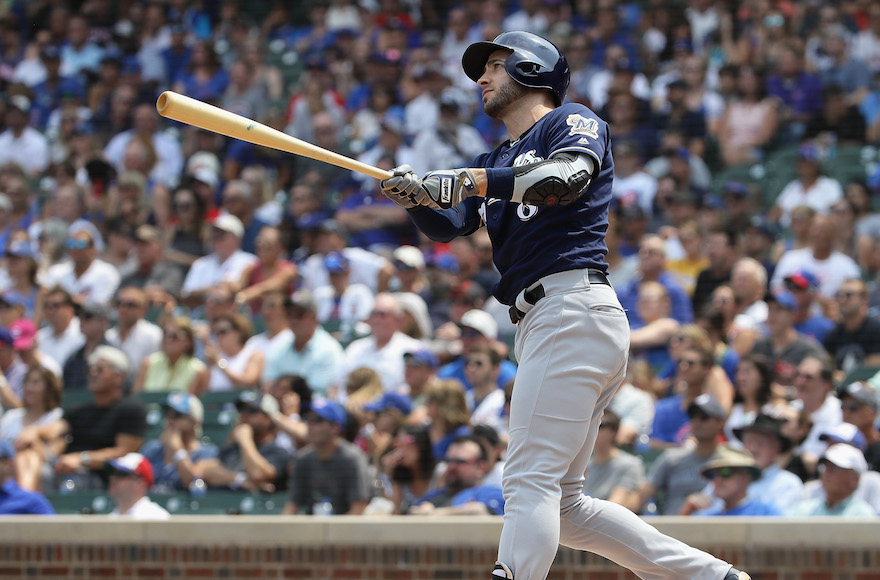 Ryan Braun, like Pederson an outfielder, but a right-handed batter, is a six-team All-Star who won the MVP in 2011 and Rookie of the Year in 2007. Braun isn’t quite at that level anymore, when he was known as the “Hebrew Hammer.” But he did crack 20 homers and drive in 64 for the Central Division champs, who beat the Chicago Cubs in a one-game playoff for the crown. The Brewers advanced to the NLCS by sweeping the Colorado Rockies in three games. Braun, 34, is the son of an Israeli-born Jewish father and a Catholic mother. 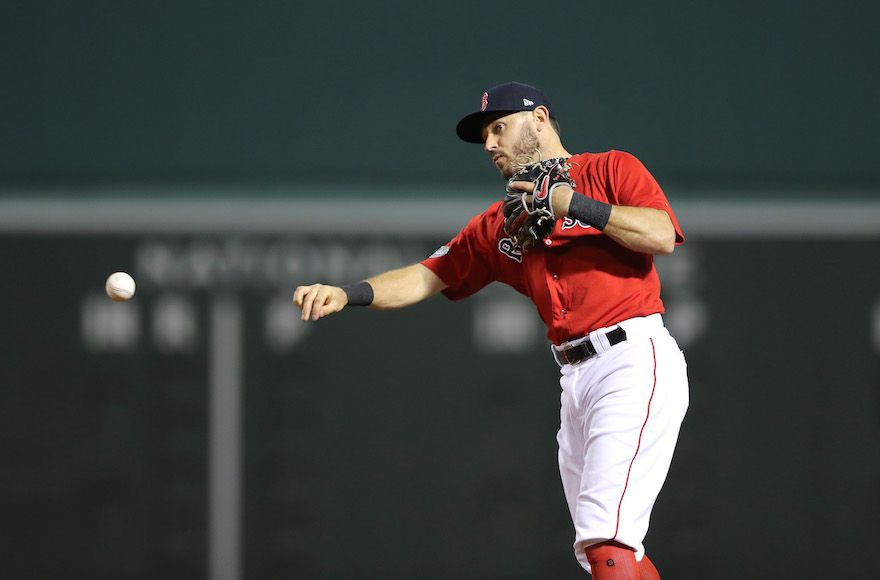 Ian Kinsler fields a ground ball during the second game of the American League Division Series against the New York Yankees at Fenway Park in Boston, Oct. 6, 2018. (Elsa/Getty Images)

Ian Kinsler, a 36-year-old righty, was brought to Boston — his fourth team in a 13-year career — to solidify second base. Combined this season, the four-time All-Star has 14 homers as well as 16 stolen bases while playing a strong infield. His contributions helped the Red Sox to a team record 108 wins and the A.L. East title before they knocked off the rival New York Yankees 3 games to 1 in the division series. He is the son of a Jewish father and Catholic mother.