BERLIN (JTA) — Last year, as Rabbi Rebecca Blady approached the first anniversary of the Yom Kippur attack on a synagogue in Halle, Germany, she knew she wanted to commemorate it on her own terms.

Blady runs Base Hillel Deutschland, an organization for young Jews in Berlin, and was praying in the Halle synagogue on Yom Kippur in 2019 when a gunman attempted to break down the door. The gunman then went on to kill two people nearby, and is now serving a life sentence in prison.

Rather than suffice with the state-organized memorial on the attack’s secular anniversary of Oct. 9, Blady decided to place Judaism at the center of her commemoration — and to build bridges with other communities impacted by extremism. Together with other local organizations, Base Hillel put on a “Festival of Resilience,” a series of events celebrating how her community and others have persisted in the face of hate.

“We wanted it to be about our community, to find a way also to empower ourselves from within a comfortable community space,” Blady said. “We want to build coalitions. We want to share stories.”

Now in its second year, the Festival of Resilience feels more like a celebration of Jewish life than the memorial of a somber occasion. Blady intentionally structured it around Sukkot, the weeklong Jewish holiday that follows Yom Kippur, during which Jews traditionally eat and spend time in a sukkah, or temporary hut.

This year, the festival began on Sept. 19 with a sukkah-building program, and also included TischreiFest, a party named after the current month in the Hebrew calendar. It closes on Oct. 6 following a workshop titled “Jewish and Intersectional.”

The centerpiece of the festival was the Ceremony of Resilience on Sept. 23, during which survivors of far-right extremism and their relatives were invited to speak, including the survivor of a deadly arson attack targeting a Turkish family in 1992 and the mother of a victim of the anti-immigrant shooting in Hanau on Feb. 19, 2020, just months after the Halle attack.

Despite the memorials, the ceremony had a pre-concert ambiance, with the empty stage playing quiet background music as people filed in, grabbing a beer with a free drink ticket and taking a seat at one of the scattered picnic tables. A light drizzle started and stopped, with just a few drops sprinkling through the roof of the sukkah, which stood near the stage. 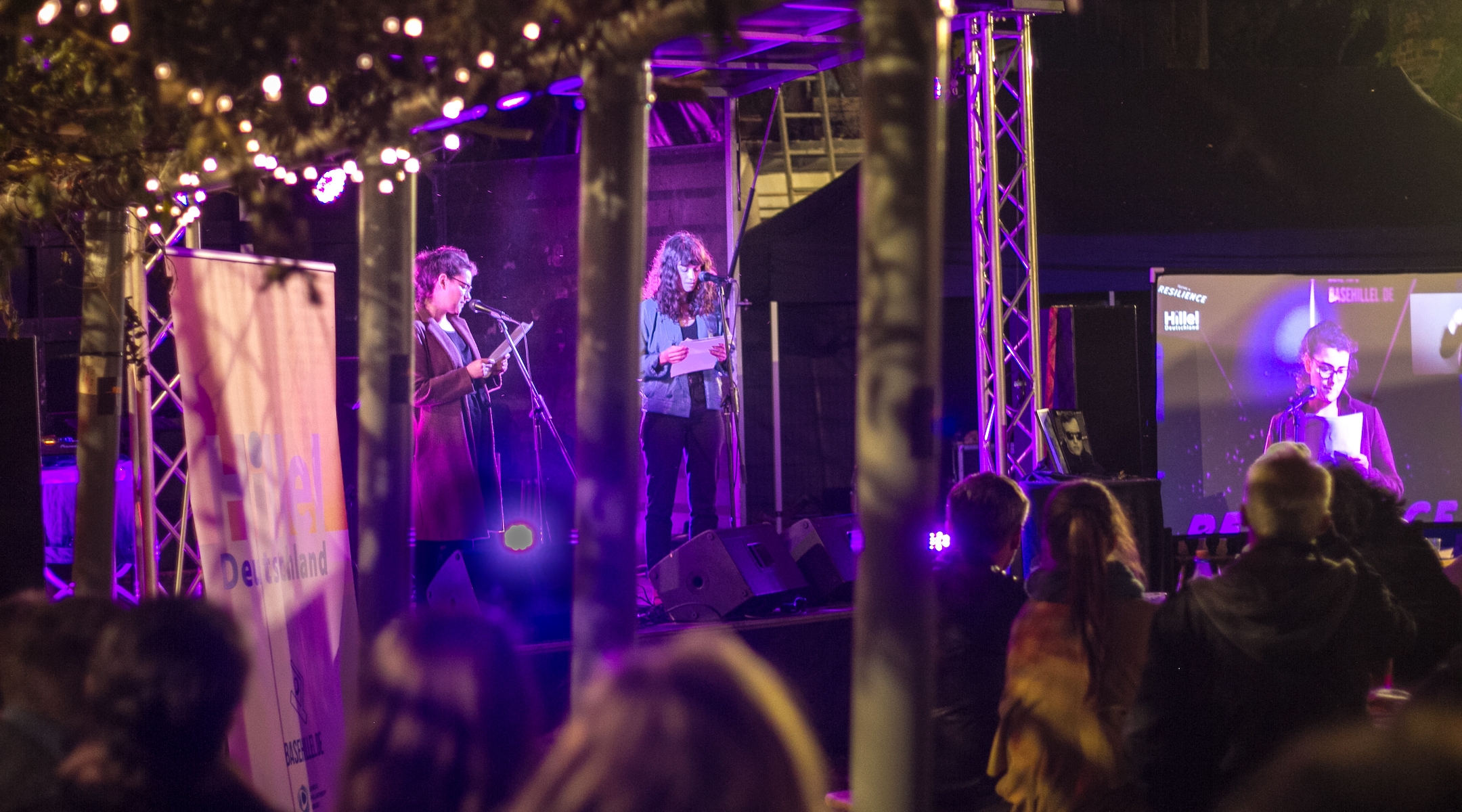 Survivors of the Halle attack share their experiences at the Festival of Resilience. (Debi Simon for Hillel Deutschland)

Blady said part of the festival’s purpose is to reclaim the holiday season that the gunman tried to terrorize in 2019.

“This gathering, much like the process of 25 hours of prayer and fasting that we have on Yom Kippur, is about transforming memory into something that can be witnessed, something tactile, fragrant, real,” Blady said at the ceremony. “Here we are two years past our tragedy. In the sukkah, we stand in an actualized symbol of our protection with symbolic fruits and plants to remind us of the goodness of the world.”

Beyond celebrating Jewish life, the festival has grown into an activist hub to turn shared grief across communities into learning and action against far-right extremism. Mischa Ushakov, a former board member of the Jewish Student Union in Germany, another of the festival’s organizers, called the festival an “intersectional space” that “has become an institution in the Berlin Jewish calendar.”

“[Blady] sent a very strong sign of solidarity for our communities in general,” said Reuben Gerzikow, another former Jewish Student Union board member. “But it’s also a sign that our society will not break apart from far-right attacks, that we are standing together as victims, as marginalized groups.”

At the festival last year, some attendees found it difficult to celebrate, said Anastassia Pletoukhina, another survivor of the Halle shooting who works for the Jewish Agency for Israel, and who also spoke at the ceremony.

“Last year was very painful and healing at the same time because we were in the middle of the trial against the perpetrator,” she said. “Everything was on the surface, all the emotions, all the fears, all the trauma and re-traumatizing experiences within the group and the group of survivors from Halle.” 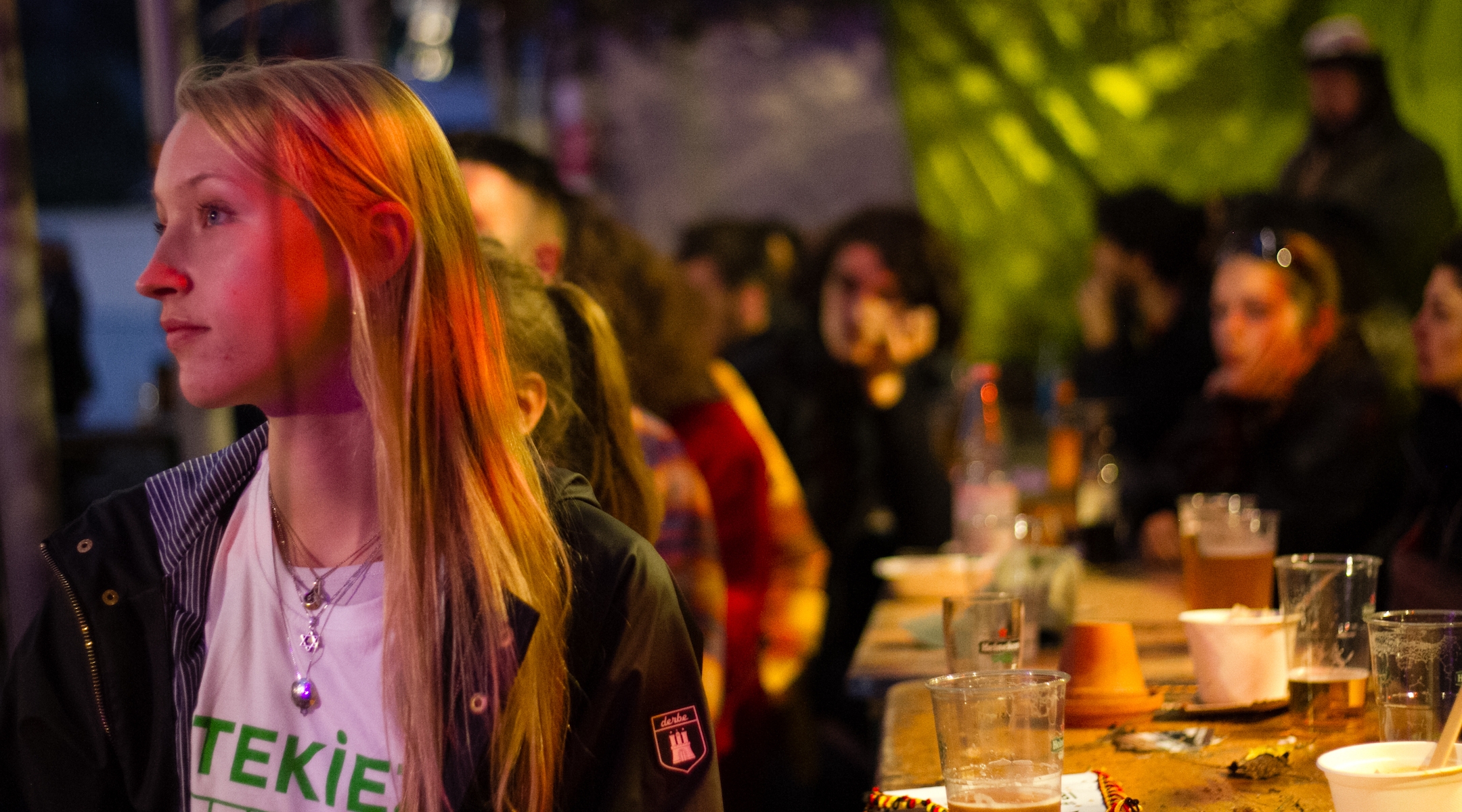 This year, she said, it feels different. While the festival naturally mixes celebration with mourning, Pletoukhina said survivors of the Halle attack have developed a camaraderie with other survivors of racism and antisemitism.

“It was very painful to hear stories from mothers who lost their children to terror,” she said. “At the same time, to know that we are not alone in this fight and we can actually do something together was very empowering for me.”