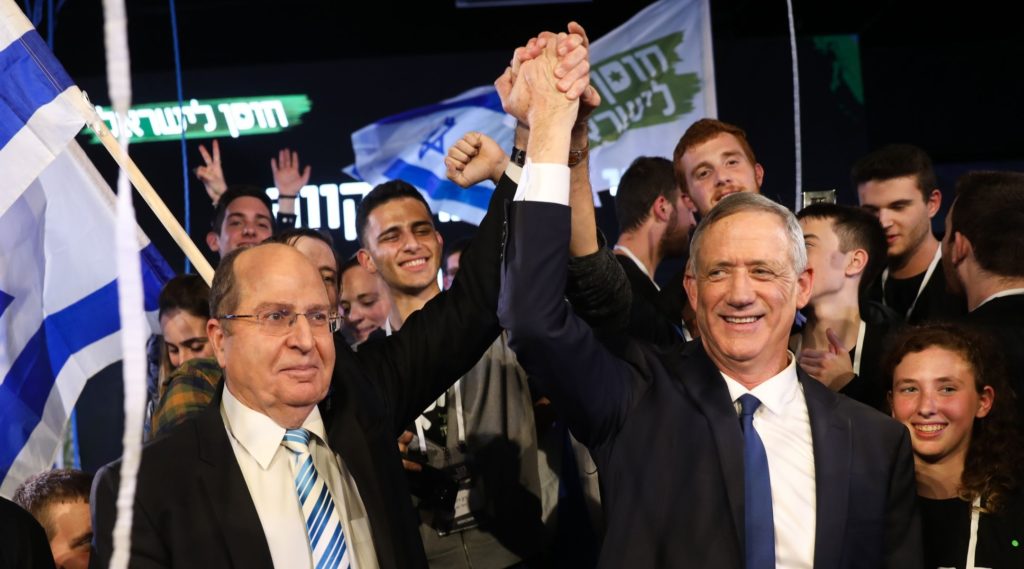 Benny Gantz, a former head of the Israeli army, announced Tuesday that he will combine his new political party, Israel Resilience, with one led by fellow former Israel Defense Forces chief of staff Moshe Yaalon.

This is a significant partnership: Since its formation last month, and before he issued any kind of political platform, Gantz’s party has been polling second behind Netanyahu’s ruling Likud party. Yaalon, Netanyahu’s former defense minister, is, like Gantz, a popular figure.

Together, they hope to unseat Netanyahu from power. His Likud party could take as many as 30 seats in the April 9 elections.

Gantz’s party looks to garner up to 15 seats, polls show. Yaalon’s Telem party has not polled above the electoral threshhold to gain a seat.

Gantz made the announcement on Tuesday night while officially launching his Israel Resilience Party’s campaign in Tel Aviv. Yaalon, whose nickname is Bougie, joined Gantz at the end of his speech. Gantz called Yaalon “a man of values, my former boss and my new partner.”

Gantz told a crowd of supporters chanting “Benny, Benny” and waving Israeli flags that he will not let a new government be formed by a prime minister with an indictment hanging over his head. He thanked Netanyahu for his years of service in the position and added: “We will take over for him.”

Gantz added that his government would have zero tolerance for corruption, another swipe at Netanyahu, who is at the center of at least four corruption investigations, and faces indictment in at least one of the cases either before or immediately after the April 9 elections.

Gantz also said that Jerusalem will remain Israel’s “eternal capital,” that he will strengthen settlement blocks, and that Israel will not give up the Golan Heights. He also said his government would pursue making peace with the Palestinians and Israel’s Arab neighbors.

“There is nothing more dear to me than the state of Israel. For me Israel comes before everything else,” he said. “The Jewish people and the Zionist state is a great story, unparalleled, bigger than any leader. We are one nation, we have one flag, one anthem and one army,” he also said.

On Monday, the party released a campaign jingle, which states: “There is no right wing or left wing, there is only Israel, before everything else.”

Gantz, 59, served in the IDF as a paratrooper and became a career army official. He commanded several units, including special operations units, before serving as the head of Israel’s military from 2011 to 2015. Several existing parties courted Gantz to run with them in the upcoming election before he decided to make his own.