12 Jewish (or Jewish-adjacent) races to watch 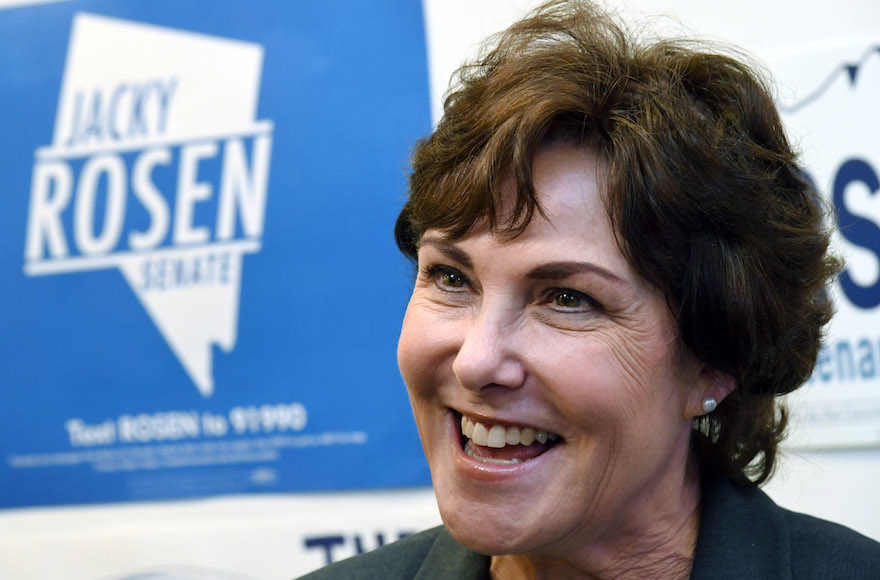 Nationwide, Americans will be watching the electoral map to see if a “blue wave” sweeps Democrats to control of the House of Representatives, and maybe even the Senate, or if Republicans hang on to one or both houses. And in a number of cases, Jewish candidates or issues will be central to which party wins and loses when the votes are counted.

Will former synagogue president Jacky Rosen, a Democrat, unseat Sen. Dean Heller in Nevada? Which Jewish candidate will win on eastern Long Island? Will Illinois and Colorado end the night with Jewish governors-elect?

Here are 11 candidates and (mostly) close races that Jews should watch as the night unfolds. (The forecasts come from the FiveThirtyEight political website.)

This race between Jewish candidates on the eastern end of Long Island has become a battle over President Donald Trump. Zeldin, one of two Jewish Republicans in Congress, is an outspoken supporter of the president and has received his endorsement. Gershon reviles Trump and says a visit to the U.S. Holocaust Memorial Museum in Washington, D.C., inspired his run to combat authoritarianism.

The polls: A Democratic polling group, GBA Strategies, had Zeldin up by 6 points in early October. Late in the same month, the nonpartisan Change Research had Zeldin ahead by 15 points.

The forecast: Zeldin has a 93.5 percent chance of keeping his seat.

Epstein, a Jewish businesswoman with roots in the suburban Detroit Jewish community, raised eyebrows shortly after the shooting at a Pittsburgh synagogue by inviting a defrocked Messianic rabbi to address a rally headlined by Vice President Mike Pence. Jews of all stripes don’t take kindly to the various “Jews for Jesus” movements. Epstein was the chair of Trump’s 2016 campaign in Michigan. She is running to replace Republican David Trott, who is not running for re-election.

The forecast: Epstein has a 20 percent chance of keeping the seat red.

Slotkin, who is Jewish, was raised on a farm and worked for the CIA. She is hoping to flip this district to blue and has been endorsed by former President Barack Obama.

The polls: RealClearPolitics has Slotkin up 2 points on her opponent, incumbent Republican Rep. Mike Bishop

The forecast: Slotkin has a nearly 67 percent chance of winning. 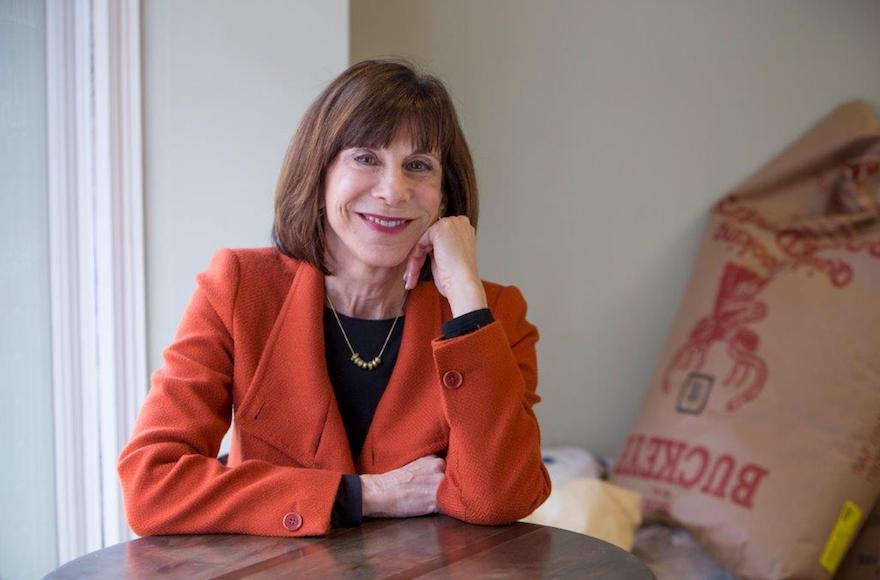 Manning, a philanthropist, had a long career as a Jewish organizational leader before running for Congress in central North Carolina this year. She was the first woman to chair the Jewish Federations of North America and was a founder of Prizmah, an umbrella association for Jewish day schools.

The forecast: Manning has a 38.7 percent chance of winning.

Schrier, a Jewish pediatrician, is hoping to flip this seat after the retirement of Republican Rep. Dave Reichert. She says she was partly inspired to run after seeing the 2017 neo-Nazi rally in Charlottesville, Virginia. She has been endorsed by Obama.

The polls: The New York Times has Schrier edging her Republican opponent, Dino Rossi, by 3 points.

The forecast: Schrier has a 67 percent chance of winning.

Luria, a Jewish former Navy commander, is running in this coastal Virginia district that encompasses the Norfolk U.S. Navy base. She once organized a Passover seder on an aircraft carrier. She’s trying to flip her district to blue.

The forecast: Luria has a nearly 33 percent chance of winning.

Cockburn, a former producer for the CBS newsmagazine “60 Minutes,” has gained attention in Jewish circles as the co-author of the 1991 book “Dangerous Liaison: The Inside Story of the U.S.-Israeli Covert Relationship,” which harshly criticizes Israel. She is seeking to replace retiring Republican Rep. Thomas Garrett, a Republican who is retiring, in a district that includes Charlottesville.

The polls: A New York Times poll from mid-October had Cockburn in a virtual dead heat with Republican Denver Riggleman.

The forecast: Cockburn has a 46 percent chance of winning.

King, who has a history of provocative statements, has made headlines recently for his associations with and support of white supremacists. He has endorsed Faith Goldy, a far-right candidate for mayor of Toronto, shared anti-immigrant rhetoric with  a far-right publication in Austria and retweeted a neo-Nazi. Two Jewish leaders in his state condemned King in a letter to the Des Moines Register, and the National Republican Congressional Committee says it will not support him.

The polls: RealClearPolitics has King up by 7 points on Democratic challenger J.D. Scholten.

The forecast: King has a nearly 86 percent chance of keeping his seat.

Rosen defeating Heller is a must if Democrats hope to retake the Senate.

The polls: RealClearPolitics has the race as a dead heat.

The forecast: Rosen has a 57 percent chance of winning. 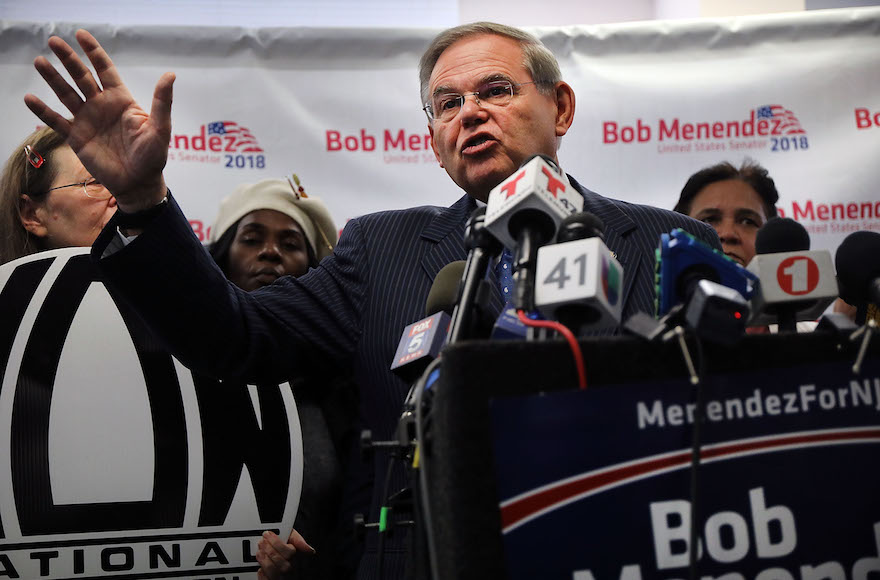 Menendez is not Jewish, but is known as one of the most staunchly pro-Israel senators. He was one of two Democratic senators to vote against the Iran nuclear deal in 2015, opposing Obama and much of his own party. Menendez’s campaign has been tainted by his trial for corruption — a mistrial was declared last last year.

The polls: RealClearPolitics has Menendez up by more than 10 points over Republican challenger Bob Hugin.

The forecast: Menendez has a 94.6 percent chance of winning.

Pritzker, a billionaire venture capitalist, is running to unseat Republican Bruce Rauner, himself a multimillionaire many times over. The race — surprise, surprise — is one of the most expensive in the country. Pritzker is a centrist Democrat who got into trouble for saving on property taxes by removing toilets from a home he owned.

The polls: Pritzker has led comfortably in all of the recent polls.

The forecast: Pritzker has an 84 percent chance of winning.

Polis, a former tech mogul who won election to the House of Representatives in 2008 when he was 33, will become the first gay and first Jewish governor of Colorado if elected. His campaign has focused on renewable energy, education and income inequality. He would succeed John Hickenlooper, a Democrat who is not seeking re-election.

The polls: Polis has led Republican Walker Stapleton by 5 to 8 points in recent polls.

The forecast: Polis has a 95 percent chance of winning.